I do not keep it a secret that I am from Michigan. I wear my Mitten State proudly on my sleeve. When I became a teacher, I always hoped that I would teach fourth grade. Why? Because at the time, that was the grade in which your state history was taught. I'm not sure if it's just my genes or if it is because of those 10 hour car rides each way three times a year to visit my family, but I have always been in awe of the beauty and uniqueness of my home state. Several years ago a wonderful author, Kathy Jo Wargin, coupled with an amazing illustrator, Gijsbert van Frankenhuyzen, began publishing books on legends in Michigan. They are a fantastic set of books. Not only do they create an amazing picture of Michigan, but it is a great way to teach legends.

What is a legend?

When teaching reading for understanding, one of the areas that teachers focus on is teaching genres of literature. Legends are one of the genres that is taught at some point in the education of children. Legends are stories created to help "explain" some sort of phenomenon or event. Many legends explain the geography of land or the climate of an area but in general the story tells something about nature.

The Legend of Michigan

Michigan is one of the most geographically unique states in our nation. It not only is surrounded by the Great Lakes, it is also the only state that has two peninsulas. The Legend of Michigan, written by Trinka Hakes Noble and illustrated by Gijsbert van Frankenhuyzen, is a well composed story that helps to explain the climate and seasons of Michigan. In the story a young boy travels to find resources for his starving village. Along the way he meets a wise elder that helps him to work with the North Wind to relinquish the icy, cold, vast land of Michigan in order to make it more habitable. Noble does a wonderful job of helping to explain why we have the seasons that we do and why they are for as long or as short as they are. 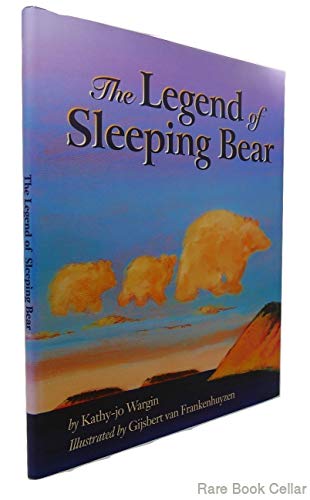 The Legend of Sleeping Bear

The Sleeping Bear Dunes in Michigan is a great place to visit. It is located on the coast of Lake Michigan just to the west of Traverse City, Michigan. Several years ago I visited the dunes with my sister and her family. We had a great time hiking the dunes and visiting the spot that inspired this beautiful tale. We even brought this story along with us so that the children could hear the legend before we visited the dunes.

The Legend of Sleeping Bear is one of my favorite legends. It is a tear jerking account of how a mother bear and her cubs escape a forest fire in Wisconsin. They begin to swim across the lake but the cubs cannot keep up. She waits for her cubs to come ashore but they never arrive. She falls asleep at the shoreline and as time passes, she is covered in sand as a blanket to keep her warm. The great spirit of the land is touched by her love and dedication and brings the cubs closer to shore as the North and South Manitou Islands and Mother Bear is the sand dunes watching over her cubs for the rest of time.

The Legend of the Petoskey Stone (Myths, Legends, Fairy and Folktales)
Buy Now

The Legend of the Petoskey Stone

The Petoskey Stone is Michigan's state stone. It is a beautiful stone that is actually a fossil of coral found in Michigan. Kathy Jo Wargin combines some facts with legend to create this beautiful account of hope for a new day. In 1787 an Odawa Princess and French Fur Trader gave birth to a beautiful baby boy in the early light of the morning. Because of this his father named him Petosegay which means "rays of the rising sun" or "sunbeams of promise." He knew at that moment that his son would become an important man. As the story continues, the Fur Trader was quite right. His son, Petosegay, became a talented hunter and fisherman. He was well liked by all around him and as the land around him eventually became inhabited by pioneers, Petosegay befriended them. Out of respect, they began to call him chief and eventually named the new town after him, Petoskey.

Since this fossil was found often around this area, it was eventually named the Petoskey Stone. In the story, the father who is recounting the tale to his son tells him that when he finds a Petoskey Stone, he carries the spirit of Petosegay and the promise of a new day with him.

The Legend of the Lady's Slipper
Buy Now

There are many other beautiful legends that touch the landscape and wildlife of Michigan. Kathy Jo Wargin and Gijsbert van Frankenhuyzen are talented team. Wargin's words and van Frankenhuyzen's illustrations make the stories come alive. I look forward to hear the magical tales each time a new story is published. Additional legends include:

Take some time to read them. You will find such delight in the magic and hope found on the pages of these legends.