A Mother's Book Review: A Stolen Life by Jaycee Dugard

"This book might be confusing to some. But keep in mind throughout my book that this was a very confusing world I lived in. I think to truly begin to understand what it was like, you would have had to be there, and since I wish that on no one, this book is my attempt to convey the overwhelming confusion I felt during those years and to begin to unravel the damage that was done to me and my family." Jaycee Dugard, A Stolen Life

I noticed this book on the 14-day shelf at the library and picked it up on a whim. Though the story has by now become very well-known, I realized as a scanned the inside jacket that I knew relatively little about it.

I expected the book to be ghostwritten and therefore did not have high expectations for what I assumed was a publicity ploy by Jaycee's attorney, to help her fund the rest of her life and keep the media off her back. I was wrong. The book is clearly written by Jaycee herself, and though she is by no means a professional writer (which she apologizes for at the beginning), I was captivated by her honesty, her straightforward approach, and her very authentic voice, from the very first moment I opened it.

The book opens on the day Jaycee was kidnapped. She talks about feelings of anger at her mother, who forgot to kiss her goodbye that morning, fear of her step-father, who is arguably emotionally abusive, and the unconditional love she feels for her two year old half-sister, still asleep in her crib. At eleven years old, Jaycee awoke that day to a quiet house, got dressed alone, made her own breakfast, and walked to the bus stop unnoticed. Before arriving however, two strangers using a taser gun put Jaycee in the back of a car and drove her to the place that would serve as her prison for the next eighteen years.

Jaycee's captors, Phillip and Nancy Garrido, lock Jaycee in a small building behind their house, with her arms handcuffed behind her back, for several days. Phillip arrives once a day to leave Jaycee a meal of fast food. The room holds nothing but a dirty mattress on the floor and bucket in the corner to serve as a toilet. The first several chapters detailing her capture and imprisonment contain the most graphic details of the sexual abuse and rape she endured, before she was even old enough to know what "sex" was. In addition to the physical horrors inflicted upon her, she writes of profound loneliness, confusion, and thoughts of home. She includes that she worries her step-father will be angry at her for not coming home from school the day she was taken.

Phillip Garrido, a convicted sex offender, explains to Jaycee that he has a "sex problem" that she is helping him with. Every time he rapes her, he reminds her that she's helping him not to do this to anyone else. Most often the experience lasts several hours, and includes the playing out of Phillip's sexual fantasies involving children. He is often high on drugs during these episodes.

Within three years, Jaycee gets pregnant. During this time, description of the sexual abuse and rape stop. She gives birth to a baby girl, and it is the first time she remembers what love feels like. She admits that Phillip rapes her with far less frequency after the birth of her first child, but she gives birth to another baby girl three years later. The three live in one of two buildings in the backyard of the Garrido's house. Nancy and Phillip are present in the raising of the two daughters, and call themselves, all five of them, a "family."

The rest of the book focuses far less on the imprisonment and physical abuse, and goes into more detail of day to day life. Jaycee writes from memory and presents things as she interpreted them,. She talks of different animals, mostly cats, that she took care of. She writes of the money making opportunities Phillip dreams up, and how she helps him accomplish these. In the middle of the book she includes actual journal entries that she wrote while imprisoned, thus revealing thoughts of further loneliness and confusion, but also guilt and the desire for self-improvement. In short, the manipulation and emotional abuse Phillip Garrido is glaring to everyone but Jaycee.

He speaks constantly of God and the Bible, and the presence of "angels" controlling his thoughts and his actions. He hears voices, and often makes Jaycee sit for hours wearing a home-made device that is supposed to allow her to hear the voices as well. He makes excuses for his behavior and does not allow Jaycee or anyone else to question him.

By the time Jaycee is eighteen years old, she has been in and out of the backyard several times, running errands with Nancy and Phillip. She and her daughters, by this time, are free to go into the main house. Throughout these years, Phillip has been visited regularly by parole officers. After one such visit, Phillip becomes very agitated and thinks it would be best if everyone, Nancy, Jaycee, and the two girls, go with him the next day to the parole office. He gives Jaycee a story to tell the officers if they ask any questions. Throughout the visit Jaycee is questioned by different officers, and each time she sticks to the story Phillip has practiced with her. She is most afraid of having her daughters taken away from her. At one point, she is lead into a room and asked to say her real name. She has not said it in eighteen years. She spells it out on a piece of paper.

The rest of the book chronicles Jaycee's reunion with her mother and younger sister, and the therapeutic process of moving forward with her life.

It is difficult to process this book with any sense of logic or organization because, although chronological, the book itself is not written with a lot of logic or organization. In this way, it truly embodies the totality of what Jaycee could never know nor fully understand. My first reaction obviously came from the mother in me. Though kidnapping is a nightmare no parent even wants to imagine, I of course immediately began to question myself about ways I can prepare my own children to remain safe and to be as assertive as possible. My next reaction went immediately to Jaycee's sense of insecurity, even before she was captured. I thought about how often I tell my daughters I love you, how I can build them up as women and individuals, and how I can consistently provide emotional and physical security in our home. In many ways, Jaycee was lacking these things even before she was kidnapped.

After digesting the bulk of my shock and horror, I sat down and watched the Diane Sawyer interviews from ABC.com. Many people initially reacted to this story with the common questions: "Why didn't she ever seek to escape? Why didn't she fight for her life and her freedom?" This book makes very clear the manipulation through fear and neglect that Phillip inflicted on Jaycee. It is my unprofessional opinion that eighteen years of physical, emotional, and mental captivity caused Jaycee Dugard, in several facets, to remain stuck at eleven years old. Throughout her writing and the details of her therapy, even in interviews, it seems obvious to me that much of her understanding, her maturity, and her fear continues to be expressed from a place in herself that remains eleven years old.

Who Should Read This Book?

Humans form connections through story telling, and it is important for each one of us to have the opportunity to have our stories heard. The author's primary purpose for writing this book is to expose the horror of her situation, reveal her captors for who they really were, to begin the process of healing, and most importantly, to connect herself to others.

I think anyone who is emotionally mature enough should read this book. It does not serve as a manual for how to survive a kidnapping. Instead, it exposes some the evil that exists in the world. It reveals the heart and attitude of one young woman who not only survived, but maintained the capacity to love and to move on. I am finding myself reacting to Jaycee's story very similarly to how I react to stories about the Holocaust. We must give ear to the survivors. We must acknowledge that these things happened. And we must form connections to these people, not because we can empathize or because we have experienced something similar, but simply because we are human. 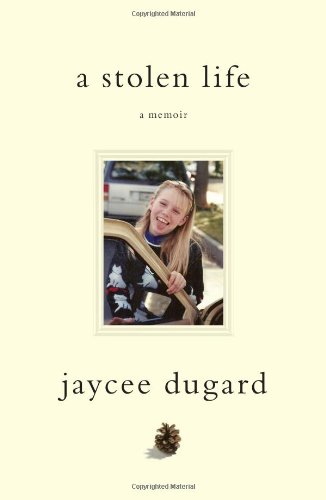 A Stolen Life: A Memoir

Jaycee Dugard's memoir of her eighteen years in captivity.