Mighty Mom is a keen observer of life. She shares her personal experiences and opinions in helpful and often amusing ways.

Everyone Loves the Rhymes

Generations of children have cut their reading teeth on the simple rhymes and elaborate illustrations of Dr. Seuss books. The endearing characters of these books live on in our memories. The rhyme schemes also live on, adapted for every imaginable purpose, including parody, movies and even a Broadway show entitled "Seussical the Musical."

My own Seuss immersion started with the classic The Cat in the Hat. Who can forget the wreckage wrought by this mischievous feline and his cohorts in crime, Thing 1 and Thing 2? Later, there was The Cat in the Hat Comes Back , but, like so many movie sequels of today, it failed to reach the heights of hilarity of the origiinal.

The Odd Book Out

My favorite Seuss book, however, breaks that mold. It is not written in rhyme. It is written in prose.

Yes, it appears that even as a young lass I craved more sophistication in my reading. (But no, I did not tackle War and Peace or Finnegan's Wake before the age of 10:-).

My favorite Dr. Seuss book is called The 500 Hats of Bartholomew Cubbins.

Roll the word "Bartholomew" around on your tongue for a bit and you'll see why it appealed to me so much. It's just fun to say, isn't it?

Then there's the story itself, which reads like a fairy tale of sorts. King Derwin, ruler of the Kingdom of Didd, requires that hats be removed in his presence. Well, duh. With a name like Derwin, respect probably does not come naturally, does it? You'd pretty much have to command it.

Young Bartholomew, though poor, is a good little boy. He sincerely attempts to comply with the order. He is not deliberately being disrespectful. The problem is, each time he tries to remove his hat in order to bow to King Derwin, a new hat appears on his head.

Finally, the King has had enough of this outrage. Bartholomew is not only in comtempt, but he's littering the streets of Didd with his hats. Clearly, this cannot stand!

King Derwin does what kings of that era always did when they didn't know what else to do: He orders Bartholomew Cubbins put to death.

Bartholomew tries again and again to remove his hat. Again and again a new hat replaces the one he takes off. Each successive hat is fancier and more elaborate than the one before it.

Poor Bartholomew is not doing this on purpose. He has no idea why these hats keep growing on his head. He takes a hat off, another one pops on.

All told, Bartholomew leaves a trail of 499 hats behind him.  King Derwin becomes increasingly enraged. How dare this young upstart defy his order! How dare Bartholomew Cubbins mock him, the leader of the Kingdom of Didd!

Just as Bartholomew is facing the ultimate punishment for disobience, something magical happens.

He removes the 500th hat from his head.

Now, this hat is tight. I mean, a real pimp daddy's dream. It has more feathers, gems and gold on it than the King's own crown.

King Derwin is so in awe of this pimpin' lid that he cuts Bartholomew a deal. First, he will spare Bartholomew's life -- good thing, as it would be bad PR, not to mention karma, to off a young subject who is now in full compliance of the law.

Second, in exchange for the magnificent hat, he'll give little B-man 500 gold coins. I don't know how he arrived at that number, but I'm guessing it might be one coin for each hat... King Derwin gets his hat and Bartholomew goes back to his 'hood 500 gold coins richer.

Does everyone live happily ever after? They never say that, exactly. This is Dr. Seuss, after all, not Hans Cristian Andersen or the Brothers Grimm.

What I do know is the hat makes King D happy (I will resist any speculation on King D's sexual proclivities), and Bartholomew Cubbins ends the day with 500 more gold coins than he started with.

This being G-rated fiction, I will stick with the G-rated moral of the story, which is: keep doing what you know is the right thing to do. Even if some people seem impossible to please, keep trying your best. And eventually you will prevail.

Mr. Cubbins continues to receive royalty checks and now lives in a suburb of Didd with his wife and 500 little Cubbinses.

All's well that ends well in The 500 Hats of Bartholomew Cubbins.

What is your favorite Dr. Seuss Book? 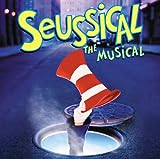