Get Hooked into My Wicked Little Lies

Welcome to a dangerous tale of intrigue, suspense and romance with a hint of espionage. In Victoria Alexander's My Wicked Little Lies, the 3rd installment of the Sinful Family Secrets series, she introduced us to a happily married secrets who both have secrets to hide. In a former life, Evelyn loved to seek adventure as a spy known as "Eve", before she married Adrian. Little did she know, Adrian kept his true identity known as "Sir". Both of them were set upon the same mission of finding the theft of missing confidential files before they would've been exposed to the ton. In a game of sharp wits to be one step ahead of one another with cunning ruses and sweet lies, they realized they meant something to one another, when danger fell upon them in the end. After their game of charades were over and confessed their darkest secrets, they realized that true love really conquered all.

Check out the video trailer down below! 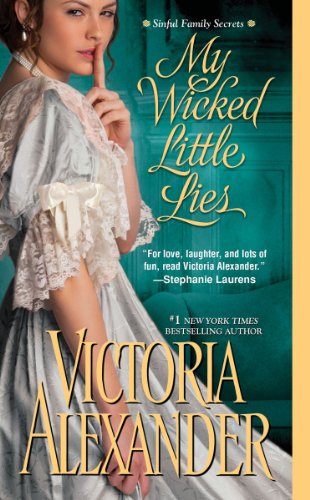 My thoughts on the novel

It's a rarity to have a happily married couple to be the main leads of a historical romance novel, when you usually have two lonely people to find each other and seek out true love. But for this novel, it worked well. I really enjoyed how Adrian's family welcomed Evelyn into their warm and loving arms to make her one of their own family, when each one of them had overcome an obstacle as well. I didn't care much for Beryl Dunwell, who shouldn't been sleeping around on her husband, though they led separate lives, and created gossip for fodder and a scandal. I also enjoyed how Eve's best friend and Adrian's colleague Max had a secret of their own for a perfect subplot. This had me gripped on the first page to see how it all played out with a fitting conclusion with tears of joy and sighs of happiness.

Victoria Alexander is an award-winning television reporter, until she discovered that fiction is much more interesting than real life. She turned to writing full time and is still shocked it worked out.

Since the publication of her first book in 1996, she had written thirty-five full length novels and six novellas. The Perfect Wife--originally published in 1996 and reissued in March 2008--hit #1 on the New York Times list. Sixteen of her books are bestsellers hitting the New York Times, USA Today, and/or Publishers Weekly bestseller lists. With books translated into more than a dozen different languages , she has readers all around the world, and has twice been nominated by the Romance Writers of America prestigious RITA award. In 2009, she was given a career achievement award from RT BookClub, and was named Historical Storyteller of the year in 2003. In 2008, she was the keynote speaker of the RWA national conference in San Francisco. Victoria credits much of her writing success to her experience as a reporter.

Her years as a broadcast journalist were spent in two radically different areas of the country: Nebraska and West Virginia. In West Virginia, she covered both natural and man-made disasters She was on the scene, when a power plant accident in a small town left fifty-two men dead. She once spent a night on a mountain, waiting to learn the fate of coal miners trapped in a mine collapse. Victoria was producing the newscast, when her husband (who worked also at the TV station), and several other journalists were held hostage by a disturbed Vietnam veteran.

In Nebraska, she reported on the farm crisis and watched people lose land that had been in their families for generations. She covered the story that was the basis for the movie, BOYS DON'T CRY, and once acted as a link between the police and the gunman who had barricaded himself at his home. Her investigative work exposed the trucking of New York City garbage to a small town dump in rural Nebraska.

During her journalism career, Victoria covered every president from Ford to Clinton. She knew firsthand what it felt like to be surrounded by rising flood waters and inside a burning building. She’d interviewed movie stars including Kevin Costner, ridden an elephant and flown in a governor’s helicopter. She covered a national political convention and Pope John Paul II’s historic visit to Denver as well as small town festivals celebrating everything from walnuts to Glen Miller. Her work was honored by numerous organizations, including the Associated Press who called a feature about a firefighter’s school "story telling genius". It was the encouragement she needed to turn from news to fiction. She’d never looked back.

Victoria claims her love of romance and journalism was to due to the influence of her favorite comic book character: Lois Lane, a terrific reporter and a great heroine who pursued Superman with an unwavering determination. And why not? He was extremely well drawn.

Victoria grew up traveling the world as an Air Force brat. Today, she lives in Omaha, Nebraska with her husband and her dogs. Victoria had two bearded collies, Sam and Louie (named from characters in one of her books). Sam, the best dog in the world for 13 ½ years, passed away in September 2010. Louie took on the position of loyal companion, and did a fine job, even though he doesn't understand that kitchen counter surfing is not allowed! Now he's been joined by Reggie, also a faithful companion.

They all live happily ever after in a house under constant renovation and the accompanying parade of men in tool belts. And never ending chaos. Victoria laughs a great deal—she had to.

Check out Victoria Alexander's Millworth Manor historical romance series in this order for your Kindle and in paperback book versions: