Diana Killian also has another series, the Poetic Death series, about a U.S. literature teacher, Grace Hollister, who moves to the English Lake District of Wordsworth and the Lake Poets.

The Poetic Death series has five books so far: 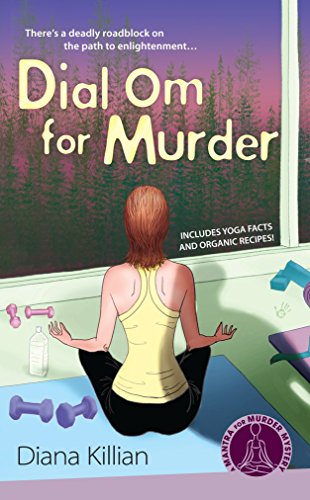 Dial Om for Murder (Mantra for Murder Mysteries, No. 2)
A.J. inherited a yoga studio from her aunt, Diantha. A.J.'s ex-husband is having some problems with his significant other, so he goes to visit A.J., whose mom is in Egypt. She comes back early, which doesn't help A.J. much, with any of her problems --- romantic, homicidal, yoga business-related. I thought this book was witty and well-done. A great, fun read. A little too much violence to be a cozy, though.
Buy Now

This series features an amateur detective who owns a yoga studio, has a boyfriend who is a cop, a gay ex-husband, and a dog.

Dial Om for Murder is the second book in this series of four.

Here they are, in chronological order:

There are some yoga instructions and a recipe in each mystery of this series. They're short, simple and to the point.

I usually have trouble with yoga instructions, but these ones are okay, even for a yoga illiterate like me.

A.J. Inherited the Studio From Her Aunt

Her aunt Di --- short for Diantha --- was murdered in the first book in the series, Corpse Pose.

A.J. inherited her aunt's yoga studio, and therefore is perhaps a suspect in the murder. I don't know if I'll read and review Corpse Pose or not.

Dial Om for Murder was a little too violent for me.

I tried to include a link directly to Diana Killian's Facebook page, but apparently that's not the way it works with Facebook. You can just search for her name in the Facebook search box, though. Her page is the first one that comes up.

Facebook is probably the best way to keep in touch and up-to-date.