Neil Gaiman's 2005 novel Anansi Boys is a clever tale of the sons of Anansi, the spider who often appears as a man (no, not Spiderman) in West African and Caribbean folklore. In the traditional stories involving Anansi, he is the trickster, much like the figure of Coyote that we see in the traditional folklore of many Native American groups or the Monkey (Sun Wukong) in Chinese tradition. In Gaiman's novel, he maintains that same fun-loving character, and creates all manner of mischief for his boys, Charlie and Spider, along the way. But at heart, this minor deity is simply a father who loves his sons (no matter how embarrassing his son might find him), and takes a lot of pride in their development into men who will make their own ways in the world(s) of humans and gods.

High Points of the Book

Gaiman is one of the cleverest writers of our day. He is funny, and he uses language in wonderfully inventive ways. He weaves tradition into our modern world in a way that can't help but make the reader smile — perhaps causing outbursts of laughter from time to time. (You've been warned. Read it in public places at your own risk.)

The high points of Anansi Boys come when Fat Charlie starts piecing together what exactly happened to him back in his childhood, and begins to figure out why he's always been such a loser in life. As his confidence grows, the story starts to accelerate, and takes us along for a rather wild ride. It gets confusing, and is lots of fun from beginning to end.

One of my favorite elements woven into the story is the use of song. In an interview with Gaiman included in the book, he comments on the fun he had choosing karaoke tunes to highlight in his novel. I can just imagine the joy he must have had in creating the tale, because reading it is already quite entertaining.

There's really nothing in the novel not to like. It moves along at a good pace, rarely bogging down at all. Grahame Coats is pretty despicable, but then, I think he's supposed to be. Other than that, all is good in Anansi Boys. 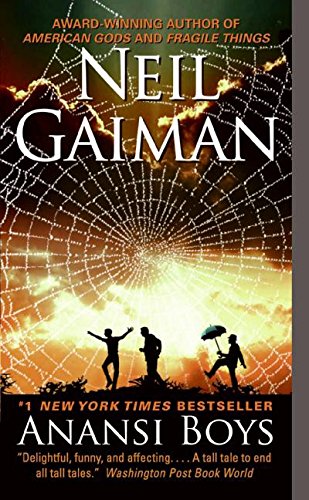