"The Prince" by Niccolo Machiavelli Summary

How does the past influence Machiavelli's thoughts, actions, and values in the The Prince?

History is an acceleration of human thought. The culmination of human greatness only quickens as we progress further and the information generated previously can be used to propagate new ideas seamlessly. There would be no Bugatti Veyron if it wasn’t for the Mesopotamians invention of the wheel, the subsequent colonial invention of the carriage, and relatively recent Ford Industries invention of the Model T; there would be no Newton’s Laws of Motion if it wasn’t for Kepler’s detailed observations of the cosmos; and if it were not for the success of Spirit (1997) and Opportunity (2003) the new research in association with the Mars rovers in development now by NASA, namely Curiosity and MAX-C, would be unfounded. Inasmuch as these various examples portray historical influence on future human innovation, so too does Niccolo Machiavelli’s modern political manifesto, The Prince, written in 1513. As a scholar and professional historian, Machiavelli’s attitude towards politics and values therein are molded and shaped as logic so facilitates. Machiavelli uses historical references as the basis of his argument, building his theories, therefore, on a wide range of prior human governmental systems and their actions in response to a certain array of circumstances. Using history throughout most every chapter, Machiavelli discusses the implications therein on numerous phenomena with regards to establishing, maintaining, and furthering ones dictatorship; and expresses vociferously his corresponding stance. Connections between history and Machiavelli’s The Prince are represented in the origin of the book and various ideas that are presented including: which category of states are more easily conquered, how to go about conquering them, and, once conquered, how to maintain them.

Machiavelli's Use of History in The Prince:

Having lived through, and therefore observing closely, the constant failure of the Italian monarchy during the time, Machiavelli was provoked to write The Prince. In an attempt to effectuate real change, Machiavelli dedicated his discourse to Lorenzo the Magnificent who, being the newest of the Medici rulers, could have very well implemented those ideas argued throughout the Prince. In this way, Machiavelli’s The Prince precipitated directly from historical influences. Additionally, the very content of the book draws a correlation between the two as Machiavelli uses his familiarity with history to validate his treatise which history—that is the perpetual difficulties that plagued the Italian monarchy—led him to write in the first place. In short, without Machiavelli’s personal history there would be no nexus for creating the Prince, and without Machiavelli’s aforesaid familiarity with the culmination of all history there would be no source from which Machiavelli could draw his conclusions--this portraying, therefore, the interconnectedness of the two. With this, history is shown to influence Machiavelli’s creation of The Prince and his ideas established within.

Historical Characters in Machiavelli's The Prince:

Machiavelli portrays a host of historical figures and countries throughout the Prince. Preeminent among these is one Alexander III of Macedonia. A conqueror and dictator dating back to the 3rd century B.C., Machiavelli discusses his importance in history and how his actions and the corresponding reactions during the time can elucidate matters of political strategy. In chapter four, Machiavelli discusses the possible outcomes of a newly acquired state, and how the states ideological spectrum and governmental system should play into a prince’s approach. After maintaining that a principality governed solely by a monarch trumps a principality whose power is distributed amongst a monarch and his barons who the people “are naturally attached to”, Machiavelli then interjects the historical example provided by Alexander the Great that validates this concept. Being that Alexander the Great avoided “frequent rebellions [like those of] Spain, France, and Greece against the Romans”, Machiavelli validates his point stressing a principle monarch absent the parasitic barons, as those states that rebelled incorporated the latter while Alexander’s Asian annexations had no such institutions and were easily pacified. Therefore, once Alexander successfully removed those dictators in power, replacing himself in their stead, his reign was preeminent and his policies unchallengeable. With this incorporation of historical evidence Machiavelli’s underlying message to Leonardo the Magnificent becomes plainly evident: avoid at all costs those hereditary barons who command the respect and allegiance of the people.

Machiavelli on When, When Not, and Who to Conquer:

Further outlining the pros and cons of acquiring one state over another, Machiavelli shows how, all the while using historical references as evidence, there are multiple factors that must be addressed in order to make a sound decision. For example, although the Asian countries annexed by Alexander the Great are more easily managed once conquered, being that their centralized government leaves no room for dissention, Machiavelli explains how the initial act of conquering such a totalitarian state should prove difficult as the unification therein is certain to provide a formidable repellent force. And it is in this way that Princes are deceived. Because the lackadaisical attitude and readily available subterfuge of distributive monarchies make annexation by foreign countries relatively easy and the decisiveness of centralized monarchies make annexation more difficult, Princes are naturally more apt to seek the former which, although easily acquired, provides no lasting benefit as “infinite difficulties arise”. Case in point, the initial hitches associated with conquering centralized monarchies must be accepted as decentralized monarchies have no inherent value and are thus useless—as evident in Machiavelli’s incorporation of the Roman example whereby annexation of France proved worthless being that, due to France’s decentralized government and conflicting power structure, they rebelled.

Furthermore, in matters pertaining to acquiring and defending states, Machiavelli discusses specifically the significance of the army, and how, historically speaking, specific categories of armed forces have fallen short or triumphed in various situations. Machiavelli portrays clearly the incompetent and barbarous nature of mercenaries in the past. Using his own Italy as an example of how detrimental mercenary soldiers have been, Machiavelli shows how it was that King Charles of France was able to take sacred Italy with ease. This historical example portrays the destruction of mercenary soldiers as Italian ruin was borne out by “nothing else but her having relied for so many years on mercenary soldiers”. Moreover, Machiavelli introduces the example provided by the ancient Carthaginians who were “oppressed by their mercenary soldiers”, even as the mercenary captains were citizens—which then begs the question: how much greater should the probability of a foreign-led mercenary army be in assuming a dictatorship and instituting arbitrary law? In addition to mercenary armies, princes have the option of auxiliary forces (foreign aid). However, Machiavelli eliminates this avenue as well, stating that with auxiliaries their danger “lies with courage” and are therefore “as useless as mercenaries” whose danger lies in unwillingness to fight as both result in an ineffectual army. Using Cesare Borgia as the historical evidence that validates this notion, Machiavelli outlines Borgia’s increased reputation as he went from “leading forces comprised entirely of French soldiers”, to leading the mercenary Orsini and Vitelli armies, to finally relying “on himself and his own soldiers”. Because Borgia “was never so highly esteemed as when everyone saw he was the sole master of his forces”, Machiavelli’s notion bespeaking the uselessness of auxiliaries and mercenaries is magnified. It is with this culmination then of historical references that truly validates Machiavelli’s principles.

Despite the Prince being written almost half a millennium ago its success in modern society is perhaps greater. Today it is viewed as a requirement for anybody pursuing political science or history—being that, as discussed in this essay, Machiavelli’s argument is intertwined with historical references. Ironically, as The Prince is a work of history, and the modern mindset towards the Prince is as previously stated, we draw seemingly parallel amounts from our history in creating modern politics as Machiavelli drew from his history in creating The Prince. There is doubtless a correlation between human progress and history, whether realized through books, cars, space exploration, or innovations of any kind. 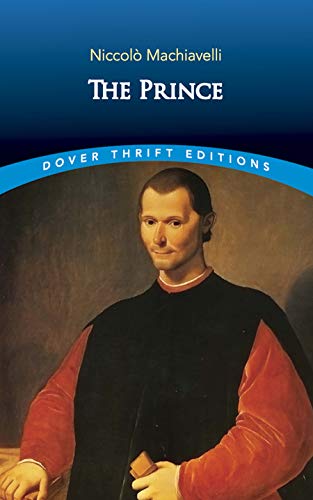