Larry Kolowski was just okay. Christina tried to make him cuter in her mind, but she couldn't. Not with his lazy eye. I can't be seen with him, she thought to herself. She didn't particularly like that fact, but there it was: a fact. Plain and simple. Just like Larry. Well, he wasn't simple, that was for certain - but he was plain. And she was beautiful.

Christina Larsen knew she was beautiful like she knew she went to Pierce Academy High School in Jennings, Colorado. Like she knew it was winter and freezing out. It was simply something she was aware of. Sometimes a good thing, sometimes a bad thing. It wasn't always easy, being beautiful. With everybody looking at you, you had to constantly make sure you were perfect.

Larry liked Christina - everybody knew that -but Christina liked Darren. Darren Hill was exactly what she was looking for. Gorgeous, with sandy brown hair tumbled just right, hot green eyes, and a killer smile, Darren was the goal of every pretty girl at Pierce. But Christina had to have him. She knew that. Everybody knew that. It was unclear if Darren knew it, but that was because part of his allure was that he knew exactly how to play the game.

Larry did not have any idea how to play the game. Christina had to kick her friends under the lunch table to stop them from giggling when he would come over and tell her about the snowman he'd built with his little brother, or just come out and ask her to the movies. Right in front of everyone! She was nice to him once; her friends were not amused.

"Christina, have you lost your MIND?!" her best friend Liz asked Christina. "He...he's...he's not even popular!"

"Thank goodness - you scared me there for a minute! Oh, wait - your mascara is, like, totally smudged. You look like a freak!" She went hysterical laughing, and Christina started laughing too, only her laugh didn't sound as real. But Liz didn't notice.

One Wednesday afternoon in January after school Christina reapplied her lipstick and re-curled her eyelashes and did her usual painstaking search for the errant zit. She checked out the best route through the snow with the least chance of falling and looking dumb and walked two steps and bumped smack into Darren Hill.

He looked past her for what felt like an hour. Then he finally looked down and snapped his fingers, pointing at her.

"You're one of the cheerleaders, right?"

As she tried to formulate her witty response, she noticed he was texting.

"HEY, stranger!" Christina turned around and saw some girl she didn't know wearing a Simpson Prep jacket. She smiled but the girl looked only at Darren. "What's up, D?"

Christina mumbled something about her mom and dinner and left.

On the phone that night, Christina's friend Gabby was annoyed. "Why didn't you get him to ask you out?"

That week, Christina worked out a lot. She practiced her laugh. She didn't think about these things; her dad had always told her you didn't think about what you had to do, you just did it. And just did it she did. She had it down. Nothing like what had happened with Darren Hill was ever going to happen again. Couldn't. How would that look?

The next day she tried to like a Power Bar on her way to Math when she caught a glimpse of her reflection in a classroom window. She saw chestnut, shining hair and a sparkly pair of earrings and a shirt that was just tight enough and expertly applied makeup. She didn't look into the eyes staring back at her.

The first weekend in February was the school ski trip. One benefit of living in the mountains in Colorado was that she got to ski a lot. Christina loved to ski. She felt her freest on the slopes, especially when she skied alone, with no one watching her. Finally, that Thursday night, her new Iphone rang.

"The ski trip bus is lame. I'll pick you up at 6AM at your house tomorrow." She didn't mind the bus, but kept her mouth shut.

Liz told her to stop obsessing, of course she'd handled it well. Perfectly, in fact. Christina felt better when she heard that word. Christina loved that word. Perfect was like the Colorado snow, like 100% on a test, like the figure of every celebrity she'd ever seen on TV. Perfect was white and pure and beautiful. Perfect was Darren. Of course it was. Everybody said so.

The ride up to the slopes was okay - Darren talked mainly about himself, so Christina didn't have to think too hard about what to say. He told Christina that he was planning on staying with the lacrosse team long enough to get a college scholarship, but that he could take it or leave it. He laughed when he said it, as if to say that he was proud of the fact that he had dedicated 4 years of his life to something he could care less about. As Christina started to talk about herself, he didn't hear her and went on talking about the last time they'd won the championship and how it had been all thanks to him and how all the scouts were coming after him so he'd just told them all to take a number. He laughed after he said that too. He explained that the girl she didn't know from Simpson Prep was his ex-girlfriend from last semester. He explained that she was a real bitch and that he only pretended to like her now because his buddies gave him a hard time over his breaking up with her, since she was one of the most popular girls at Simpson. They sped past a farm with a snow family in front of the barn. For a minute, she thought of Larry and his brother and their snow man. She laughed to herself. She didn't know Darren could hear her.

"What's your problem?" He glanced at her over his driving arm.

"Oh...nothing, nothing!" She felt her face get hot.

"So Miss Christina, I've been dying to ask you a question..."

"Yes?" His eyes looked like a million colors in the early morning sun.

She almost choked on her Diet Sprite. "What?!"

"Your tatas are just so perfect, me and the guys were wondering...."

"Hey, lighten up. I'm gonna find out eventually anyway." They were stopped at a light. He leaned in to kiss her, his hand already moving in for the kill.

"What the hell are you in the car all alone with me for, then?" The light turned green and he was sullen as he stepped on the gas.

He laughed. "Sure I like you. Why do you think, of all the girls at school, I chose you to ride with me? You think I don't know what this'll do for your rep?" He started relaxing again. "That's why you know it's just a matter of time before we..."

Christina couldn't remember exactly what she'd left behind in the suitcase that was now in Darren's car, speeding down the interstate. All she knew was she had to keep running, as she'd started to do as soon as they'd stopped at the last light. She kept running and running until she felt her lungs would burst in the thin mountain air. She stood on a deserted road and stared down at her Iphone. The number was still there. She felt lightheaded as she watched her finger hit the button.

Christina knew it was him from 2 miles away. The faded, light green pickup truck everyone made fun of looked like a Rolls Royce to her now as it gracefully rounded the sinuous curves of the road. She hadn't wanted to, but as soon as he stopped and got out of the car, she burst into tears. Larry took her in his arms.

"God, you are so beautiful."

And he looked at her and she thought to herself that his lazy eye was the sexiest thing she'd ever seen.

And then he kissed her. And the February wind blew and her hair was a mess.

And it was perfect. 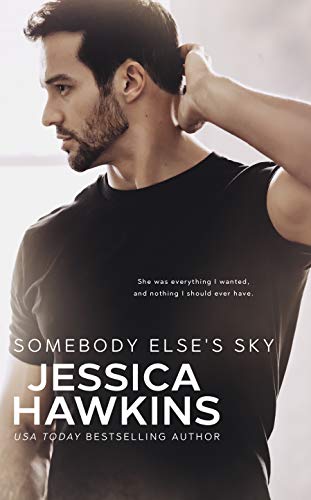 Somebody Else's Sky (Something in the Way Book 2)
Buy Now