Vanessa is a graduate of Southern New Hampshire University. She recently obtained her MA in English/Creative Writing/Fiction.

What is a Postcard Story?

A postcard story is a form of flash fiction. Basically, postcard stories must be complete in the sense that they have a beginning, a middle and an end. They need to have a character, a conflict and a resolution. They need to flow logically, just like a longer story, but a postcard story must be small enough to fit on a postcard, usually 3" x 5" often with artwork next to it or on the other side. Postcard stories usually run from 50 to 250 words, although there is no set amount. The word limits are usually set by the publisher.

On June 6,1966 Margaret Edelstein became the bride of Christ. She had a huge wedding ceremony which was attended by her family, her friends, and all her fellow sisters at the convent of Our Lady of Mount Carmel. She wore a pretty white wedding dress, a diadem of flowers, and a huge smile. She and the other sisters that were celebrating their own weddings recited vows of poverty, chastity, and obedience. They each were given a gold ring that they would wear as a lifelong symbol of their commitment to the life of a nun. They celebrated for the rest of the day, and then the people from the outside were sent home. The doors closed behind the new sisters forever.

At the wedding ceremony, all the new sisters were renamed under the rules of the Carmelite Order. They all received the first name of Sr. Mary in honor of the Blessed Mother. They also received a second name of a saint that was to be their patron. Margaret Edelstein’s new name became Sister Mary Stephen. From that day forward, she never saw the outside world again.

Sister Mary's life was the life of prayer. She spent hours on her knees praising God and pleading for positive results on the issues of the sisters and of the people in the outside world. She lived in a cell that contained only a bed and a candle. Her only property was two habits, one to wear, one to wash, a Bible and a rosary. She did whatever chores the mother superior laid out for her. She did not receive news of her family. She did not make her own decisions. She never had sex and would never have children of her own. She did not know the intimacy of human contact.

She lived quietly and humbly for the rest of her life, yet she was not sad. Sister Mary lived her simple existence with the joy that few people could understand. She looked forward to the future when she would sing with the Angels and praise her beloved Jesus for the rest of time.

On June 12, 2013, Margaret Edelstein, a.k.a. sister Mary Stephen, was finally called to go home. She went to sleep that night I woke up in the city where the streets were paved with gold and glittering jewels were everywhere. She was met by a man named Peter who took her to a beautiful room that contained everything she could ever want. Love was everywhere. The sound of the heavenly choir was more beautiful than anyone could conceive. Any pain she suffered on the earth was gone. She was as radiant as the sun. Her greatest joy came when she finally got to meet her husband face-to-face.

Would you enjoy a story that you can read on your smart phone in less than five minutes?

As I lay here, dying on the battlefield, all I can do is think of you. I remember the sunlight reflecting off the tears in your eyes. I remember how the scent of your shampoo enveloped me as the breeze played with your hair. I remember how deeply we kissed, and I can hear your voice as you whisper, “Be Safe,” and, “Come home to me.”

I did my best, but it was not meant to be. A bomb planted in an abandoned car exploded as we passed. I was too close. My foot is gone, and shrapnel tore several large holes in me. As my blood leaves my veins, I whisper “Forget about me. Be happy. I want you to be happy.” All that will be left of me is a white cross, a marker in a sea of memories. I want you to have so much more than that. I wonder if you can hear me. My life fades; my love never will….

Glory was sad, and her head hung low.

Soon it would be morning, and everyone knew that the Creator was coming to enjoy the garden. All the other flowers were beautiful, and so they stood tall. Everyone wanted to praise the Creator.

Glory, however, was a droopy vine, and she was sure that she was not good enough to honor Him. As morning approached, her heart broke, and her vines drooped even lower.

Just at the point when the sun poked its head over the eastern horizon, there was a great excitement in the garden. Birds sang. Bees buzzed. The flowers sent out their best fragrance. The Creator walked through the garden with great delight. When He came to Glory, He felt her sadness.

“Because I am not beautiful enough for You,” she answered.

“Do I make anything that is not beautiful?” He asked again.

“Well, no!” Glory answered. She raised her head and spread her petals wide for Him to see. From that day onward, no matter how sad Glory is, she always opens her petals in the morning to show her love to God. 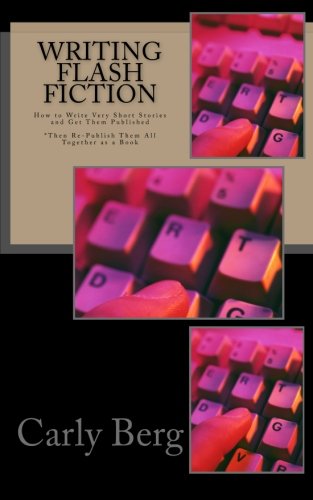 Writing Flash Fiction: How to Write Very Short Stories and Get Them Published. *Then Re-Publish Them All Together as a Book
I love to write postcard stories and other flash fiction. It's something I can work on in the in-betweens, it helps me be more disciplined, and there is a market for it. This book will help you get started, if you're interested.
Buy Now