Tomas. The main protagonist of the novel, a Prague surgeon and intellectual.

Sabina. One of Tomas's mistress' and his favorite. She is his closest friend and a talented painter.

Franz. Sabina's Lover, a professor who falls in Love with Sabina but is ultimately abandoned by her.

Buy 'The Unbearable Lightness of Being'. 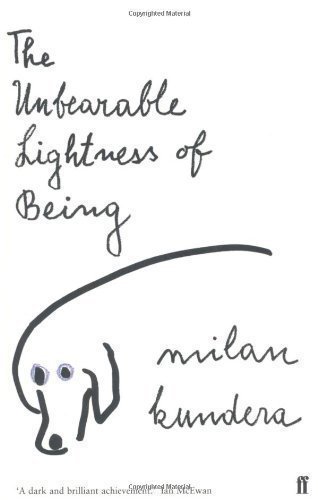 The Unbearable Lightness of Being by Kundera, Milan New Edition (2000)
Buy Now

Kundera's Novel is one of Philosophical fiction that embodies many postmodern features. Techniques such as pastiche, fractured timelines and the mixing of various genres and styles are all postmodern features. While the novel is a fictional one, it also uses real political and historical elements for the backdrop,and utilizes philosophical thoughts and theories. Experimentation is another Postmodern technique which Kundera uses in various ways, jumping between characters, points in time, plot lines, and perspectives. We read some stories multiple times but the perspectives of different characters. Tomas and Tereza's death is seen from Sabina's point of view, then through Karenins Death.

Meta fiction is incorporated into to story, which is quite simply writing about writing. He does this through the voice of the narrator, who talks about the creation of his characters being "Not born of people". This self referencing his own work, and deconstruction of the distance between author and reader is a hugely postmodern idea. The entire story too is told in a non linear sense. The timeline is fractured, signifying The Postmodern Condition and constant confusion of the Postmodern era. Time is distorted as Kundera jumps from various temporal locations throughout.

Non-linear plots can be hard to follow, and many authors incorporate thematic connections to link the chaos together. Kundera utilizes specific phrases and words which are brought up time and again to link the story. When Tomas first imagines Tereza, its in a 'Bullrush Basket' sent downstream. A few paragraphs later this same phrase is repeated when he says she was sent to the 'Riverbank' the very same way.

The Philosophical theme is also hugely experimental as Kundera questions life and the composition of life, stating that real life is made up similar to that of fictional reality. Kundera's characters are no less real than the fictional elements that make up their lives. This theme i explored quite a bit postmodernism. An example in the form of Drama takes us to Luigi Piranello's '6 Characters in Search of An Author'. The distance between reality and non reality, fiction and fact are aspects of postmodernism that questions our very existence. It may seem absurd that we might suggest fictional characters are no less real than us, however,new technologies have afforded us a glimpse into this thought. Video games are in a sense an investigation into the reality behind fictional characters. With game developers being able to create entire worlds now, and even more impressive is the ability to create entire Universes. No Mans Sky is a game that has done exactly that, with whole universes to explore, but what's more is each planet is unique, with its own genetic make up and creatures, minerals. It is, in essence, artificial life. Film too has this ability, but in a more restricted sense. We can only see what the cameras show us, however for Films like the 'Marvel' ones, entire Galaxies have been created. There is a 'Marvel Universe', which stems from the original Comics, so literature (and comics, manga, etc) are also capable of this universe creation. Philosophy seeks to answer these basic questions, for Kundera, it is how are his characters not real? How do the artificially created worlds in film and game differ to our reality?

Magnus. Son. feels guilty for being a part of a bullying scheme which caused a girl to take her own life.

Eve. Mother. A writer whose having trouble dealing with her husbands infidelity and writing her next book.

Amber. Arrives one day, ends up staying and has enormous effect on the family. 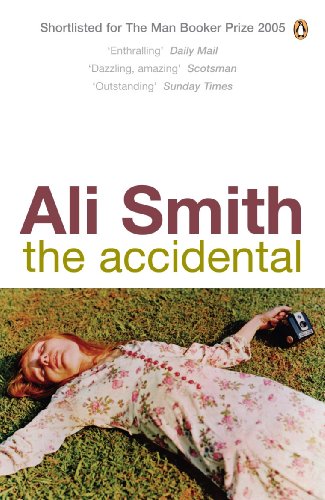 'The Accidental' is a novel that at first glance appears to adhere to Aristotles classic structure of a story; it has a Beginning, a Middle and an End. The book is divided into each, within which is a chapter from the perspective of each character. 'The Beginning' suggests to readers the plot outline, however Smith does not offer this, instead opting for a vague description of each character. It also offers moments of insight into the families separation.

Fragmentation, as with kundera's temporal fractures, encompassed Smiths story also, but so too did it affect the composition. It may appear simplistic in layout, it is anything but though. Smith manipulates the structure of her story in order to escape the wholesome family tradition. She creates a realistic, family unit with various issues, and enhances this portrayal of the broken family unit through her use of fragmentation. The Beginning is broken into four chapters, giving each character a space to express themselves, then there is introduction to Amber, the femme fatale. This chapter is as mysterious as Amber herself, given clues into her background that as readers we find hard to believe, or more accurately, we are unsure of what to believe and what not to believe. Reality and non-reality are intertwined in Amber's chapter.

The Middle is distinguished purely by Amber's existence. Her influence on each family member as each are fascinated with her int heir own way. Each character expresses themselves in various ways, ways that are unique to that personality. Magnus, a maths enthusiast, conveys his thoughts through equations. "Amber = True. Amber = Everything he didn't even know he imagined possible for himself". Michael bursts into prose and poetry to express himself in a chapter with each poem varying in style and technique. His Poetry refers to the postmodern feature of Pastiche, which is a technique of literature, art and theater that imitates the style of one or more sources. It's a collage work stemming from various sources.

'The End' is the most traditionally structured describing the family after Amber's departure. Smith plays around with the meaning behind the chapter titles, examining the various ways of constructing novels. Since each chapter begins mid-sentence (as a way of letting us readers know the characters are still living their lives even when we aren't reading about them) we can re-use the Section Titles (the Beginning, the middle, the end) to fill in the start of every chapter. Joining the titles and the mid-sentence gives some sort of coherence, 'The End'-"...of the World". In this way, endings and beginnings are connected, Since the Novel really begins in the middle of the Smarts Story, readers are confused to the families history, and their situation, only being given hints and suggestions throughout. Its the pure inexplicability of their situation (Amber finding them, changing their lives, disappearing, then the family home being robbed) is another aspect of the Postmodern Condition, not everything in life can be explained, we don't have the answers to everything, and not all answers can be found.

Amber as a character is the epitome of postmodernism. She embodies the 'Fragmentation of self' in her unsettled and chaotic personality. She is vague about every aspect of herself, as I've mentioned previously, giving another glimpse into the postmodern feature of paranoia, the readers don't know what's reality and what's fiction as both are interrelated n Amber's mind.

Esthappen and Rahel. Twins whose perspective the story is told through.

Orangedrink Lemondrink man. A man who sexually abused Estha at a screening of 'The Sound Of Music.

buy 'The God of Small Things'

'The God of Small Things' is a novel based around the hierarchical caste system that still effects India even though it is an outdated law. Arundhati Roy portrayed how this system still had a grip on society through the eyes of two twins Rahel and Esthappen. Although the story is from their perspective, what they know comes from the family and what they tell them, so as readers we get a fuller understanding of the setting, both socially and culturally. The temporal setting shifts between when the twins were 7 years old and when they are reunited at 31. Roy utilizes various aspects of Postmodernity in her novel, possibly as a contrast to the outdated laws. Even with a Postmodern perspective, we are still socially gripped by redundant, prejudice laws.

The temporal fracturing in Roy's novel has various uses. Firstly, it creates tension and suspense. We are told at the very beginning of the story that the plot will be based around the death of Sophie Mol, a cousin to the twins, who dies when they were both 7. However, Roy then jumps forward 2 decades, and back again on numerous occasions, so as readers we don't fully understand the events until the final chapter. Secondly, this time jumping also keeps the readers in the same understanding of the events as the Twins have. At the beginning of the novel we know very little, like Estha and Rahel, and its only at the end, when the twins are 31 and are old enough to fully recognize what happened when Sophie Mol died, that we too fully understand.

Roy also switches from both twins perspectives, to allow readers to see the world through both their eyes and with their individual understanding. Throughout the novel, we understand their world the way they do, and in order to make that happen, Roy uses thematic connections (as with Kundera) to highlight this. Many phrases and words reused, such as the 'Dorsel Tufts' of a moth, 'Viable, Die-able Age', 'Loved a little less', and the 'Orangedrink Lemondrink Man'. Each has its own story, its own beginning, but they emanate through the entire novel. Roy employs nonstandard capitalization (wherever she is describing something the children find important), punctuation and spelling and even invents new expressions.

Irony is used in many ways, mainly though, through the character of Pappachi. The biggest failure of his life was not having a rare moth he discovered named after him, the irony being that such a small creature caused such massive tragedy. Of course the stories biggest irony is the death of Sophie Mol, which sets the scene for the novel. The family spend days preparing, buying new clothes, teaching the twins how to behave, what to say and what not to say, all because they are afraid of what they will think of them. Then Sophie Mol arrives and her death tears the family apart, the ripples of which traumatize Estha into never speaking, separates the twins, abandons Ammu and basically ends up as the biggest tragedy the family had ever witnessed.