Do we choose the books to read, or do they choose us?

This question kept coming to the forefront of my mind as I was reading this novel. As I thought about it, I had recently read two other books that were depressing in nature, so I think it’s a valid question to ask.

Originally, I had read this when it first came out and I don’t think I understood the impact it had. I may have seen the movie also but can’t remember. If I had, I probably pushed it back into the nether regions of my brain only to surface now.

Ordinary People follows the story of an affluent family coming to grips after the tragic death of Buck Jarrett in a boating accident and the attempted suicide of his younger brother, Conrad.

After spending nearly a year in the hospital, Conrad is now home and trying to adjust to life once more. He tries as best as he can, under the watchful eye of his father Cal and aloof mother Beth.

Knowing that his adjustment isn’t easy, Conrad seeks additional therapy with Berger, a compassionate psychiatrist who wants Conrad to admit to himself that the accident was not his fault. Conrad is living with the guilt of the acciden, yet is afraid to show his true feelings for fear of alienating himself from those around him.

Cal on the other hand tries as best as he can to put Conrad at ease but doesn’t know what to do when he’s always given the brush off by Beth. She won’t admit to actually being the problem to Conrad’s mental health.

I don’t think the main character here is Conrad, but the main character should be Beth as she‘s the one searching for help but won’t admit it. It’s hard to say if she’s always been cold to Conrad while putting Buck up on a high pedestal and subconsciously blaming him for the accident.

Beth strives to be perfect and I’m not sure if Guest intended it or not, but whenever Beth is mentioned the atmosphere is always gloomy and chilly when she and Conrad share scenes together. Even if he’s mentioned by other characters the mood becomes cold and dark.

When she and Cal visit her brother in Texas, the weather is warm and sunny and she is a different person. It’s also evident when she and Cal are having a conversation without the mention of Conrad. If his name is mentioned, she doesn’t call him by name.

At times it is a hard book to follow since you’re not sure who’s thoughts you’ve been reading but it is well written and a somber reminder that life can change in an instant.

It is depressing and for the time deals with dysfunction within the family and outside relationships.

Now it’s time to watch the movie and hopefully put two and two together for the parts that I skimmed over. 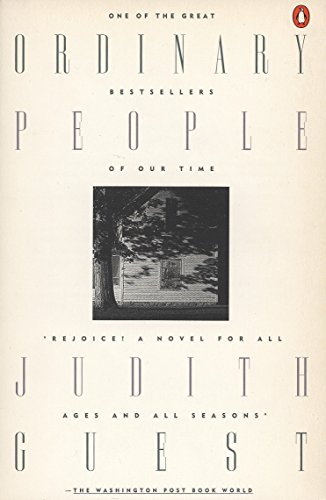