Number Five in the Series

Killer Pancake is the fifth book in the Goldilocks' Catering murder mystery series.

Goldy Schultz is the owner of Goldilocks' Catering, in the fictional town of Aspen Meadows, Colorado. Her husband, Tom Schultz, is a police officer. They have only been married for a few years. Goldy's first husband, John Richard Korman, was and still is, abusive towards her and their son.

Marla, Goldy's best friend, was also once married to John Richard. I don't know how Goldy and Marla met, or how they became great friends. I hope I'll find out in one of the earlier books.

Goldy has one son, Arch, from her marriage to the abusive guy. Arch is thirteen.

Goldy's catering assistant, Julian, lives with Goldy, Tom and Arch. I don't know how Julian came to live with the Schultz family. Another history I'll have to catch up on.

Unfortunately, I have some problems with this particular book, see below. But, I do want to give the series another chance. I like Goldy, Julian, Frances and Marla. The discussions and descriptions of food and food preparations were fun --- and there are plenty of them.

The Goldilocks' Catering series has apparently been published by three separate companies, at different times. 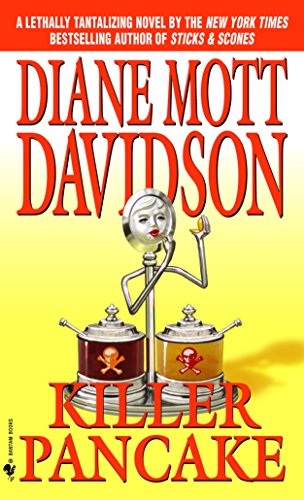 Killer Pancake (Goldy Culinary Mysteries, Book 5)
Goldy doesn't especially like eating low-cal food herself, but a fancy cosmetics company insists upon all diet food at its banquet to introduce its fall line. Goldy can't afford to pass up the chance to cater it.
Buy Now

There is a reason why weight-loss cookbooks have you serve everything dripping with hot mustard, streaked with Tabasco sauce, or speckled with chopped peppers or red pepper flakes. They want to convince you you're actually eating something. Forget your appetite, see if this doesn't make fire come out of your ears!

. . . correctly, it turned out. They agreed to Goldy's enormous premium prices for catering their low-fat banquet.

Goldy even agreed to develop a recipe for chocolate torte with no butter. (Yuck!)

Her only demands were: no mashed lentils, no mayonnaise, and no egg substitutes.

Julian has developed a romance with a beautiful Australian sales woman about his age --- nineteen --- at Mignon Cosmetics. They're happy together, but don't know for sure what will happen when her student visa runs out.

They don't need to worry.

I Can Relate --- To Some Things Better than Others

I don't like low-cal, diet foods, either. I don't think they're really very healthy, despite what M.D.'s like Dr. Lyle Gordon say. Dr. Gordon treated Marla for a heart attack.

I like that about Goldy, and I love her descriptions of food, and of how she and Julian cook things and set them up for the guests.

I did not think that John Richard Korman --- the first husband --- was realistic. I don't see how any M.D. could act like that. I think Dr. Korman is thinly drawn, and shallow. He seems more like a person with a psych disability. Anybody who really acts like that needs help.

That ruined the book for me. I felt it was just a cheap trick to get me to hate him. But, if the author wants me to believe he's a stereotypical villain, then what does the author want me to feel about Goldy's letting him have unsupervised contact with Arch.

Life Is Worth Living --- Even If You're Not Middle Class

A family of poor folks moved in at a Habitat for Humanity home near Goldy's house. There was grandpa John Routt, and his daughter, a single mom, and her two kids, a baby and teenage Dusty, who works in the department store selling Mignon Cosmetics.

I dislike the frequent allusions to the "fact" that the Routt baby was unfortunate to be born to a single mom whose dad abandoned them. It's patronizing, and demeaning.

I am a single mom myself. My kids are all adults now.

I wish I had a buck for every time someone said, "It's cruel to bring a child into the world. Don't you use birth control? Don't you know abortion is legal?" The only place where a single mom will never hear that is from fellow Catholics in the Roman Catholic Church.

I really wanted to like this book, and tried hard. As I say, there are many things I do like about it. I wouldn't give a murder mystery book a low rating just because of some little credibility flaws. That's the whole point of a murder mystery --- especially a cozy.

It's supposed to be escapist. (I guess I have to add that I'm never sure if these authors consider their murder mysteries to be cozies anymore.)

There is really way too much violence in this book, as well.

First, there's John Richard Korman, Goldy's ex-husband. He terrorizes Goldy, right in her own home. Why is he even in her home at all. It was distracting me. I found it so disturbing, I couldn't concentrate on the storyline.

There's even a scene where a character has a deadly weapon in front of Arch. She doesn't point it at Arch, but still --- Arch is right there, and she's pointing it at Arch's dad --- the violent doctor.

The author must have been banking on the reader's desire to see John Richard get a big compeuppance. That's what the scene with the deadly weapon was supposed to provide, I guess. But, it didn't do that for me. It just jolted me out of any suspension of disbelief.

John Richard is not a convincing villain, because he's obviously not in control of himself. A villain has to be in control.

Otherwise, how can you hate him?

The poor guy obviously doesn't even know what he's doing. A good villain would have to have intentionality. But, that doesn't diminish Goldy's responsibility to Arch. She should be protecting him. Instead, she just says that John Richard never has done anything violent toward Arch, or in front of Arch.

I just can't recommend a book with such violence, even though there are many things about it that I do like. I found the characters of Julian and Frances especially likeable. Unfortunately, Frances is the one with the aforementioned deadly weapon.

Grandpa John Routt is a very interesting character, with a sad tale of injury caused by Mignon Cosmetics when he was serving time for driving a getaway car.

I do intend to try some of the other books from this series. I hope they won't have these disturbing scenes and characters. I'm hoping John Richard finally gets the professional help he obviously needs, and Goldy takes her responsibility to Arch a little more seriously.