Only two years my senior and quite an inspiration to me and many others, Rita Dove, is an American contemporary poet and author, born and raised right here in Akron, Ohio. Poets come from anywhere and everywhere, and Rita Dove has represented Akron as a poet extraordinaire in this country.

She was born in 1952 to Ray Dove and Elvira Hord. Her father had the distinction of being the first African-American chemist to work in the U.S. tire Industry. He was a research chemist at Goodyear Tire and Rubber Co. For this area, that is really accomplishing something.

Her mother was an honors high school student who passed on her passion for reading to Rita.

She received a Fulbright Scholarship from Eberhard Karls Universitat, Tubingen, Germany in 1974. After her academic career she went on the teach creative writing at Arizona State University, all the while continuing to write poetry and short stories.

In 1987, she received the Pulitzer Prize for Poetry for Thomas and Beulah, a collection of poems based on the lives of her maternal grandparents. This is her most famous work to date and it was published in 1986 by the Carnegie-Mellon University Press. She is the second African-American to receive this prize.

Also, in this year she was named Poet Laureate of the United States. As poet laureate she concentrated on spreading the word about poetry and increasing the publics' awareness of the benefits of literature, long her passion received from her mother.

From 1993-95 she served as Poet Laureate Consultant in Poetry to the Library of Congress and is the first African-American to be appointed and to serve that position.

Today, she lives with her husband, Fred Viebahn, a German born writer and their daughter, Aviva Dove-Viebahn, in Charlottesville, VA. She has been teaching at the University of Virginia since 1989 and holds the chair of Commonwealth Professor of English there. She continues to write poetry today.

Her poetry is quite unusual and unique and her work cannot be categorized or labeled into one area. Some of her poetry is personal, but it cannot be confined to a specific era or school in contemporary literature.

She also writes on wide-ranging topics with precise poetic language and she captures complex emotions that defy categorization.

Along with having received the Pulitzer Prize and Poet Laureate of the U.S., Dove has received numerous literary and academic honors over the years. She has received 24 honorary doctorate degrees, the most recent in 2013 from Emerson University in Boston, and Emory University in Atlanta.

She has collaborated with music composer John Williams and contributed to a live reading at the Lincoln Memorial and accompanied by his music for the White House 1999/2000 New Year's Celebration, which I watched by the way. It was marvelous.

In 2011, she received the National Medal of Arts from President Obama and the same year she edited The Penguin Anthology of 20th Century American Poetry (2011) which sparked a controversy in her choice of selection of poets to include. She was accused by some critics of valuing an inclusive populist agenda over quality in her selection of poems.

She vigorously defended her selections of poems on Bill Moyer's, Moyers & Co. seen on PBS and also to The New York Review of Books.

She included such poets as Wallace Stevens, T.S. Elliott, Robert Hayden, Gwendolyn Brooks, and Anne Sexton among others. I think her choices were good ones for this anthology.

Her contribution to the poetry and the literature of this country has been interesting, beautiful, and wonderful and she has carved out a place in our country's literature for posterity. 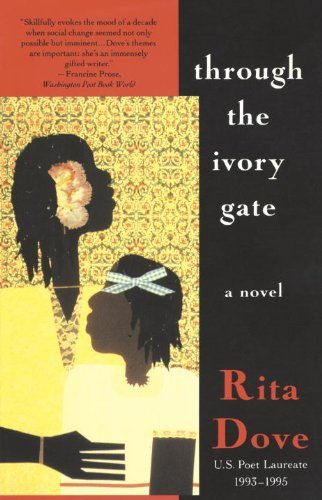 Here are two more of Dove's poems from the University of Illinois website. (http://www.english.illinois.edu) These are from her early writings.

I made it home early, only to get

stalled in the driveway - swaying

at the wheel like a blind pianist caught in a tune

The words were easy, crooned

by a young girl dying to feel alive, to discover

to live by. I turned the air conditioning off,

leaned back to float on a film of sweat,

and listened to her sentiment:

Baby, where did the love go? - a lament

I greedily took in

without a clue who my lover

Just when hope withers, the visa is granted..

The door opens to a street like in the movies,

clean of people, of cats; except it is your street

you are leaving. A visa has been granted,

The windows you have closed behind

you are turning pink doing what they do

every dawn. Here it's gray. The door

to the taxicab waits. This suitcase,

the saddest object in the world.

Well, the world's open. And now through

the windshield the sky begins to blush

as you did when your mother told you

what it took to be a woman in this life.

Have you read Rita Dove's poetry before this?