Setting sail on the new adventure . . .

Leaving La Paz was bitter-sweet . . . heading north toward a sea that I had not ventured onto before was exciting - life had not turned out as I planned, but it had potential . . . from the journal and ship's log of the sailing vessel LOCATION . . . A single-handers memoir of voyages and adventures sailing the coast of Baja, the Sea of Cortez, and the Mexican Riviera . . .

The first night at sea can be somewhat disconcerting for sailors as they regain their bearings and adjust to new reality. The bumps and grinds and swings and sways of being on open water again seemed strange, almost threatening, after the calm of sitting in a protected marina berth. Anchored in Balandra Bay, I tossed and turned through most of the night, stirred by the rattling seas and the boat’s complaints.

The Coromuel winds kicked up about midnight, driving LOCATION asunder on her anchor chain like a hooked fish on the end of a line. I had picked a good anchorage, but the twenty knot gusts still managed to curl around the land, whipping through her shrouds and stirring up a chop that battered and slapped at the hull. I crawled out of bed three times to check that we hadn’t dragged anchor, and we were still in deep and clear water, but my anxiety clung to every swirl of air and sea.

The wind finally subsided just before dawn and I slept for an hour after that, awakening with sunlight streaming through the side ports into my cabin, not well rested but content with the relative quiet. The sun warmed its way through thin clouds. A mild southwest breeze floated across the water outside the bay. I ate a quick breakfast of coffee and fruit, raised the anchor and motored out of Balandra Bay heading north to Espiritu Santo.

The wind picked-up turning around from the northeast as we broke free of the mainland peninsula and out onto the San Lorenzo Channel. Not so good for my intended course, but I decided to make it a day of sailing, which as every sailor knows is not a straight line endeavor. I raised LOCATION’s sails, unfurling the jib but keeping a reef in the main, and fell-off to a westerly heading enjoying the brisk salt air and the feel of the boat as she heeled and cut through the water, like a hawk gliding through thermal currents.

Clouds streamed up from the south, and the breeze increased steadily, harder and colder as the day progressed. I was happy I had put a reef in the main as we tacked and headed toward Raza Bay on the island. There were already a number of boats packed in close to each other, occupying the protected water in the bay—not enough room for us, especially if the Coromuels blow again tonight.

I tacked again and headed up the coast of the island. In an hour Mezteno Cove was in sight, empty and tranquil—a quiet little jewel of water that I am always surprised no one else seems to notice. I sailed into the shelter of the north point of land, aimed the boat into the flagging breeze, furled the jib, doused the main, and then dropped the anchor in fifteen feet of turquoise-green sea. The sky had turned a soft gray, thin clouds shrouding the blue. The wind drove the temperature lower. I decided to postpone my first ocean swim of the year yet another day.

April Fools’ Day . . . It was bright and blue this morning. A fifteen knot breeze came up with the sun and pushed two foot swells and a sturdy wind-chop straight off the sea into Mezteno Cove. LOCATION danced with each incoming wave, more blithely than the day before I thought, or perhaps I was just becoming more accustomed.

I slept well last night, tired from unrest the night before. When I finally stirred and climbed the hatchway steps to peak outside, the boat’s stern was swinging much closer to the jagged rock shore than I wanted. I ducked below and turned on the instruments, which immediately set off the depth alarm. LOCATION’s seven and a half foot draft was rising and falling in a mere ten feet of water, far too close to the bottom and the rocks.

I had a curt discussion with myself about anchoring too close to shore, and then hurriedly started the engine. There was no time to dally or rant at myself . . . raising the anchor and moving the boat was not going to be simple, single-handed. The incoming wind and waves were relentless and growing. White foamy wave crests broke on the bow, wanting to bash us against the rocks. There was a strict sequence that had to be followed if I was to get us out of this mess.

I had put out a hundred feet of chain and the bow pointed faithfully at the anchor as the wind pushed us back. I set the autopilot for that heading and engaged the engine, increasing the power until I felt the boat start to stagger forward . . . there was no time to waste then. I ran forward to the anchor locker in the bow and started the windlass hauling up the anchor chain as we pushed forward. The boat hung up for a second as the heavy iron hook pulled free from the seabed, and then I watched it come up quickly through the clear water, and roll up on the bow pulpit . . . piece of cake. I scurried back to the helm and took over the controls.

My original thought had been to just move the boat forty or fifty feet further out and re-anchor, but with the southwest winds arguing their point, I decided to keep going on my next planned leg to the north. Inside the cove, with the rock shore so close, the wind had seemed threatening, outside, the air expanded and softened. I raised the sails to their full as we cleared the cove, and set a broad-beam reach course toward the San Jose Channel and Isla San Francisco. I’ve always thought it was kind of fun-interesting that in San Francisco Bay, San Jose is south of San Francisco, but on the Sea of Cortez their positions are reversed . . . just saying. 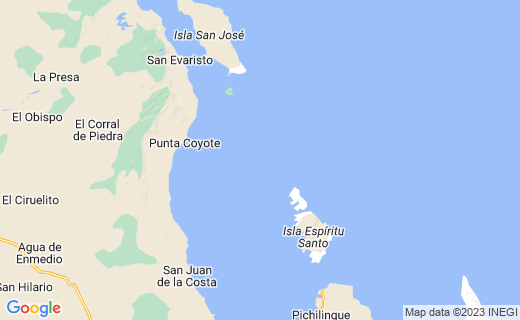 The breeze settled in comfortably, west-southwest, at twelve knots. LOCATION’s white wings filled, pulling us forward through navy-blue seas with wisps of spume scattered across the surface like curls of frosting on a cake. To our west, port side, the Baja peninsula climbed out of the blue sea, shades of gray, rusty orange, red bands of sloping stratified rock forming giant bluffs and ridges sprinkled with bursts of chartreuse cactus and other vegetation recently revived by early spring rains. Seagulls, terns, and pelicans circled, gliding through a crystal blue sky as the boat and I seemed to break free of gravity.

I am starting to think of LOCATION as more of a companion than craft. Single-handed, I depend as much on her — the sounds and feel of her sails and keel, rigging, rudder, engine, instruments, the rush of water on her hull, the pull of the wheel in my hands, her personality, her strength — as she must in me. Today, all of the elements came together, and I could almost feel us melding together, talking to each other, relishing in life.

An hour away from Espiritu Santo, the obscure gray smudge of Isla San Jose, with the smaller silhouette of Isla San Francisco etched into its background, started to rise on the horizon. Three hours later we approached the anchorage in the smaller island. Six other boats were anchored inside already, and taking a pounding from the southwest winds. The little half-moon anchorage there, known as The Hook, was blown. I veered off and headed across the San Jose Channel for the little village and bay at San Evaristo on the Baja mainland where we would have better protection from the current weather I hoped.

One of the boats from The Hook obviously had the same goal in mind and I watched them sail out of the bay and mimic my course. They had a small lead on us, but we caught them about halfway across the wide in an impromptu and as unserious a race as possible given a normal tendency for any two boats sharing a destination to compete. As LOCATION crossed just behind them on an opposite tack I recognized the boat WALK ABOUT, from Seattle. They had come down to Mexico in 2006 on the same Baja Ha-Ha as us. On the next tack LOCATION was ahead and we passed in front of them. The wind had decreased as we sailed into the shadow of the mainland mountains, and LOCATION was pointing high, running at about four knots. As we passed by, just thirty feet or so off the bow of the other boat, the woman on board called out, “do you have any Gray Poupon?”

“But of course,” I responded.

“See you in the bay then.” We waved and had a good laugh, and both arrived about the same time. Later that afternoon, Stu and Anne, from WALK ABOUT, came by on their dinghy and we had a short chat before they went into shore. They are doing the commuter cruiser routine; spending six months of the year sailing, typically November through April, and the rest of the year back in the States. They spent the past six months sailing along the mainland Gold Coast of Mexico (aka the Mexican Riviera) from Mazatlán to Acapulco, and then back across to Baja. Now they are headed to San Carlos, tucked up into the north end of the Gulf of California, to leave their boat there for the summer hurricane season. That is a common strategy for cruisers here, but not a total guarantee of safety from potential hurricanes — I vacationed once in San Carlos, in 1984 a month after a hurricane hit there, and the marina and Club Med in nearby Guaymas, were fairly well decimated by that storm.

So far, April Fools’ Day has proven to be perfectly benign . . .