I saw her look out across the dale, arms over her eyes to shield against a strong sun that picked out the detail well into the distance

I'd passed the last bluff along the mountain path and looked around before seeing her. There seemed to be no-one with this woman who looked so much at home here, gazing out across the deep dale and distant mountains that spread out further into the distance even as I looked.

She was plainly unaware of my being there, rapt, taken by the majestic mountains that rose on either end of the dale above and behind Derwentwater. Birdsong was all there was to hear, a few winged insects buzzed unheeded past her head and it would have been tantamount to a crime to draw her eyes my way by making any kind of sound. Even coughing could have ruined the idyll, so I pulled my water bottle out of the backpack and took a long draught before shoving it quietly back.

Letting my backpack slide soundlessly to the stony path I put hands to brow and took in the view south-eastward as she did. It was worth the energetic climb from the dale I had left a short time earlier, passing first between outlying farm buildings along a well-marked track and climbing steadily upward past the trees, past a long abandoned limestone quarry. A short fumble with a zip resulted in finding the apple my landlady had left in the fruit bowl. The strong breeze that whipped up from the west took the noise of my chewing away and I just stood with my apple, watching her from the corner of my eye - still oblivious of me.

A brunette, the woman was a lot younger than me. Her hair was lifted by the breeze and swept across the back of her head to glow in the bright Lakeland sunlight. Seeing her made me wish I were still single. Surely there was someone with her? Although there was no real risk of being alone up here - no more than for me - the possibility was always there of an ankle injury. The mountain rescue teams would take some time to locate anyone up here, and the risk of hypothermia is always there with the quick changes of weather in these parts. She looked able to handle herself on these rocky paths, however, no fragile city-dweller.

After what seemed an age I decided it was time to move on. Something stirred behind me and a middle-aged fellow showed from the trees. He grinned at me and commented,

I nodded in mute agreement with the American - or was he Canadian? - as he made his way past me to the woman's side,

'Did you get your pictures Bill?' she asked as he neared her.

'Sure, Bev. Turn back and admire the view, I'll take one of you'.

She obliged and turned away again just as I took the path down into the dale ahead, tossing .the apple core high up into the air, away from the mountain top. I still had several miles ahead of me to get to Seatoller at the southern end of Borrowdale..

And now for something completely different (are you comfortable, sat with a glass of something strong?): I saw this young woman from some way off, ambling rathe

She ambled rather, aimlessly, not seriously walking as if to get somewhere. There was some rough weather in the offing, closing from the Irish Sea to the west. The rough track made it hard to quicken my stride, and there were loose stones afoot.

She seemed oblivious of the dark cloud that skirted the dalesides toward Shap and beyond, and it looked.as though it had already begun to shed rain on its way here. Her backpack looked full and the pale jacket she wore looked too short for wear up here, not covering her back too well. I could not tell what material the dark trousers were made of that she wore. For her sake I hoped they were weatherproof, or that she had at least a foldable one in the pack. Too often rescue teams have to give first aid to adventurous city dwellers who come out unprepared for sudden turns in the weather - usually for the worse.

At least I seemed to gain on her as I made my way along the ridge. The wind was getting up and rain fell across the right side of my face. I pulled up the hood and pulled the velcro strip across my neck to keep the hood from being blown back. Yet she walked on, wind and rain pulling her hair across the back of her jacket collar, not stopping to pull up her own hood.

Luckily the rain was gone again soon and I took the hood down, still trying to catch up but making little headway on the rocky track. What had been a stiff breeze and turned into a westerly wind kept up, still blowing in more cloud, more threat and no settlements within miles in either direction where the track forked. She ambled on westward into the weather. We were the only ones up here and I was beginning to wonder why I was up here.

The mountain dropped steeply away on either side now, no scenery to speak of, no trees to break up the slopes. Anyone just in need of exercise was out of place here, and only the tarns filled with what had once been meltwater from the last Ice Age. A trickle of water, a gill, sprouted a hundred feet or so from the slope below and ran over rocks through a channel scored by centuries of flow.

I was closer now, within hailing, but with the wind still against me she would hardly have heard. It seemed as though I would never catch her. The track dipped and she seemed to lose her footing. I practically flew down after her... And she was gone, nowhere to be seen.

'Aye', the landlord of the inn thought back as he cleaned a glass. 'there was a young lass who lost her life up there before the rescue team could reach her. Pretty thing, dark hair. Her walking jacket was too short to be any use up there. No proper weatherproofs, and she wore plimsoles not walking boots. Gone up on her own, she had, nobody with her. She'd been looking for where her boyfriend had his accident'.

My question, 'Did he die as well?' was answered with a nod and he put the tea towel over his shoulder to pull the pint for me.

'Was there something else, sir?' I would eat later. First I had to down that pint, suddenly overcome by a thirst. I had only ever read ghost stories. M R James was my choice of ghost writers. This was something I would have to get put down while it was fresh in my mind.

The Lake District may mean Wordsworth with his host of golden daffodils, Beatrix Potter with her animal stories and Herdwick Sheep, Alfred Wainwright with his books on walking the Fells, a host of walkers retrace his footsteps immortalised on the television by Julia Bradbury, tea and scones by Lake Windermere (if you can find a table). The region is all things to all men, or women and children. It's a magnet for tourists but there are parts the tourist hordes miss. Find them with the guide above and the Ordnance Survey map (below), and enjoy your time there.

However, be careful. The reason there are mountain rescue teams there is because of the numbers who over-reach themselves, get too adventurous and forget their own limitations. Don't be one of them, and if you take a dog with you keep it on the leash when there are sheep grazing around you.

Be wise, be safe, be considerate.

When Alfred Wainwright retired he was already well known for his books on Lakeland walks. After he'd written the directions and what to look out for, and hand-drawn the routes as well as the views, a local printer ran them off for him. He travelled by bus around the area to persuade local shopkeepers to stock them. By the third book he wouldn't have to 'sell' them any more, they had gained a following. You'll see why for yourself if you collect the series

Alfred Wainwright, author with hundreds of Lakeland Walk guides to his credit

Reaching the Lake District is straightforward. By train on the main line from Euston either Lancaster (for Ulverston or Windermere), or Penrith for the central Lakes around Keswick. By road take the M6 to Penrith from southern areas, and the A66 links Workington with Teesside across country (east-west). The A66 from Penrith westwards will take you to Keswick and then you're at the heart of the region. Consult road maps from there. By air the nearest international airports are Manchester and Glasgow. Car hire is available at either. From Manchester head for the M6, from Glasgow the M74 and then A74(M). 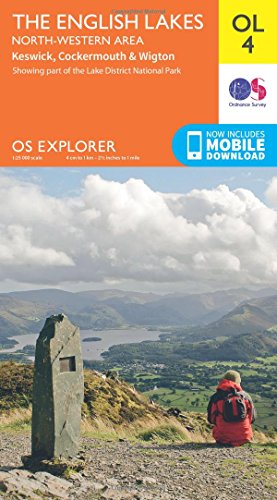 Once you're there you'll need an accurate OS map for walking or driving. Symbols for various landmarks are easy to remember, the contours show you the steepness of your route and your walks will doubtlessly take you across water courses. Don't forget the watering holes, marked as 'Inn' or PH (public house) - and they've all got their own character..