SAILING the SEA of CORTEZ - Chapter 6.1: The Waiting Room

Our next leg north to Puerto Escondido . . .

I always had a reluctance to leave a quiet anchorage, but also a desire to keep moving toward my uncertain future . . . My year of single-handed adventures sailing the coast of Baja, the Sea of Cortez, and the Mexican Riviera aboard my sloop, LOCATION, can only be described as transformative. . .

The cloud cover increased over night, but the winds subsided as a weak weather front moved up from the south to embrace us. Humidity permeated the air as gray light filled the morning sky.

I spotted a can of mandarin oranges in the back of one of the food cabinets and decided to eat those for breakfast this morning along with my coffee and cereal. The can was left over from our original provisioning two and a half years ago. It appeared a bit suspicious when I looked at it closer, somewhat bloated, so I took the precaution of holding it in the sink as I slowly pulled the pop-top tab to open it. And pop it did; giving off quite a little explosion. The fruit inside looked okay, there was no unpleasant smell, so I tasted one somewhat apprehensively, rolling the soft fruit around in my mouth. It was a bit bitter, perhaps slightly fermented, but I was hungry and I ate all of the tangy slices of orange.

Aluminum cans don’t seem to last very long in this environment. I still have some canned provisions that are several years old on board. I imagine after sitting tucked away in the hold through a couple of 120 degree summers the contents have cooked a little. The cans must deteriorate from the combined heat and salt air. I’ve been surprised a couple of times to find a forgotten can of beer or soda ruptured and leaking into a food locker. The result is a sticky, and if left too long, moldy, wretched mess. After breakfast I went through the food cabinets again and uncovered two other likely suspects, and an old can of Coke, which I decided to dispose of. I also moved all of the older food to the front of the cabinets, reminding myself to eat the older goods first. I could just image being in the middle of the ocean someday with nothing to eat but a four year old can of string beans, or worse yet, having to clean up the exploded remains of one of those containers.

A group of kayakers was brought into the cove by two pangas from Agua Verde around noon today. The pangaderos set up camp along the top edge of the beach while ten kayaks paddled north along the shore and past the Gavilans. A couple of hours later two kayakers came by the boat while I was sitting up on deck reading. They had noticed LOCATION’s hailing port, San Francisco, painted on her transom, and we talked about the city where they are from, and my various journeys over the years. They are going to spend the night here, and then head further north on a week-long adventure. It was nice to talk with some people from my old home area, however briefly.

The wind has shifted to an easterly breeze with a southeasterly swell rolling into the cove, and I should probably use this weather to move further north on my journey. Bahia Berrendo is exposed to southerly winds, but it is calm and beautiful today. The cloud cover has burned off and the sun is shining brightly again. If it stays like this I would rather stay here another day and relax. There are some caves in the sea cliffs at the northern end of the cove and I may take the kayak and explore those later. Aqua Verde is just a five mile sail around San Marcial Point, and I can easily pull up anchor and sail around there if the south wind builds too much.

I was going to polish the stainless today, but after a brief start I thought better. There is a great deal of stainless steel on this boat. I did polish the starboard helm wheel, but then realized if I was going to polish it all, it would take several days, and I decided to postpone it. I’m telling you this because I don’t want you to think that my life is all fun and relaxation. There are boat chores to do. And this work is part of the trip, and important to maintain the boat. So I will tell you about the work part along with the fun and adventure parts. When I wax the boat, polish the stainless, oil the teak, change the engine oil, etc., I will tell you all about it. I will probably not tell you about washing the dishes, or cleaning the head, or doing my laundry, because that is a little too mundane I think.

Today, I didn’t polish the stainless steel. But as you can tell, I thought a lot about it, and it does need to be done someday soon.

I woke this morning at seven am after a topsy-turvy night, and took a quick look out of the hatch to see which way the wind was blowing. It was swirling inside the cove mostly from the east, but there were white caps out on the sea that seemed to be rising from the north. The kayakers were moving about also, breaking camp and packing their boats. Bahia Berrendo has been nice, but three nights in one spot seemed like a luxury and so without coffee or breakfast I organized the cockpit, weighed anchor, and headed out of the bay to the open sea.

I figured, at worst, I would motor out and take a look at conditions. If the weather was too bad I would go north to the next cove at Marcial Bay. The batteries needed a charge anyway, and I had a couple of hours of “engine-time-credit” built up after three days on the hook. Out on the open water the wind was kicking up to fifteen knots, and of course out of the north, right on my nose. I decided to bypass Marcial Bay and head up around the point, perhaps to Agua Verde. The wind and seas stiffened against us, gusting to twenty knots with three to four foot waves as we rounded Punta San Marcial. I’ve been in far worse conditions though, and it felt good to be on the water.

I was tempted to cut through the channel between San Marcial Rock and the point and head for Agua Verde, but both my chart plotter and charts said “don’t do it”, or something to that effect. I sailed into Agua Verde ten months ago on my way to Loreto, and watched several boats cut that corner. But I had sailed the outside course, and then hooked back around into the bay. With the north wind picking up more steam, and considering Agua Verde’s northern exposure, I decided this time to head for Montserrate Island, six miles to the north, to see if I could find a quiet anchorage there.

I have to admit I felt like a wimp out there in my forty-seven foot boat when I was passed, in twenty-five knot winds and four foot seas, by two twenty foot pangas, their outboard motors racing with a couple of fishermen onboard heading out for a normal day’s work. They waved and I waved back trying to appear nonchalant.

By the time we reached Montserrate the morning winds had subsided and the seas had flattened. None of the anchorages looked appealing and it was still early in the day, so I raised the sails, turned off the engine and headed toward the Baja peninsula pointing high against the breeze, plodding slowly west-northwest. Several hours later, Isla Danzante and the Candeleros Rocks came into sight, sticking up like jagged teeth on the water as we approached the mainland. The wind turned quirky and light, and finally quit altogether. I was forced to take in the jib, center the main sail, and resort to the engine again. Puerto Escondido lay only twelve miles north. I turned on the water maker and motor-sailed toward the south end of Isla Danzante.

The autopilot took control of LOCATION, and I dropped a bright orange and yellow squid lure off the stern and fed out two hundred feet of line hoping to catch something for dinner, trolling along at six knots. I went below and poured a cold beer over ice with a squeeze of lime, and then came back on deck relishing in the afternoon sun and calm seas. Life was good. 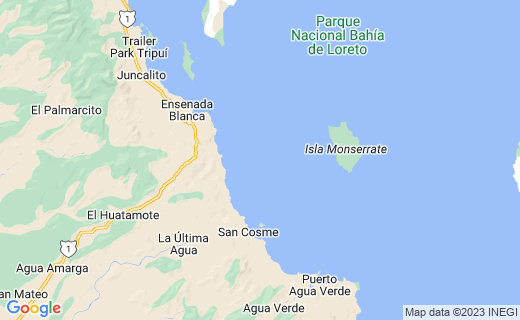 There are two southern approaches to the “hidden port”, Puerto Escondido. One is up along the east side of Isla Danzante, then heading west through the channel between the island and the southern end of Isla Carmen as you round the northern tip of Danzante and turn toward the mouth of the harbor six miles or so from there. That is the safe route according to the charts. A more direct, and significantly shorter, route is WNW through the inside channel along the western shore of Isla Danzante. But, this channel is the home of the Candeleros Rocks, and other lesser, uncharted rocks, and all of my charts are marked with “No Passage” warnings in the channel. I spent some time studying my cruising guide and charts, and finally resolved to take the channel between the two major Candeleros—fingers crossed, watching the depth gauge, and currents. 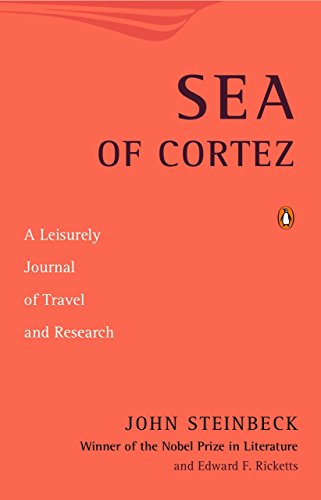 Sea of Cortez: A Leisurely Journal of Travel and Research
Buy Now

Of course, no sooner had I entered this treacherous channel then I also hooked into a rather large fish, which began stripping the line from my reel. Faced with losing both the fish and all of my line, I reduced the engine speed, aimed the auto pilot for the center of the narrow channel, and jumped to the stern of the boat grabbing the rod to wrestle with the fish. It took me nearly fifteen minutes, all of the time looking over my shoulder as we moved toward the rocks, before I finally brought in a rather disappointing ten pound Black Skipjack; not a particularly good eating fish at all—in fact, most cats would not consider it food.

LOCATION was still not through the channel. I gaffed the fish and quickly lifted it into my ice chest to get it out of the way, and then went and took over the helm of the boat. When we finally cleared the rocks I did cut one big fillet out of the fish, just to see the texture of the meat, but ultimately threw it all back into the sea. I spent another twenty minutes or so after that cleaning the blood and guts off the transom, wondering why I had even considered fishing.

At six-thirty pm, with an orange sun falling fast behind the high, rusty mountains in the west, I arrived in the outside harbor at Puerto Escondido, known as the ‘Waiting Room’, and dropped anchor in the middle of a fleet of twenty other boats already at rest.