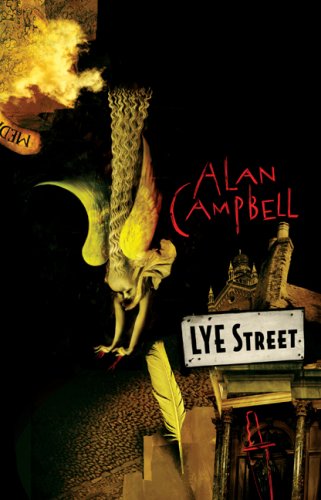 A truly vivid and well illustrated read, Alan Campbell's Scar Night is full of gorgeous and competently fleshed-out imagery, making it the kind of visually staggering read that would lend itself well to film. Set in the city of Deepgate, a massive steampunk-esque metropolis suspended over an equally massive abyss by a network of gigantic chains, Scar Night is the tale of a young man named Dill who isn't a man at all-- he is the last of the angels who serve Ulcis, or so it is said. Only one other angel remains in Deepgate, a sadistic and scar-covered female named "Carnival" that hunts the streets at night, snapping up unsuspecting victims.

Scar Night is extremely well detailed for a fantasy novel-- complete with the intricacies and mythologies of a world that, while alien with it's ideas of evil mazes and an abyss god that is prophesied to be building an army intent on overthrowing the goddess who keeps men from entering the paradise of the sky, contains many elements that make it not so different from our own world, or rather, what our world might be like centuries after some grand catastrophy. Campbell's descriptions tantalize the mind, and the arcane technologies of the ancients, the rooms full of esoteric remnants like the skeletons of angels who died serving Ulcis or the broken glass and maddening voices that haunt an evil priest's maze grab us and make us wonder. Even the depths of the abyss itself with it's pounding hell-forge and rotting minions of Ulcis is crafted well enough to pull in the reader and paint an amazing tapestry of darkness within his mind.

The plot and storyline of Scar Night are pretty well written too, leaving only a little to be desired, but considering the fact that this is Alan Campbell's first book and the first book in his debut series The Deepgate Codex, it's well worth a read. All in all, I give it four solid stars out of five, even though the writing has it's rough spots here and there. It really is that gorgeous. Also, check out the sequel, Iron Angel, if the first book does it for you.