Alex has taught at four public schools, been accepted into three honorary societies, and traveled the Americas and Europe. He has his BS.

"Snuff" is only one of many Discworld novels. However, something about it is strikingly unique. This novel is a story about real-world issues, but disguised in a fantasy setting. That's not to state that the veil is too thick; Sir Terry Pratchett does not beat around the bush.

"The worst thing you can do is nothing."

However, placing such topics in a world of vampires and wizards makes serious subjects entertaining to think about. For this reason, I believe that Sir Terry's Discworld books are especially beneficial to teenagers and to young adults. Don't get me wrong; serious issues are serious issues. But, in order for people to take something serious, they must not be frightened away from it. [One should take note that the Discworld series is, in multiple ways, much like the Harry Potter franchise. I personally feel as though the Discworld books are far superior!] 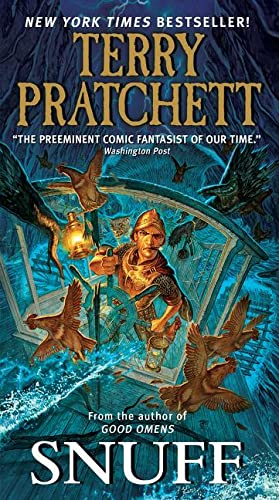 Honestly, I think that my favorite thing about this work is how Terry Pratchett addresses subjects like chattel slavery, oppressed peoples, and how we can make an effort to change people's historical perspectives. "Snuff" is one of Terry Pratchett's finest works, and it is definitely one of his best Discworld books. Try not to be run away from this book, just because it contains some sobering ideas. When one reads "Snuff", that person will realize that it is far from sobering or boring on the whole. The Discworld is somewhere between complete fantasy and our world - it's where the supernatural and the completely natural clash together.

"Snuff" is a novel which follows one of my all-time favorite Discworld characters; Sam Vimes. Vimes is very rugged in many ways. Regardless, Vimes has a very sweet heart. Vimes can't always be nice in a traditional way. He's a policeman who grew up in a very dangerous city on a very dangerous world.

"Do not seek perfection. None exists. All we can do is strive."

That isn't to state that he isn't one of the kindest characters on the Discworld; I certainly think that he is! I cannot give too much away in this review; I want you to thoroughly enjoy this book for yourself. I can inform you that Vimes is a great man, but not a flawless man; a good-hearted man, but not a push-over. Sam Vimes is a person. He's complex and not black or white. There's a lot of grey to Sam's character. I want my heroes to have nuance; I want them to be people. People are relatable, and I enjoy that in a fictional character.

I should also point out something about "Snuff" (and many works by Terry Pratchett); it's funny! Sir Terry has a wonderful sense of humor and those with a healthy funny bone should love Terry Pratchett's writings! Serious topics do come up in the book, but there is a clear sense of the comical and of the fantastical.

"The jurisdiction of a good man extends to the end of the world."

"Snuff" is far from being too serious, even with racism and social inequality being a major point in the novel. I personal feel as though our world's problems can be best brought to awareness through play; that is, that only when we present a light to a dark room can we begin the work of cleaning said room. Terry Pratchett is certainly a genius, because he does this so well!

To be completely frank, even if "Snuff" was the only Discworld book I had ever read (and, it is far from it!), I would still give it five stars. I don't just write that because I miss Sir Terry (and, indeed I do), but I loved his books just as much as when he was walking in a body on our world.

"Not all questions are answered, commander, but fortunately some answers are questioned."

For your convenience, I have provided an interview with the author above. In this interview, there is talk about Sir Terry's book "Snuff". The interviewer seems to also place Samuel Vimes in a position of high regard. I very much suggest that you go to your local library and find the time to read it, because "Snuff" really is a delightful read!

What is your favorite Discworld novel?

5 stars for "Snuff" by Terry Pratchett