So You Want to Be a Professional Footballer?

Deep into extra time at the end of the Cup Final, and with his team still losing by a single goal, the goalkeeper comes up for a corner kick. It is the last chance and suddenly the ball finds it's way to the keepers feet. Without a moments hesitation he volleys it home, half the crowd go wild as the game goes into penalty kicks. One by one the opposition step up, only to see their efforts thwarted by the hero of the moment once more. The cup has been won and it was all thanks to one man!

Unfortunately this story never did come to fruition but is a scenario I played out many times as a kid, playing with a ball in my back garden as I dreamt of one day being a professional footballer.

I am sure that this is a dream shared by thousands of youngsters around the world and for some the dream may come closer than others. However, for most you will find the extent of your footballing prowess reduced to a weekly 5-a-side kick about with work colleagues by the time you are in your 'prime'. Some others may get closer but even getting into an academy of a professional club is no sure sign of future success as the club's try to unearth the next Messi. As an example my wife's cousins son has already turned out for three different academies and he isn't yet 10. You imagine that it would be tough to make it all the way.

However, even today the dream sits somewhere within in me and I have to admit to in the past having watched games featuring European minnows like Andorran and San Marino and thought, if only I was born there, I would have made it to the national team alongside all the butchers, bakers and candlestick makers who turn out. San Marino for example only has a population of about 32,000 and if you take down to those of a football playing age, surely I could get in?

Whilst I have always left my thoughts at that point, one man was looking at the world very differently. Ralf Haley was in a job he hated and was looking for a way out. Reading his story it sounds like he may have had a little more talent than I did but he found himself hating himself for letting his younger self down by not becoming a pro footballer.

However, one day he thought he had found the perfect solution to satisfy his dreams. All he needed to do was get a trial at a club in one of these small countries, get paid for a single match and he could carry on happy. Over the next few weeks at work he compiled a list of over 1,000 email addresses of clubs throughout the world in 'lesser' footballing nations, ready to kick off his plans. Eventually some replies started to come back saying that, "yes", he could attend training and take part in a trial.

His friends thought he was crazy but Haley was adamant he was going to try so started making plans for the trip, including most importantly, starting up a fitness regime and starting to actually play football again. Even the fact that he picked up an injury straight away didn't deter him at all and after a while he was handing in his notice, ready to set off with £1500 in his pocket. One thing that did go in his favour was that his older brother made the decision to accompany him on the trip. The brother, Tristan, worked in the film industry and saw the crazy idea being perfect for a documentary so they headed off with cameras in tow. First stop Malta...

The clubs that Ralf Haley had trials at during his trip, highlighting the level he was hoping to succeed at

I won't go in to detail about the trip as I that could well ruin the enjoyment of the read but Ralf and Tristan found themselves undertaking a trip like no other. In many parts like the backpacking trips across Europe undertaken by thousands each year, except for the occasional training session where he was hoping to show enough ability that the club would willingly pay him, even just one euro, to play for them.

I did at times find myself wanting to shout at the book for the lack of organisation shown by Ralf and his brother as, for example, they turn up at one club that cannot sign foreigners or the fact that older brother Tristan had never heard of Andorra before the trip. However, this actually just adds to the "plucky underdog" feel of the book and by the end you are really hoping that Ralf will get to live his dream.

The trip itself actually occured in 2009 and it is only now in 2015 that the book has been completed and published and they hope to release a film of their travels later this year (which I am keeping a close eye out for), but in the meantime there are a couple of trailers on youtube such as the one below, that give you both a feel for the adventure and also (unfortunately!), Ralf's lack of talent as a footballer!

I thoroughly enjoyed this book from start to end. I think in my personal case it covered two dreams of mine that I didn't accomplish when I was younger. One was the obvious, to become a professional footballer but the other was to back pack across Europe, ending up in random towns and cities. I have traveled a reasonable amount across the continent and work in the travel industry yet there were still locations that I had never heard of this and this really added to the story. I also like the fact that having researched Ralf Haley post reading the book, I can see that he has ended up still being heavily involved in football, in a job he appears to love (based on his own website www.ralfhaley.com) as he now creates the montages that are seen before/during/after televised football matches.

If you have ever dreamed of being a professional sportsmen then I would suggest you download/buy this book immediately and live out your dream through Ralf. It might even make you respect the minnows of world football next time you watch them play as well!

And One Man Who Did Make It 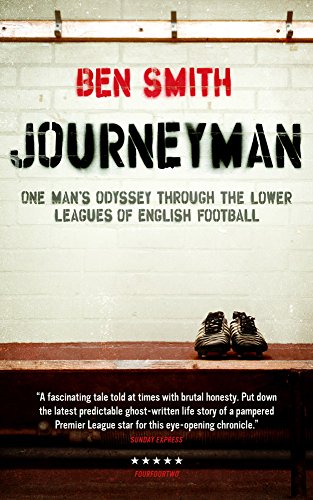 Journeyman
Names such as David Platt, Dennis Bergkamp and David Seaman will be well known to many football fans and especially to those of Arsenal. However, maybe less well known is another player who started pre-season training with these players at the start of the 1995/96 season: Ben Smith. Unlike Ralf Haley, Smith was born with a natural talent and had been scouted by one of the biggest clubs in the country. It looked like he had it all set up. However, football is a tough game to break in to and even being a top youngster doesn't guarantee long term success. For every success story, there are hundred's of Ben Smiths. Within a year he had moved on to Reading and thus started a journey down the leagues until he made a career playing for teams such as Yeovil, Southend, Hereford, Shrewsbury, Weymouth and Crawley Town. It is a quite interesting review of a career that sometimes you feel was slightly 'wasted' as there were several points where I felt that he could have made much better decisions and made more of his career. It is interesting though to see the relatively 'small' amounts that he was earning as you always think of professional footballers as multi-millionaires. The book is also interlaced with updates from his fledgling teaching career that he has found himself in as his football career comes to an end. I sometimes watch my local non-league club and do occasionally see players who once turned out for big clubs but never quite made it and I really enjoyed reading this book and would recommend to others because, whilst even as an Arsenal fan, I had never heard of Ben Smith, I could place others I have seen in his story and picture what they go through to make their career. It also makes me feel that whilst he made it, I think part of me actually prefers to be in Ralf Haley's camp of harbouring the dream rather than living the difficult lower league journeyman reality.
Buy Now

Links To These Books On Amazon UK