Sooner or Later by Debbie Macomber

1. Debbie Macomber is an award-winning author of 100+ romance genre novels.

2. She resides with her husband in Port Orchard, Washington; during the winter season they are in Florida.

3. She is a #1 New York Times and USA Today bestselling author; 170 million plus book copies of hers are in print worldwide.

4. Debbie Macomber loves being a grandmother.

5. Best website to visit to learn more about Debbie Macomber plus what she is currently doing: http://www.debbiemacomber.com/

Sooner or Later was my introduction to the books authored by Debbie Macomber. I had not read any of her works before. I had seen others in the laundromat read them. My mother called them "charming and a fun read" which is how I obtained Sooner or Later. I had no idea what the book was about when I began reading the novel or what subject material I should prepare myself for, but knowing it was a Harper Paperback (they are known for racy novels), I braced myself as the words flowed from its pages.

Sooner or Later surprised me. It was good. The plot stayed on track without deviation. The novel had interesting subplots and relatable characters. I could see how a prim and proper postal worker could end up in the type of situation the main character, Letty Madden, did in order to do all she could to rescue her twin brother, Luke, from being arrested and placed in jail by the winning side in a Central American revolution that led to a dictatorship. It made sense. Letty Madden is a very believable character who acted as one would expect. All the characters had these redeeming qualities which made it an excellent reading material. This is one lady author who knows how to create realistic characters and scenarios that are interesting.

Sooner or Later is not just a romance novel. It reads more like an action-adventure movie with mercenaries, military installations getting blown up, children being rescued, people helping people, revolutionaries running amok, and so forth. My husband loved it because it had some real manly man stuff in it. Definitely is a well-written action packed book for men and women.

Sooner or Later does have some "steamy sexy" parts that are very adult and has very adult subject material throughout its pages; would not recommend for under 18 years of age (my opinion). This is one book, I would not leave lying around if children are still living at home. Sooner or Later reminded me of Sylvester Stallone, Bruce Willis and Jason Statham movies rolled into one book. This was a real treat. Recommend as fun recreational reading material!

5 stars for Sooner or Later authored by Debbie Macomber 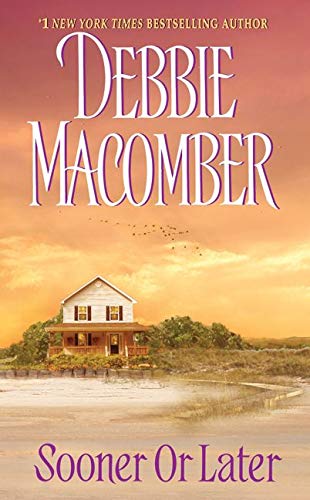