Starbridge: A Rousing Story and a Lesson on How to Not Conduct First Contact

StarBridge's cover positively screams "the 80s." I'm not sure how one can immediately see such a thing, how different aesthetic styles by decades are so clearly visible to us, so that the close fitting leotard and long mane of hair, disembodied heads floating in the sky, spread of stars and asteroids, jumps out at us and screams "this is from 40 years ago," Science fiction can both be a genre which is just as timeless as any other, and one which ages quickly - as the technological predictions made for the future are revealed to be baseless and infeasible. StarBridge doesn't have to worry about this because it is a very soft form of science fiction, one much less troubled by scientific accuracy and much more interested in telling a good and moving story. It succeeds in this, but at the cost of requiring some suspension of disbelief.

Of course, this is all getting ahead of ourselves - what is StarBridge? If you haven't read the book, then there are more than few spoilers present in this recounting, so be aware. A freighter is travelling between a colony world of Earth and Earth itself, when it detects the transmissions of what seems to be an artificial race. It is up to this freighter, its crew convinced above all else by the passionate lobbying of the captain's daughter, Mahree, to try to make first contact with an alien race. Along the way, the problems of cultural shock and contact with aliens, and contact and understanding with humans too - particularly the doctor onboard, Rob - are the pivotal features which the book turns around, as the humans struggle to try to understand these alien strangers, and these alien strangers struggle to understand their new human guests, while both sides face the insidious and creeping threat of internal terror and factionalism...

The central theme of StarBridge is First Contact, which is to some extent unfortunate since this is the part where the book contains the most flaws, errors, or reasoning problems. For one, it is hard to actually see why the freighter is the first to find the Simiu - the race of aliens which they find. The freighter is returning to earth and picks up transmissions - but why were these transmissions not received by a planet? As it mentions in the book, the Simiu world lies directly on their return trajectory back to Earth, which enables them to visit it when their fuel supplies were quite limited otherwise. Now, the question is - why is the Earth's colony so incredibly far away from home that there is an entire alien civilization between them and it? And why weren't these transmissions picked up by Earth first? Exploration in the book as a whole seems to be patently non-existant, as can be seen by there being un-surveyed worlds between the Simiuan homeworld and the council space station, despite the sheer amount of exploratory resources present for a space faring civilization.

Once we arrive at the home system of the Simiu, the freighter is curiously blind and its sensors are painfully bad. Now, of course, it is a freighter - but it has trouble picking up even the most basic planetary information, or detecting ships, when stealth in space is essentially impossible. The humans have to get extremely close to the Simiu homeworld to be able to get any decent readings or information - which would be allowable in most science fiction scenarios, given the overwhelming military force surrounding the human ship, with multiple cruisers watching over it. But it is later revealed in the book that every FTL-equipped ship, if it activates its FTL drive inside a star's gravitational well, can destroy an entire star system. Beyond the incredible danger that this presents just in normal service and which leads me to doubt that any scenario such as a poor tramp freighter being allowed to exist without exhaustive security protocols onboard - since after all, it could hold Earth ransom for whatever it wanted, or if taken over by terrorists could destroy humanity's homework without any defense - this raises the question of how the Simiuans could possibly allow a vessel equipped with an FTL drive into their home system. This is gibly explained away by the idea that the Simiuans, not being a war-like - in the sense of not conducting large scale wars - could never even imagine the possibility, given their strict rules of honor. But the Simiuans have contact with no fewer than 10 other civilizations, and most assuredly somebody would have thought up the idea of using the FTL drive in such a way - and with years of cooperation and planning for how a first contact situation would take place, it seems patently absurd that this would never be thought over by the Simiuans.

There are other things which are questionable. The Simiuans have had many decades at the least to prepare for a first contact scenario. They know extremely well that other cultures and civilizations do not share their proclivity for using duels for resolving scenarios where their honor is affronted - and yet they immediately jump to this in their meeting with the humans, despite a long time of what must have been very vigorous preparation and training for a first contact scenario, as they are aware of the possibility of meeting aliens and have every incentive to have a good plan of how to do it, since they stand to gain increased representation in the interstellar council which they are a member of. Not only do they fail to make any allowances for another culture despite having to deal with this quite often when dealing with other species - and there seems to be a very substantial interchange between the Simiuans and the other species of the galaxy, as testified by the very extensive amounts of foreign currency circulating around in their economy - but they also are the ones who lead to a breakdown in communication with the humans through the rash actions of one of their representatives, who starts a fight with a human in a chess game match.

This doesn't make sense, since while the humans have absolutely no training nor selection for a first contact scenario, the Simiuans certainly do, and they can select their people - and including anybody with a temper or someone prone to violence in their contact group seems absurd. The only possible explanation is that this was a purposeful act of sabotage from groups in the Simiuan government opposed to contact with the humans - which it is revealed, do exist to some extent, since some Simiuans think that their membership in the galactic community is leading to a decline in their moral strength and them being weakened by financial incentives. But this group is also portrayed as a definite minority, and only gaining any influence whatsoever when the diplomatic incident with the humans broke out - so therefor it seems very unlikely indeed that the Simiuans' planning could have been so incompetent.

Furthermore, the First Contact is surprisingly... humancentric. The humans observe that Simiuans learn from the humans expressions such as nodding their heads, as if the influence of the humans is rubbing off on them - but what about what the humans pick up from the Simiuans? There is nothing of this vital aspect, so the book presents a portrayal of First Contact which despite the author's best attempts cannot manage to rescue itself from its dominant human perspective.

First Contact in StarBridge is very clearly not internally consistent nor logical. It doesn't represent a realistic portrayal of what First Contact would be like from a civilization which has a vested interest in a successful first contact, and it doesn't make logical sense, and alien psychology cannot be mustered as a good enough reason for why things happened the way they did. It is an exciting portrayal of meeting between man and alien, but ultimately a terribly flawed one.

That asides, StarBridge is a great story and a fun read. It isn't a momentous book, not one which makes you reevaluate life or ask major questions, but it is filled with drama, with adventure, with love, with discovery, with plot twists - perhaps a bit convenient, but good twists that make sense - ones that cause emotions to swell up, with the joy of survival when death seems all but certain, with the triumph of success when defeat beckons. The characters too, are ones who I like as a whole - Crispin did a good job with Mahree, crafting a young woman unsure of herself, one who isn't all powerful and who genuinely has to struggle for what she is trying for. Today it seems that in many movies female characters win effortlessly and even more importantly both have no flaws and possess boundless self-confidence in themselves: Mahree might be too mature and do too well for her young age of 17 (which also makes the idea of her romantic relationship with the doctor, Rob, at 24 years old, a bit of an odd choice on the author's part...) but she does have to work and work hard for what she is trying for.

There is also a tremendous amount of imagination that goes into the aliens, so that although the Simiu might seem rather close to Earthlings when all is said and done - fundamentally, despite their honor cult, they seem to think quite similarly - the other aliens have dramatically different physical, and from what we could tell to some extent mental, characteristics. Alien psychology is naturally an incredibly difficult subject to do since well, it is so alien - but Crispin offers a fascinating panorama of species and demonstrates that she can be accused of many things with the book, but not lack of originality for her aliens. Her humans too have a pleasant diversity and charm about them, with Mahree's French heritage and occasional French interjections being particularly common (and avoiding what I consider to be the problem of the excessively smooth communication with aliens, where even if translating words is easy, concepts, ideas, culture, should be much harder to deal with than in the book).

It is a good book, a nice and fast science fiction read, one which is excellent for young adults as long as they're comfortable with a few sex scenes (translation: as long as their parents are comfortable with them reading that, but our society is utterly overwhelmed with far worse content today so I suppose such a disclaimer is moot). And particularly it sets up a superb base for future stories in a series - and it gives one the excitement to go out and read them. A good book for any science fiction lover, showing science fiction beyond just war, where it is the drama of peace which rears its head. 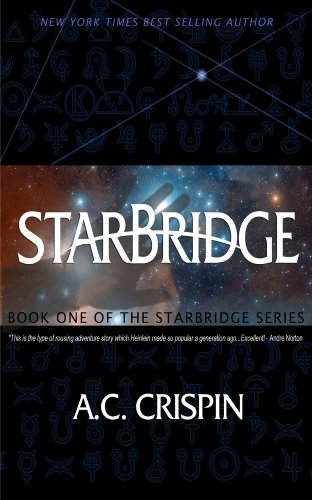