SteamPunk: The Marriage of Science Fiction and Fantasy

What the heck is SteamPunk? If you’re unfamiliar with the sub-genre, start by thinking back to the age of steam trains and boats. Picture giant metallic gears that turn slowly to move the hands on a clock. Then think of fictional inventions that existed in print long before their time; Jules Verne’s Nautilus or H. G. Well’s Time Machine. Now picture a world where you are surrounded by all of this; clockwork inventions replacing the modern technology we know and use today. Now you’re starting to get an idea what SteamPunk is. 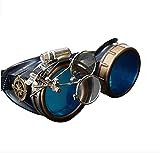 According to Wikipedia (the infallible source for all information) SteamPunk was popular as far back as the 1980s, however I didn’t find out about it until the last few years where it has experienced a sort of resurgence with the help of books, art and Facebook games. Yet, even though I didn’t learn the name until recently, I was unknowingly familiar with the genre. Movies like Wild Wild West, which came out in 1999, was SteamPunk and I didn’t even realize it. So the genre has been there for some time, it just took me forever to focus in on it.

Now, I’m a big fan of the Science Fiction and Fantasy genres and it seems like SteamPunk has fallen into place within my mind like a Lego that was always meant to be there. I enjoy the imagination and ingenuity of SteamPunk and the sense of an alternate Victorian history creates a mood that is easy to get into, yet hard to leave. I began to wonder where this genre came from and why I liked it so much; even though I had very little experience with it. Again, according to Wikipedia, the term was coined by Science Fiction author, K. W. Jeter as a play on words from the cyberpunk genre. It was intended to encompass not only his works but works of other competing authors at the time, all of them influenced by the works of Jules Verne, H. G. Wells and Mary Shelly, to name a few. Its history is actually quite interesting and I encourage anyone to read about it (even if Wikipedia is making things up.)

As a writer of fantasy, I haven’t given a huge amount of thought to the sub-genres. Technically, everything I’ve read is in some sort of sub-genre, but rarely does it enter my mind that that’s what I’m reading. When I think of fantasy, I generally think of “high-fantasy” or “sword and sorcery” fantasy, which is usually the magic in a medieval setting (I try not to include elves in my own writing). Even though these are most commonly associated with the general term ‘fantasy’ they’re both sub-genres, in much the same way that cyberpunk is a sub-genre of Science Fiction.  It is my opinion that, the sub-genre SteamPunk, is the marriage of the Science Fiction and Fantasy genres (in their general ideas at least).

I’m going to use an example that might come as a surprise to some people: World of Warcraft. The MMORPG is, at first glance, high fantasy. You have the medieval architecture, elves, magic; everything you would traditionally associate with fantasy. But you also have gnomes and goblins. Those gnomes and goblins are the best engineers, making clockwork style machines since the game’s launch in 2004. Since then their influence has only spread throughout the game, making a motorcycle, helicopter or mechanical squirrel a common sight. And yet, despite this clash of technology and medieval architecture, it works. I don’t believe it would have integrated as seamlessly if the engineering style wasn’t SteamPunk. So, in my mind, SteamPunk is advanced technology (science fiction) that has the ability to fit into fantasy settings, whether it’s high fantasy or a Victorian alternate history. So, even though it’s a sub-genre, it arguably has an equal amount potential for creative expansion as Fantasy or Science Fiction.

That isn’t to say, however, that a more modern style of technology can’t be integrated with fantasy. Star Wars is the perfect example of when technology meets magic. But in that example, I feel like a traditional science fiction story incorporated magic as opposed to steampunk which feels more like a traditional fantasy story incorporated technology. Plus, any science fiction that incorporates magic will instantly be compared to star wars, where as steampunk doesn’t have a gold standard for people to judge new stories by, and therefore has more room  for creative interpretation.

Another good example of SteamPunk marrying the two genres is the video game Bioshock. The game takes place in an alternate past where an underwater city, known as ‘Rapture’, uses a number of SteamPunk style inventions to explain how a city can exist under water. The style has an early 20th century vibe to it, but I would still argue it is SteamPunk and the introduction of plasmids (genetic altering shots to give you magical powers) proves once again that the two genres can co-exist in the same space.

I admit, I’m still new to this sub-genre, so I’m no expert. These are all assertions I’ve made since I took interest in it. But, from what I’ve seen so far, there is a lot of potential here and I hope to see it gain in popularity in each area of entertainment whether it be books, movies, tv or video games.