Style vs Errors in Writing

Receiving critiques on what we’ve written can be hard. There is a gut reaction, when listening to criticism, to go on the defensive and accuse your editor of ‘not getting it’. While the author retains control over what does and doesn’t go into the book, it’s important to consider the question of style versus errors. Often times, early writers will point to a well known author and say ‘well they did it’ as an excuse for a missing comma or a misused word. But there is a phrase that I’ve always lived by and I think it sums up successful writers who have ‘gotten away with’ writing no-nos. That phrase is ‘you have to know the rules before you can break them’. A good way to think of it is to imagine a field that is off-limits to the public. One man walks onto the field because he doesn’t see the ‘no trespassing’ sign. A second man walks onto the field after seeing the sign. Which one is the better activist? Which one is more of a rebel? Which one is forging a new path for those behind him? Really, all we’ve learned about the first man is that he’s a tad clueless about his surroundings.

Writing with Style: Conversations on the Art of Writing
Buy Now

Another good way to look at this is to ask yourself what your original intention was when you were writing the story. Did you mean to say it was raining, or did you mean to say it was going to rain? Is the woman’s hair a chestnut brown or a sandy blonde? These things might seem like minor details in the large scheme of things, but if your editor points out that you might have said the wrong thing, ask yourself what your original intent was, rather than jumping to the conclusion that your editor is trying to someway remove your voice from the narrative.

There can be a feeling that, if you implement too many edits (based on peer critiques) that the book will somehow cease to be your own. But I can assure you that your writer’s voice will not be lost based on which edits you choose to implement. In fact, it’s quite the opposite. Since you’re the only one who knows the original intent of the book, every edit you choose is in the interest of that intent and voice. This is particularly true of plot/character related suggestions. If your plot isn’t working, your best course of action shouldn’t be to disregard what everyone says about it. You should ask yourself why it wasn’t working for them and how you can more clearly present it. These are the kinds of things that take a book from a draft to a working manuscript.

Here is an example of an entirely made-up line from a book:

“The wind wiped against the stone walls, dropping dew down the stonework.”

The first two things I would highlight in this sentence are ‘wiped’ and ‘dropping’. I would assume that the author meant to say ‘whipped’ and ‘dripping’ because those are more common verbs associated with wind and dew respectively. Technically speaking, maybe the author did mean to say that the wind wiped the walls and the dew dropped, but I made the suggestion anyway in case they had just used the wrong word while caught up in the momentum of writing. That way, it gives them an opportunity to say ‘oh yeah, I totally missed that’. Errors like this are particularly tricky because they don’t trigger spell-checkers. They’re spelled right and they sort-of fit into the sentence, but if you didn’t intend to use them, then it isn’t a style choice, it’s just an error.

Here is another example:

“The castle was old like a man nearing the end of his life and had fallen to disrepair.”

My biggest issue with this sentence would be a lack of commas, which add natural pauses to a sentence. In this particular case I would suggest separating the phrase ‘like a man nearing the end of his life’ with two commas, since the sentence doesn’t need it to make sense. Many great authors stretch the limits of punctuation, or throw them out altogether, but ‘forgetting’ to use a comma is much different than ‘choosing’ not to use a comma. You don’t get any points for style when you’re just being lazy. Often times the work that breaks the rules takes more effort than one that follows them. 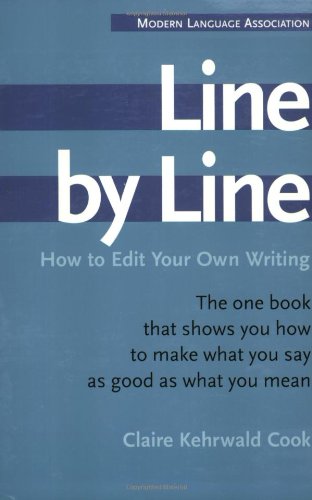 Line by Line: How to Edit Your Own Writing
Buy Now

Here is a different example:

“The queen was young, with bright eyes and flawless skin, despite the war she had seen.”

Now, if I were editing this sentence, I might suggest to the author that the queen not be so flawless if she had seen war. One expects a veteran to have scars, both mental and physical, which is a quick and easy way to visualize character traits. But, this is a good example of stylistic choice. Maybe there is a reason the queen never got injured, maybe it speaks to her chosen form of governing. Whatever the reason, the ‘right’ answer isn’t to change her into a scarred ex-commander. It’s just a suggestion I have based on the information I’ve been given as a reader. In this instance, you could completely disregard what I’ve said because the character still adheres to your original plans. In other words, there is a reason the queen is flawless, it wasn’t just because you forgot how to describe a character.

Here is another style example:

“The queen walked down the hallway, a shiver running down her spine because of the cold weather.”

When editing this sentence, I would probably recommend deleting ‘because of the cold weather’ in order to streamline the sentence. The previous section already described the weather and her shiver implies that it’s cold. However, that is my opinion, and if you wanted to keep the line, that would be your stylistic choice. My stylistic choice would be to remove it. But I feel like this is an important example because it’s one of my most common edits. Very frequently, when I critique someone’s writing, I’ll highlight sections that I either think should be deleted or reworded for flow. It is my opinion that the sentence “the queen walked down the corridor” is better than “the queen ambled down the mottled corridor, wondering at the cold weather that slipped in through the surrounding windows like the fingers of a dying man.” I’ve been told before that my writing isn’t particularly ‘flowery’ and I’m inclined to agree. I favor a to-the-point style, but countless authors have prospered with more flowery prose. Again, however, there is a difference between an intentionally descriptive sentence and a run-on. Sometimes a sentence just sounds awkward and if more than one reader points it out, then you might have to wonder if your elaborate description is more of a hindrance than a style.

I wanted to highlight these different kinds of edits because each one is done without malice. A good editor will provide comments based on what they think will make the book better. And every suggestion, by every reader, should be considered carefully. Style is a conscious choice, not an excuse.

Roughly how many edits do you make based on peer critiques of your writing?

Why is this important?

As self publishing gets more and more popular, it falls to us (the authors) to give it a good name. In the past, before ebooks, self publishing came with a stigma of low quality. It was not true of all authors, but there was no denying there was a ‘stink’ surrounding such projects. Ebooks have managed to break down barriers of cost and production value, but the quality of the work still falls on us. While many self published authors work their fingers to the bone to make the perfect product, there is another handful that insists they went this route because of ‘creative control’. It’s a noble sentiment, but we must be careful not to use ‘creative control’ as a mask for ‘I just don’t want to edit it’. Editors and critics are not a thing to be feared. They assess a project on its own merits and their comments should not be interpreted as a criticism of you as a person. While the initial comments can sting, and not every suggestion will be incorporated, we must accept that it is a part of the process of being an author and these people are trying to help. You can choose to ignore all of that, but when the errors are hammered out, that’s when your style really has room to shine. The worst possible fate for a novel is to have its story overshadowed by easily corrected mistakes.