Non-fiction and mystery horror writer Caleb Carr convinced me to read The Alienist when he wrote The Italian Secretary. The latter is a Sherlock Holmes entry that wittily and effectively matches Mycroft Holmes, in Her Majesty Queen Victoria's Service, with brother Sherlock and the venerable Dr. John H. Watson. The trio set out to investgate actual historical occurrences with zest and engaging interactions. I was sorry that the book ended and would have enjoyed a continuing ewspaper serial production, as in the early Sherlock Holmes offerings of Sir Arthur Conan Doyle in The Strand.

I enjoyed Secretary so thoroughly that when I found The Alienist and Dark Angel by chance during a spur of the moment outing, I grabbed them up in a bolt of lightning, rushing as if blown through a wind tunnel to the checkout stand in fear of being stopped in my quest for vicarious adventure. People eyed me as if strange.

Perhaps they have reason. I really have determined that a box of particularly good books be buried or creamated with me. However, if Rapture occurs during my day, they probably won't float up to Heaven. I suppose I must memorize them for reenactment on dull heavenly evenings after the all day dinner of long promise...

An Alienist Was a Psychiatrist or Psychologist

Why can I not meet such persons in real life? Perhaps Johnny Depp might portray him in a film one day.

When one sees a book that is 8" thick (I slightly exaggerate), one usually feels the contents must be boring and dull witted. Such is not the case with The Alienist . A densely packed story, very detailed, it contains action ans word flow that are swift and engaging. it moves. It stimulates the "little grey cells", if you like.

New York City. 1896. Theodore Roosevelt is the Police Commissioner and has a new type of crime to solve, although no one wishes to admit its variety - serial murder and mutilation and worse than Jack the Ripper's. Dr. Kreizler, an old Harvard schoolmate of Roosevelt's and reporter John Moore's, is called in to help, along with the investigator reporter.

Adolescent boy-whores from the disorderly houses of NYC are being killed at night and sliced ritually. Additional children, murdered and exhumed or found in unlikely places years later also show marks ritual torture. Kreizler devises the first use of the concept known today as criminal profiling and he is aided by Moore and a forward thinking woman recently hired by Teddy Roosevelt as secretary for the Commissioner's office: Susan Howard. She provides investigative abilities that are highest among the team that assembles in a secret office of investigation on Broadway.

The story, setting, dialogues, and characterizations maintain the 1890s style and historical backdrop of New York. The discussions of the foundations of psychology brought to life the work of William James and the courses I attended in the advanced history and overviews of psychology under the innovative professor David Hothersall at Ohio State University. They were the best courses I ever attended and Carr's book brought them all back.

The Work of Caleb Carr 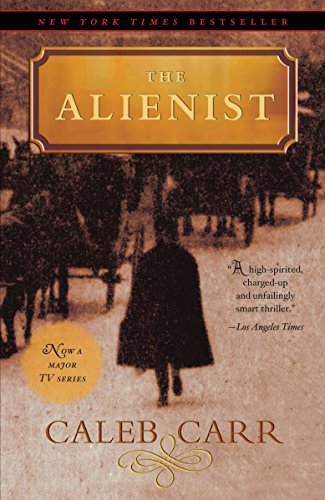 The detailed settings portrayed with historical accuracy and the characterizations of the protagonists, criminals. victims, and spookily possible non-entities all compliment the novel's plot. Through the plot, they scrutinize issues of a philosophical and religious nature and this is not often done in mysteries. Overall, this plot attempts to illustrate the obstacles faced by those who attempt to reconcile the struggles within society with those of a single individual in, but acting against, society - the serial killer.

The investigative team is similar to the original Star Trek® bridge crew, specificaly, it is diverse and non-bigoted in any way. This includes the Doctor, Harvard classmate and NY Times man Moore, Moore's friend, heiress and NYPD secretary Sara Hamilton; and two healed mental patients of the Doctor (one of whom is Black and very well educated). They attend the opera together while disapproving eyes look at them strangely. Parts of the story are much fun in this way -- later, a small almost-love triangle arises;  in a streetside cafe, people wager on whether pedestrians will be hit by the streetcar speeding around the corner. These scenes are fun and lighten the mood, only to be darkened again by the next crime popping up.

Theodore Roosevelt and a Big Stick in the Caribbean

Teddy Roosevelt, before his years as President of the United States, is a dedicated profession determined to clean up the corruption of the NYPD and the city bosses as well as the crime bosses in town. His team of detective brothers, the Isaacsons, are first rate in their particiation and leadership in The Alienist and its criminal investigations. They also become a highlight of anti-Semitism alive in the country in the late 19th century. Roosevelt includes younger people, Jews, and women in his police agency. very forward thinking, and the corrupt and the prejudiced by damned.

Particularly entertaining is a rooftop scene in which Teddy must face down a crowd with torches approaching a crime scene. He picks up a large piece of wood and begins to brandish it about as he gives instructions. This is a humorous scene that enacts his future slogan, "Speak softly and carry a big stick." I am still laughing.

The Alienist and Afterward

For any that might not know, an alienist is what is now a psychologist or psychiatrist. In the 1890s, psychology noted that mental illness included a state of an individual as alienated from society, his basic personality, and his connection with reality. This descibes some of what schizophrenia entails. The term psychotic break is a little similar in nature.

Dr. Lazlo Kreizler, then, is an alienist, studying the mentally and behaviorally alienated and helping as many as he can into functional living. It is his personality that this book encourages me to investgate further in Angel of Darkness.