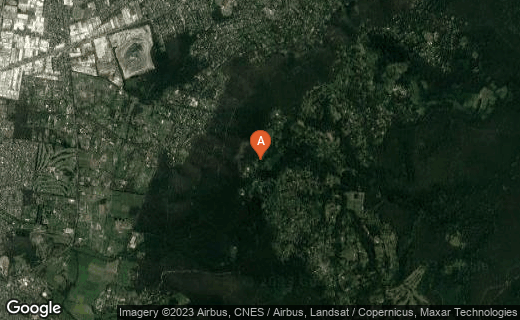 A thick forest atop the mountain ranges just outside Melbourne's suburbia, Australia.

Spontaneously deciding to clear his head, Robert, who was often not one for taking walks, found himself inappropriately dressed and appallingly unprepared strolling through the airy and softly spoken glens of the Dandenong Ranges in Victoria, Australia. Upon hearing the distant thunder rumble through the trees, substantially quieter than the rumble inside his stomach, his sense of adventure quickly replaced itself with regret for taking the second right off the beaten track and the last left by the road less travelled. He bumbled through knotted bushes and cursed when the dangling forest ornaments caught on his grey polyester jacket, and continued dancing and romancing through the stone-hard, merciless maze until, eventually, he tripped into an opening.

He lay on the ground for a moment, asking himself, not for the first time, how he'd managed to get so horribly lost and wondering if he did feel a drop of rain or if he was, in fact, imagining it. After several seconds he got up, brushed himself off, and saw, in middle of a ten-foot clearing, a bridge that stretched its rigid spine over a dry creek. Once upon a time the bridge, no longer than six paces long, may well have been painted green, but abrasions of age had lifted the paint long ago and left open sores of rotting wood. The shallow creek wound gently through the opening, an exhausted wrinkle under Earth’s aged eye to cradle her tears, passing with ease under the bridge and disappearing under shrubbery and vegetation.

He felt another drop of rain. A storm was on its way and nothing, except the bridge, could act as shelter until it passed. Robert approached and stepped a foot down into the creek noticing, as he stooped under the bridge, a message etched into its side: Write wish on creek floor. It will come true.

At first he scoffed, but something inside him straightened his smirk. The more he thought about it, the more he rationalised: there was certainly no harm in trying. He rummaged for a suitably sized stick, seized one as another clap of thunder cued a soft sprinkle of rain and, after a brief moment of thought, began scribbling in the dirt. I wish for $100. He reviewed his wish. He added another zero.

He waited, and nothing happened. Although fully expecting it to fail, he would have been lying if he said he wasn’t disappointed. He turned around to reassume his shelter when something on top of the bridge caught his eye; a small stack of hundred dollar bills speckled by the steadily increasing shower. It worked! “Impossible.” He muttered

Robert didn't notice the moderate rain; he was overwhelmed with ideas of things to wish for next. The stick moved with greater ease through the moist soil while he wrote: I wish for a penthouse by the ocean. A keychain of keys with a red tag labelled P-23 lay on the bridge, appearing at no individual moment as if they had always been there. Robert slopped a drenched clump of fringe from his face and buried the keys beneath the crumpled cash in his pocket.

The rain began to pelt down and he wished for a shack to wait in until the storm passed. It appeared, sturdy and strong across the way. The bottom of the creek grew muddy. Robert realised he would only have enough time for one more wish. After that, the creek would fill and may not dry for months, even years. Thunder roared and wind whipped through the trees. One more wish. Lightning lit the sky electric white and Robert knew he had to make this wish count but as he began to dig his stick into the muddy soil it snapped and lodged into his palm. He screamed and pulled it out, splashing through the puddled creek basin for another stick which he broke from a fallen branch as a tree tore from its roots with a grinding crunch and mutilated with another in a fusion of Earth's raw destructive power, splintering with a deafening crack and resonating its impact deep into the earth. The creek was quickly filling, but Robert persisted. Finding the most elevated mud, he scrawled his last wish. I wish all bad people disappear.

The storm ravaged on, ripping through buildings and streets and reshaping mountains, but there was no one there to see it. The rain became one with the ocean and the entire planet remoulded as though it were made of soft clay. No humans suffered; they had all disappeared. Soon after, the storms subsided and all souvenirs of human endeavour lay as rubble deep within the Earth, mulched into the foundations of her new world.

And deep within an airy and softly spoken glen, the second right off the beaten track and last left from the road less travelled, awaits a winding dry creek with a green bridge stretched over it.

Your feedback helps my writing!

What did you think of this story?