The Cries Of Vampira by Actor Sean H. Robertson of Detroit 187

If you love action, adventure, and horror, then read The Cries of Vampira series, beginning with Volume #1: The Horror Of Gaad Grey, The Evil Alpha Werewolf. It is more than Gothic horror, being a microcosm of life on Earth.

Having become fascinated with Bram Stoker's writing and setting, and his stories Dracula, and Dracula's Guest in middle school, I was never able to find anything similar so intriguing. The rest all left me pale, and not from loss of blood, but from boredom.

However, The Cries of Vampira in its first installment is such a book as to engage and fascinate the young reader, but adults will enjoy it as well. It stands on a foundation for an enticing film script and I can picture the scenes as I read and re-read each chapter. The storyline and themes capture the daily struggles and decision making checkpoints that we all face in life, regardless of gender, ethnicity, family of origin, or faith. For the middle-school and high-school student, these points can be difficult and frightening milestones.

Who Is the Author?

The creator of Vampira - a community and a nation of beings, is Sean H. Robertson of Detroit, Michigan, a city that has endured its share of torment and anguish since the decline of the auto industry. Such anguish is palpable among the characters of his book, those as others we all face in our daily lives: hope, love, doubt, betrayal.. and loss. The mood and emotions of the book can apply to Vampires, to Detroit, the individuals and families hit by the Recession fo 2008 - 2010, and the the middle- or high-school youth in the tumultuous and sometimes unsafe world of adolescence.

Some teens never make it out of adolescence in America, tormented by differences, by conformity itself, by bullies, by confused emotions, by loss and misunderstandings. Some escape through suicide, and alarmingly so in the rising numbers discussed in health promotion education classes, in churches, and at City Hall across the nation.

Sean H. Robertson is sensitive to the needs of these young people, as he feels the needs of American cities and people to pull out of the sewer-depths of depression. to this end, he contributes 10% of the proceeds of this book to the Suicide Prevention Hotine.

An additional attraction for readers of his book is that Mr. Robertson is not only a author, but a filmmaker, and not only a filmmaker, but an actor. He appears in Detroit 187 on ABC. 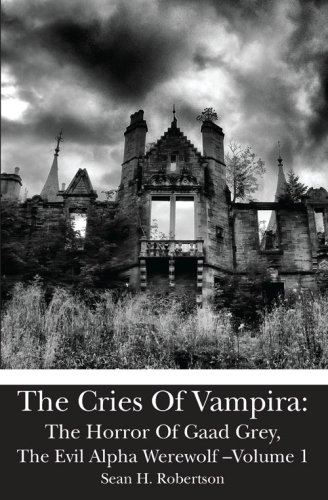 The Cries Of Vampira: The Horror Of Gaad Grey, The Evil Alpha Werewolf -Volume 1
Author Sean H. Robertson has pledged to donate 10% of all boom proceeds to the Suicide Prevention Hotline, a vital service to Teens, but also to people of all ages. This book is first of a series for Young Adults.
Buy Now

The Horror Of Gaad Grey, The Evil Alpha Werewolf #1

I may be a moderately well-read adult, but the narrative of the werewolf god's creation and expulsion from his Home sent a chill down my back as if from a metal pitcher of cold water and ice cubes poured down the back of my collar. The hair on my neck stood up as well, each strand wanting to run away. I could actually see a dark grey cloud of oppression spread abroad from this god's embrace of another being.

Evil is not always found in the deepest black thing, nor the black thing disguised as radiant white light, as scripture warns, but difficulties and lurking multi-toothed jaws of destruction often await in the grey areas of life that force decision making. In this story, evil is a "grey wolf", and that is often how people feel. The greyness of the potential enemy is bone-shaking and It weaves cobwebs in the brain. How often teens must feel this. Adults do feel this.

For other excitement, the tale features a set of dynamic, swashbuckling teenaged triplet Vampire assassins that fight evil and love Humanity as much as they love their own species and Vampira, their community and estate in Scotland. Vampires are almost angels in this regard -- The Werewolves are the enemy of both Vampire and Man. I think many young readers these days would as soon have a Vampire champion defend them as an angel and the device works. Many champions have begun their careers as the misunderstood Other: different. Many young people can relate. This is one of the intense draws of the Vampire concept for teens, other draws being power, leadership, strength, confidence, romance, and more.

A Scottish castle is an excellent Gothic backdrop to the story the features at least four protagonists that struggle with life.

Each protagonist features his or her own duality - an inordinate Good versus journey-hindering Weakness.

And the King - killed by wolves in battle early on as he slayed the leaders of the grey pack - Gaad Grey's parents. There is plenty of action in this story, including sword fights, dripping jaws, carnage, and similar, but the descriptions are not so graphic - one's imagination rushes to fill out the gore and is much more effective than any printed bloodshed.

The evil Gaad Grey, the leader worshipped by his Grey Wolves, is also Strong, but Reckless - his lack of fear and belief in his own indestructibility feed into both. This is a morality play of sorts and one that I like, with scriptural and real-life parallels and situations that will help teens to realize that they are not truly all alone in their differences.

Read the story and enjoy the battles of the Vampire Triplets against their revenge-seeking counterpart Gaad Grey.

10% of All Book Proceeds Go To