Author of suspense and thriller novels that can be found on Amazon!

Zachary Mckeon wastes his life away in the allies of Newborn city. He’s a stoner who makes it a daily ritual to get higher than a kite. Lying there on the pavement of the pot hole infested dark alleyway, he wonders what his ex-wife was doing at this very moment. Sherry Mckeon (now Sherry Stevenson) left Zak over six months ago when he wouldn’t give up the extracurricular activities he so much enjoyed. Why worry about having a happy marriage when there is so many wonderful drugs in the world? He told her that on the day she left him. He missed her but definitely not enough to change his ways. The feeling he got from the countless drugs he used was the only thing he needed to keep him happy.

The alleyway lit up with a bright white light as lightning struck in the dark sky. The once twinkly star filled blackness was now covered with a storm cloud. Rain was on the way and from what the news was saying it was going to last the entire night.

A little rain will never hurt me, he thought to himself while taking a puff of his joint.

With no lights in the alleyway it was impossible for anyone to know he was back there. People would walk past the entrance to the alleyway oblivious to the mind numbing fumes emanating from within. With another inhale he leaned his head back taking notice to a window up above him with a light on. Somebody was home and they were playing a loud tune which shook the glass like a ripple in water. He smiled at his smoke knowing some of those ripples were caused by it. Heavy Metal wasn’t the type of music he would usually listen to, but with the approaching storm looming it just seemed to fit the mood.

Thunder rolled across the sky and another lightning bolt struck in the distance. He could see the streak, piercing through the night sky in long electrical zig-zag lines.

“This is going to be one hell of a night,” he said while adjusting himself on his cardboard bed. Above he could see a lamp sitting on a desk in the bright window. Its shade wobbled as the bass hit on the sound system. He watched it with his glazed over eyes as it seemed to be hypnotic. Occasionally he could see a woman pass by the window. She looked as if she was preparing a dinner as she sprinted back and forth. Her blonde hair bouncing all over the place as she frantically paced.

Taking another puff of his friend, he held it close to his face as he stared at it in the dark. Lightning struck again followed by thunder which lit up the alleyway for a split second. This time he saw a shadow of a person being cast on the walls in front of him. Jerking his head over toward the entrance of the alleyway, he saw a dark figure standing there which looked like a silhouette. Thinking it was a cop he quickly dowsed his joint and stuffed it into his left pocket.

“Hey man, I was just ch-chilling back here,” he said in a nervous stutter. The dark figure just stood there looking at him. The lightning flashing in the sky made his shadow appear on the building wall next to him. It looked as if there were two dark figures standing there, which gave Zak an eerie feeling.

Damn drugs are messing up my mind, he thought.

The dark figure slowly began to walk toward Zak without saying a word. His steps echoed throughout the entire alleyway. As he inched closer Zak noticed how tall he was. The guy had to be at least seven feet in height, and from the sounds of his steps he must weigh a lot, or was that just the drugs causing the noise?

“Hey, look man I’m just trying to rest here. This alley is way too small so could you go somewhere else?”

The dark figure was close enough for Zak to see there was no badge on this guy. In fact he was dressed in a long black trench coat with a black cowboy hat. Strange gloves cover his hands with some kind of logo on them, too dark to see. His face was still too dark to make out any features so there was no way Zak could see what he looks like.

“Who are you?” Zak asks with nervousness in his voice. The dark figure didn’t answer as he stood there silently beside him. A foul odor made its way into Zak’s nostrils which made him cover his nose fast. It smells like a mix of death and moldy cheese. Looking at this stinky dark figure, he couldn’t help but feel intimidated.

Above the both of them in the bright window the woman could be heard singing along with the song. Occasionally she would dance past the window with a wooden spoon held in her right hand pretending like it was a microphone. She was oblivious to the happenings just outside her apartment window. Back in the alleyway the dark figure was still hovering over Zak. Rain began to pour down soaking everything around him, even Zak’s cardboard box. The sound of water hitting the pavement and rushing through the gutters of the buildings were the only sounds to be heard.

“What do you want?” Zak asks. The dark figure tilts his head off to the right as if to consider the question. In the darkness it seems as if he were smiling at Zak. The dark figure lifts one arm and points up at the window. The woman could be seen jumping up and down with the beat of the music.

“What about her?” Zak asks.

The dark figure began to walk slowly over toward the building. He stops just under the window of the dancing woman. The song was something Zak had never heard before, loud guitar sounds with drums beating countless notes. A singer was screaming his lungs out with words that didn’t even make sense. The dark figure places his two hands on the side of the building and begins to crawl upward. He ascends the wall like a bug would do, left arm and leg pulling up followed by the right arm and leg. Zak’s eyes widen in disbelief.

How could he do that? He wonders as he lays there on his cold soaked cardboard bed. It has to be these drugs, maybe Sherry was right. I should have quit long ago.

And if he would have listened to her then he would probably be sitting in the living room of their old country home in Montana. Watching TV with a big bowl of popcorn and a beer, Sherry curled up next to him. But unfortunately he’s in this alleyway watching a seven foot stinky guy climbing up the side of a building. He reached into his pocket and tossed the remaining drugs away.

Above, the dark figure hangs from a pipe just outside the window of the woman’s apartment. He holds onto the pipe with a grip that puts small dents in the metal, and only with his right hand. The rest of his body dangles there as he stares into the woman’s window. Light shines on his face, just a little, and Zak could see the left side was covered in scars, no those are not scares, those are teeth. The cheek that should have been there was missing. His nose appeared to be missing and his eye was large, dark and black.

Oh my God, Zak thought while trying to get up and run. The drugs have immobilized him though. His legs might as well have been cut off because they weren’t working anyway.

The woman pranced in the apartment and came to a stop as she sang along with the song. Her back toward the window she held her left arm in the sky as she screams into the wooden spoon. The dark figure places his hand on the window caressing it like he was anticipating killing her. She backs up as the song comes to a close, her voice screaming louder and louder with the screaming artist who is singing this disaster. Standing next to the window she pumps her arm downward giving one last jump as the song finished. Turning around she comes face to face with the dark figure. Giving another loud scream she watches as the dark figure smashes the window in front of her. Trying to flee she trips as a large arm reaches in grabbing her. With a grunt the dark figure pulls her through the jagged glass of the broken window. Placing her over his shoulder he releases the pipe and plummets to the ground below.

THUD, and Zak could feel the ground shake.

She kicks and screams but was unable to free herself from his grip. The dark figure walks past Zak as a lightning bolt flashes in the distance. Zak could see the dark figure’s grotesque face smiling at him with those large dark eyes, missing cheeks and all. The woman sees Zak on that soaked cardboard and begs for him to help her.

”HELP ME PLEASE!” She screams while holding out her arms in Zak’s direction. A lightning bolt seems to heighten the horror with a flash and a rumble. He watches on as the dark figure rounds the corner leaving the alleyway behind. Out of sight now, Zak can hear a door opening followed by the woman being thrown in. She screams again only to be silenced with what sounds like a smack. He can hear the door close and then another door open and close. An engine starts up which is then placed into gear. As the vehicle drives past the entrance to the alleyway some words on the side could be read. They were lit in a red neon glow and stamped on the side of an ice cream truck. He read the words with another flash of lightning rumbling overhead.

As the vehicle drives away there is only one thought going through Zak’s drug filled mind.

“I don’t think I’ll ever buy ice cream off of him.” 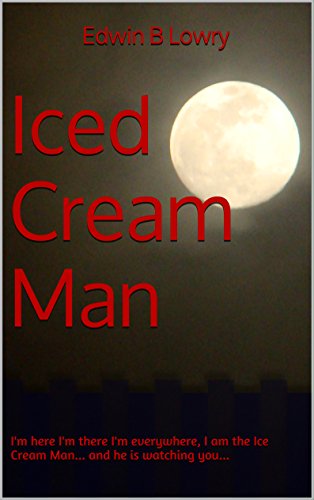