John Biggins' books are always bigger than life. He has a rich taste for irony, and maybe it is what drew him to Austria-Hungary in the first place - the idea of larger than life figures and fantastical plots and adventures set upon the stage of the old, decaying, decrepit Austro-Hungarian empire, so lacking in dynamism compared to the hungry new nations which surrounded it. Or maybe it is the fact that the adventures take place in Austria-Hungary that makes them somehow believable, that only in an empire so strange and odd as Austria-Hungary could they pass, can disbelief be suspended, can the bizarre and the exotic be truly embraced. Only in an empire like Austria-Hungary could a full title like "The Emperor's Coloured Coat: In Which Otto Prohaska, future hero of the Habsburg Empire, has an unexpectedly interesting time while not quite managing to avert the First World War." There is a lovely irreverence about it which I have always appreciated, and which every book of John Biggins reveals again and again.

The Emperor's Coloured Coat revolves around the story of Otto Prohaska, who in the year of our lord 1912 made the decision to become a certified pilot in the Austro-Hungarian naval flying service. From this decision come the consequences: crashes and chance encounters with royalty, posting to Bosnia, and being caught up in as an observer of a plot to assassinate Archduke Ferdinand, and then ultimately a vast journey around the world in an effort to return home. Of course, much more passes along the way than this - but you would hardly like it if the book was spoiled, wouldn't you? Suffice to say, that there is plenty of action, adventure, and intrigue which happens on the vast odyssey that Otto Prohaska undertook, a never-ending succession of discovery and excitement.

Each of the books in the series sparked by A Sailor of Austria plumbs some particular emotion, some characteristic, which sticks in the memory. A Sailor of Austria has its roller coaster switches between joy and despair, between love and life and the travails of war and the horror that it wreaks upon its servitors. The Two Headed Eagle plunges into the deep melancholy sadness and brutality which defined the horrific combat of the war - never delivering itself fully to the voyeurism of pain, but imprinting upon the reader the tragedy of the conflict that it covered, its randomness that could strike anyone with its cold and heartless death, and the terrible changes that it exerted upon the people who served in it. A dry sense of humor and irreverence, laughter, and irony may be constant companions, but the volumes were always more than just the laughter they contained, even if references to camels in submarines might be the sentence sprayed across any book review referring to them.

If there is any single emotion or sentiment which can be pulled from the pages of The Emperor's Coloured Coat, it is without doubt the feeling of absurdism. Aeroplane crashes at royal parties, lusty Polish countesses, Bosnian pig smugglers, comically inept Serbian revolutionaries, Francophone Montenegrin mountain countesses, torpedo-armed Chinese sailing junks, Czech-led jungle tribes, flat earther steamship companies, the list of the bizarre and the absurd goes on and on, populating the story with character after character until one becomes all but nigh lost in the whirlwind.

The great genius of Biggins, besides his talent for description, infinite number of historical details, and cutting sense of irony and dry - or dark at times - humor is his ability to create vivid pictures of characters and people, who flash onto the stage briefly before disappearing. Most of his characters in this book are transitory, which is perhaps the weakness of Biggins - that most of the characters he creates lack permanence, having to be affixed strongly to Prohaska to remain in the reader's memory - Sophie, his wife, or Toph, his pilot during Phohaska's service on the Italian front. In this book, we greet vivid characters such as Pani Bozena, Prohaska's eccentric paramour, or the Montenegren noblewoman, Gospodarijca Zaga, but fleetingly - Bozena left behind to begin the great adventure across the world, Zaga swimming in the waves behind a passing liner. Biggins' has the ability to draw up brilliant characters, but they never last long, and Otto Prohaska at the end of things is left as his voyager through the depths of his memories, marching forward to the present. Perhaps it is that Biggins is a portrait painter: his descriptions of Archduke Franz Ferdinand or Emperor Wilhelm II are vivid and powerful too, bringing to light historical figures in a way which no textbook could ever hope to do so. But a portrait can only be seen briefly or else it turns still and stiff, without the movement and animation that characterizes humanity. It was a wise decision that Biggins chose the Sailor of Austria series as an autobiography of Otto Prohaska.

If The Emperor's Coloured Coat is anything, it is an adventure story. All of the books of A Sailor of Austria are adventure stories of course, but this one is defined by it, about the unstoppable power of events that set us moving towards lands untrodden and destiny unknown, about the magic and mystique of danger and excitement in exploration and discovery. The question which arrives at some point is whether it becomes too pat, too coincidental, whether things align up too neatly to follow the author's pen and the story which he has laid out in the book. For no doubt about it, The Emperor's Coloured Coat and its absurdity is something which is more than just the contemplation of a tableau of insanity set in front of us by the universe, but a Rude Goldberg machine which whirls one about and leaves one gasping for breath as one follows the chain of impossibilities.

But this zaniness is one which suits the time, and I can't help but think that Biggins must have drawn some inspiration for the madhouse of the story around the near-salvation of Archduke Franz Ferdinand from the assassination of the Archduke himself in 1914 - after all, if anybody read about the assassination in all of its comical splendor and dismal disaster without knowing that it was a real event, then one would laugh at the author who had come up with such a clever and all-too coincidential story. The Emperor's Coloured Coat is like it on a grand scale: crazy, insane, but as you read it with alternating laughter and horror one can't shake the feeling that it is anything but impossible in the surreal days of 1914.

This feeling for the time and for the events which punctured history is something which any of John Biggins' books reflects wonderfully, and it truly qualifies it as a work of historical fiction, a fine instructor, illustrator, descriptor, teacher, guide. I like to think that I know quite a lot about the era and thus the amount of revelations are low, but the pages of history are brought to life by Biggins' work, showing the way people lived their lives and the currents of history. Towns renamed in the pursuit of Magyrization, immigration the absurdities of the Austro-Hungarian bureaucracy, German colonial settlement, aircraft, ships, all receive their detail and place: the book has a feeling of the authentic and real about it, like it really is an autobiography rather than a work of fiction.

Any of Biggin's books is well worth the read. The Emperor's Coloured Coat is an incredible adventure story, written with wit, irony, humor, drama, and grandeur, and if its theme may be absurdy, it is one that too plunges the range of human emotions, from the introspection of a soldier after having slain an enemy where he might just as easily have been the man to die, to carefree happiness in amusing oneself with comrades, to hope and joy about what the future might bring, to despair and sadness about the terrible century of reason and progress of the 20th century, its pages written with the blood of murder, genocide, war, and wanton death. It is a yarn which is sure to keep you reading from the first page to the last, with the only interruptions being laughter and tears. It doesn't to me plumb the same heady cocktail of emotions of a Sailor of Austria, but the tale is still one which deserves to be read as a thoroughly brilliant piece of historical fiction.

4 stars for The Emperor's Coloured Coat 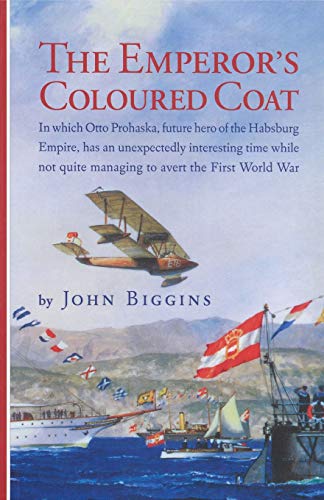 The Emperor's Coloured Coat: In Which Otto Prohaska, Hero of the Habsburg Empire, Has an Interesting Time While Not Quite Managing to Avert the First World War (The Otto Prohaska Novels)
Buy Now