Within the pages of Javier Marías’ novel A Heart So White, it could be argued that there is a clear theme of all men as “Bluebeards”, as tools of their own lust and urges that, whether intentionally or unintentionally, ultimately serve as a force to injure and even destroy the women whose stories interlace with theirs. We see it in the way that men like Bill and Guillermo act, in the almost misogynistic practices of Custardoy the Younger, and in the deadly secrets of Juan’s father Ranz, but there is, however, as with all great literature, still a certain sense of hope that the author seems to give us along with this strong and singular theme. Hidden within the relationship as it stands between Juan and Luisa, it almost seems as if there is a message of hope that perhaps a love can exist between two people that blossoms and continues to grow without being corrupted or tainted, a love heralded by kisses and the feeling that your partner always has your back– but is this something that can really be achieved and held onto? Is Marías telling us that, as wonderful as such a thing is, it is only temporary, and that ultimately, such hopes are little more than the author (or perhaps society) giving us exactly enough rope with which to hang ourselves?

“I want to f**k you”(Marías, 154) says the faceless Bill in his second letter to Berta in A Heart So White, immediately driving home the truly tainted nature of the entire video dating experience she puts herself through (and later involves her friend Juan in as well.) We see during this sequence of events how the men involved in the video dating come and go, using Berta for their own ends once and then moving on, disappearing once their role in Berta’s steady degradation toward some fathomless abyss of perpetual loneliness has been fulfilled. We see it in the way “Bill” devalues both her body and her entire self as a woman by saying “You seeing my face would be equivalent to me seeing your body”(Marías, 161) just as we see it in the way Guillermo says he is willing to kill his sick and dying wife to be with Miriam, words worthy of a “Bluebeard”, to use the words of Custardoy the Younger, or perhaps even Ranz, begging the question– would Miriam truly accept the death of Guillermo’s unseen wife, or would she, like Ranz’ second wife, Teresa, ultimately commit suicide as well, having heard the words “I love you so much I would even kill for you”(Marías, 253) coupled with the ominous “I already have” or “I have done the deed.” (Marías, 253) Perhaps it is also just as likely that Guillermo does not mean what he says and instead intends to simply continue to use both women, (his wife and Miriam) steadily destroying them from within with his poisonous lust, just as likely perhaps that Guillermo may in fact be Bill, the former of which just happens “in English translates to William, the diminutive of which is Bill”(Marías, 161). With so many similarities rising up between them, even our narrator, Juan, seems convinced that the two men are in truth actually one man, and we see him as he ends up stalking Bill in a manner that exceeds the simple “You could go there, identify the mailbox and keep a watch on it, wait there and see his face when he goes to pick up his mail”(Marías 166) that Berta requests. He even goes so far as to tell Berta to mention the name “Miriam” during her first date with Bill, to “just drop the name into the conversation somehow or other”(Marías 194) as a secret way to attempt to reveal his suspicions about “Bill’s” real identity, to test his theory that the tainted, adulterous everymen, Bill and Guillermo, are one and the same.

Custardoy the Younger’s approach to women is perhaps as vulgar and crude as Bill’s, if not more so, and nothing makes this clearer than the line put forth by Juan that he knows “of prostitutes who, after spending a night with Custardoy the Younger, have left, terrified, and have always refused to talk about what happened, even if he’d taken two of them to bed and they could therefore encourage and console each other.”(Marías 118) When he asks Juan about Luisa, Custardoy isn’t one to ask tame questions about love or gentler topics, but instead prefers to dive in headlong and ask Juan about her physical characteristics instead. He is the young stud-horse who Juan suggests that his father Ranz lives vicariously through, though it could be said that even he, with his strange objectifying of the opposite sex, is not the level of Bluebeard that Ranz is, or rather, became, in destroying one woman utterly in order to be with another, and then inadvertently destroying the second with the knowledge of what he’d done to the first. Even Juan himself shows that he is not totally free of what could almost be called “Bluebeard’s curse,” as we can see from the way he acts as he films Berta for Bill and keeps it a silent secret from Luisa, or the way he undresses Nieves with his eyes, idealizing her younger form and using harder, crueller words for the effects that the years have had on her body, commenting on her “broken, inkstained nails, her slim figure going to fat, [the rest of her] which I watched blossom, becoming flaccid” (Marías 96) but in the end, these transgressions are as far as he goes. He does not sleep with these women, does not use them, as Guillermo might have, nor does he kill his wife to be with them, as his father Ranz might have, in his younger days. Instead, he stays true among this sea of tossed away and abandoned women, “Gloria or Miriam or Nieves, or perhaps Berta” (Marías, 266) and strays from the path set by men like Ranz, men like Bill and Men like Custardoy, as these women are lumped together in a line leading up to Luisa, the one woman in the entire book who stands perpetually on the proverbial knife edge, suspected of harboring dark secrets and yet sharing conspiratorial smiles with Juan as she says to him little more than “So now you see.”(Marías 270)

In the end, it turns out that Luisa is the only woman in the entire book who does not fall from the precarious balancing act of love and lust, who is not abandoned, degraded or destroyed by “Bluebeard’s Curse”. She is different, she outlasts even the high-ranking English Politician (who falls on page 175, while the Spanish male counterpart continues on in his post) and she is always a step ahead of the fires of destructive lust, protected by a gentler love. While each of these other women are tied into imagery of a carnal nature (Gloria and Miriam are victims of the lustful and adultrous actions of Ranz and Guillermo, respectively, Nieves is an old crush of Juan’s whose figure he describes in depth, and Berta is an old lover who he films and seems to physically admire through eyes he claims are more Bill’s than his) Luisa’s body is only occasionally mentioned in a way that could perhaps be misconstrued as sexual (the recurring image of her breast, whether it be trapped by the cutting straps of a slipping bra or pressing against Juan’s back as a sign of love) but this is ultimately, I believe, an image of love, rather than of sex and lust, as the narrator states: “It’s always the chest of the other person we lean against for support, we only really feel supported or backed up when, as the latter verb indicates, there’s someone behind us” (Marías, 66) and that when couples sleep, they do so in this fashion because “they have only to turn around and see before them the face of the person protecting them, the person who will let themselves be kissed on any part of the face that is kissable.”(Marías 67) It is these kisses, which relate to none of the other men or their conquests of women, that are a key ingredient of love, not lust (consider Bill’s immediate jump into “I want to f**k you”[Marías, 154] without the necessary romance, without the kisses. He just wants to see her naked.) In A Heart So White, Luisa is the only woman who is not a sex object, not an obstacle. She is loved, and while the love between her and Juan seems strong, there is still the fear woven into the storyline that this love could be transitory, a fragile web, or perhaps a shroud over the lustful truth that could ultimately end on the note of secret adultery, an adultery that, Marías takes great pains to make clear, Juan secretly suspects may already be occurring. 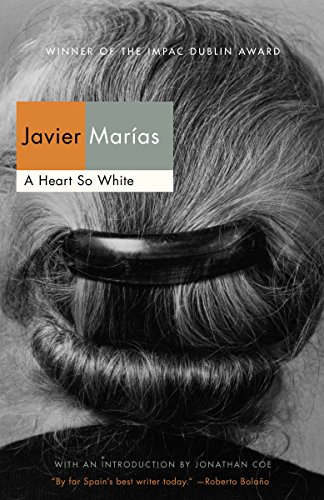 When we reach the final few pages of A Heart So White, caught up in the whirlwind events and repetitious imagery presented to us as everything coalesces and comes together to form a powerful new whole, Javier Marías leaves us with a dark lack of resolution in the relationship between Juan and Luisa. Throughout the book, we are haunted by the phantom specter of Custardoy the Younger hovering outside the window of Juan and Luisa’s flat, but is this a dark omen in the end, or is he merely a pale shadow of a sad kind of envy in the heart of a Bluebeard, wishing that he too could experience the kind of love that Luisa and Juan share? Can it be seen as hope for the future? Is the trend of the everyman bluebeard destined to be broken and cast aside in the relationship forged by Juan and Luisa, or is it merely a matter of time before the bond between even these two lovers is tainted by the lustful actions of Juan or of another man who manages to worm his way into Luisa’s heart? Perhaps with this ending, Marías is leaving the decision up to us, and as if it were a relationship the reader himself were involved in, there is only the awareness of the actions we take and how they affect those around us, but ultimately no way to peer ahead, to skip to the end of the book, as it were, and see.