See yonder in the clearing

There among the cheering throng

Standing there surrounded by admirers

Yet still all alone

There's the fighter, aye the warrior

Who remembers every blow

As the paparazzi flash around

The fighter wants to go home

From the humblest of beginnings

Born among the dust and dirt

Clothed in scarlet, meant for purple

With the clods stuck to the bottom of her shoe

With no natural defenses

What could she do?

When everybody loves you

People forget that you weren't always that way

If they ever knew

The tales of high adventure

The things no one else would do

That still led back home where no one lived

The fighter wears them all like chains of platinum

Even those close to the fighter

They've never tasted all the bile

Nor do they know the joy and ease and comfort

Or just what it means

The ones you choose betray

But they do it out of ignorance

The shadows called to the fighter

And to them she almost went

She almost wound up lost in darkness

When the dazzling light called to her

But she was scared and helpless

And the ones she loved said “no”

And she buried the proof

Down deep where no one could see

But those who pretended not to know

Finally thank the fighter for doing what

The bed has claimed it's victim

Now the fighter hangs on

For one last round

Though she's ready to leave the arena

There are only three young reasons

That have kept her hanging on

She's earned her rest she want to go

But life is not that simple

The one who's in her corner

Hangs his head again to cry

And tries not to let her see it

For what's not her fault

And though oh so many love the fighter

Now the paparazzi have all gone

The bag is hanging dripping wet

And there's no comfortable place to rest her head

Her body's racked with pain

And she sometimes forgets

Thinking that last week was yesterday

To do simple things and needs the help that's offered

And cries sometimes in agony

For the moments when nobody is there

We all remember the fighter

But the fighter has now gone

The one who is left in her place

Moans in her sleep

That is what the man cries though sometimes

But she keeps fighting on. 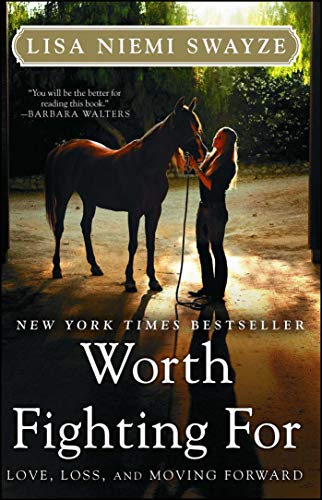 Worth Fighting For: Love, Loss, and Moving Forward
Buy Now