The Five Fists of Science 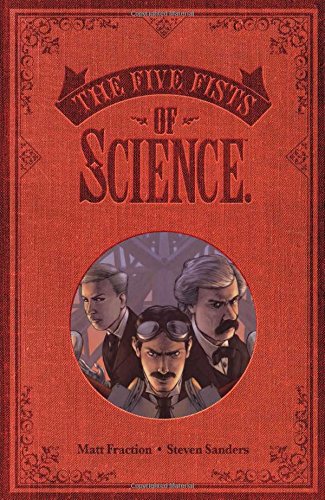 The year is 1899, and the only thing standing between J.P. Morgan's demonic hordes and their goal of world domination is the dynamic duo of scientist Nikolai Tesla and famous American novelist Mark Twain. Be there as Nikolai Tesla (AKA, the Master of Lightning, the Millionaire Playboy, etc.) battles ferocious beasts of light and energy with his towering "Tesla-Tronic Dynamo" and finally takes the fight to Morgan himself in a battle to prevent the end of the world itself! It's a thrill ride of unique proportions and design that you won't forget, and that will have you coming back for more again and again.

Written by Matt Fraction and Steven Sanders, "The Five Fists of Science" is truly a unique experience. it's wonderful, original, inventive-- the characters are believeable and fun, while still staying true to their historical selves in many ways as well. You can't help but love them-- Mark Twain is the king of showmanship, the master of swaying the public, and my favorite character in the book without a doubt. Tesla has his charm, and with every one of his odd personal idiosyncracies (like the fact that he hates hair and has to calculate the cubic volume of every bite of food he eats before he eats it) cropping up at one time or another, he's an interesting character to say the least.

All in all, I give this amazing steampunk-esque piece of semi-historical fiction a solid five stars out of five for it's originality and strength of story. Don't be swayed either way by the fact that it's a graphic novel-- people of all ages and backgrounds will find "The Five Fists of Science" deeply satisfying!

And remember, you can't spell "Action and Adventure" without "T&T" (Tesla and Twain)