An avid reader who shares her love of books and their contents with others.

Little Forest is one small village among a few town in a small area in England. Beth and her best friend Veronica have been dreaming of escaping Little Forest, as small town life is "boring". Even though they are planning to escape together, something tears these best friends apart. With Beth not understanding how her best friend could stop wanting to be her friend, she is also curious about the death of a co-worker and some strange things going on in Little Forest since the new residents came to town. With the mystery of what is happening and her new close friendship with Will, a boy she always found annoying and pathetic, Beth is set out to investigate, if not to just try to figure out what is happening, and maybe to see if any of it has to do with her best friend no longer wanting to be friends. With Will by her side to help keep her nerves under control, weird things begin to happen, mostly to Beth. With sudden auditory and visual hallucinations, Beth begins to wonder if she is going crazy and with the only person she once confided in avoiding her, Beth is left to not having anyone to confide in. Especially since when she does, the person rejects her ideas of what it might be and thinks she might have gone a little off her rocker or has been drinking too much to which causing these hallucinations. With possible murder, weird hallucinations and the loss of people to trust, Beth is left to trust Connor, the Irish newcomer, when she is out in the woods. Considering, he seems to be the center of the weird happenings in one way or another, Beth needs answers and hoping he can solve them. Even if he has answers, can he help her understand the hallucinations and her best friend's weird actions? 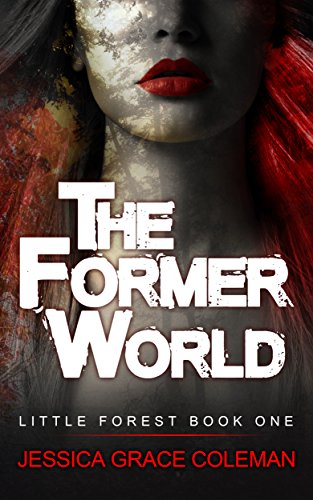 This paranormal mystery starts off a little slow in my opinion, but understandably so. It is set in a small town, surround by a forest along with a few other small towns. Even though, the background information that is given by Beth, the main character, you can't help but wait to get to the good stuff. With newcomers in a small town, it isn't a surprise that seems to be all Beth can think about, since he is Irish and supposedly good looking and around her age. Beth is 21 years old, or turns so in chapter one, so we can all understand that point. Nothing like a new mystery man in town to spike those hormones, so to speak. At first, this seems pretty normal and you don't think to much about it. That is until someone dies. Emma, a colleague of Beth's from work, turns up dead the morning after a long night out celebrating Beth's birthday. Though, it was declared a drinking accident, things don't end up. Like time of death and when Beth saw her outside the club the night before.

At first, I had thought that Beth hallucinated seeing Emma outside the club, but it quickly faded when the Detective who ended up questioning Beth and Rach, a friend Beth worked with, seemed to get uneasy with details Beth gave and how he seemed persistent on how Beth might have been confused about who the woman she saw was, due to her heavy drinking earlier in the night. This had kept me wondering, but it got really strange when her best friend just stopped wanting to be friends after Beth got off of work that same day. I began to think it was extremely odd and found myself curious. There were lots of things in this whole book that kept me guessing. Especially when Connor was introduced. His actions and temper kept me on edge and just reading about his interactions with Beth made me want to hate him and actually made me panic. Though the characters were well rounded, I found the foreboding lines kept me wondering what was going to happen next.

There were so many different times when I found myself holding my breath in this book, that I was afraid I would pass out. Once you get to chapter three, it becomes impossible to put down. I quite enjoyed watching Beth and Will get close to each other and found their budding romance (or what I hope will be a romance in the future) to be a nice little treat among all the anxiety ridden mysteries. However, I do wish there was a bit more to that, but can understand why there wasn't too much. After all, would you be focused on romance if you were investigating strange happenings with someone? I know I wouldn't. I quite enjoyed how Beth and Will had a notebook for their investigations. I thought it was cute and, if I am completely honest, a bit odd they would keep such a hard copy of their findings. Things like that are often lost, especially if you aren't careful. It didn't come as a shock it was dropped in a breaking and entering adventure Beth and Connor did. Not that I am for breaking and entering, but I was slightly mad that she went with Connor.

Connor had a temper and on a few occasions before the breaking and entering adventure, we had seen it come out towards Beth. I understand she was scared of him and decided to go with him due to that fear, but I though it was dumb. Even if it helped with the story progression in a way, I found myself thinking Beth was a stupid woman for tagging along and letting herself go with him. I was glad when Will had said the same thing I thought when Beth told him. He seemed very protective of her and that was a pleasant sight to see. Connor was just an odd character and he really seemed like he was an evil one. The way he did things in a sneaky fashion and how he lost his temper often and quickly around Beth, kept me wondering about what he wanted with her. I do have to admit Beth was a weird one too, though.

Beth on and off through out the book, kept having hallucinations, both auditory and visual. It was a concerning mystery through out the book. She had secrets as well, ones that were being hinted on every now and then. I found myself growing anxious to figure her out as well. Even though, it was through her perspective, you couldn't help but wonder what was she seeing and if maybe she wasn't just crazy. Especially since she was having a hard time with the loss of her friendship with Veronica and with her parents being weird. I had chalked it up to, Beth was just under too much stress. It was cleared up at the end of the book, but I felt it could have been delved into a bit more than the few pages it got. I was happy with the way it ended, but I definitely felt there could have been a bit more to it. It wasn't rushed and felt complete, but left a lot to think about and wonder about. It was definitely a good way to start off the series and leave the reader wanting more.
I would recommend this to my paranormal mystery lovers. With the suspense and anxiety ridden sense, I couldn't help but love the book. I would rate it 4 stars out of 5 stars. I rated it this because it was a truly fantastic read, but wish a few things were delved into a bit deeper. I do hope it gets better as we go through the series and can't wait to read more.