The Gifts of Faith – Bouquets and Rainbows (Ch. III)

Shauna's imagination became her best friend as a little girl. As an adult and writer, imagination fuels her creative spirit.

The fragrant scent of Lily of the Valley always takes Faith back to that day 20 years ago when she met the soul of her sister Hope. Thinking back, she knew the day would be memorable when she witnessed a rainbow arcing its way to the earth mere yards from where she stood in her favorite meadow. The events of that day would forever change her life, although she was unaware of it at the time.

Today, Faith Montgomery runs a small flower shop in town. It seemed natural to surround herself with the rainbow of colors, delicate textures and the array of fragrances that had her entranced as a young girl. Faith named her shop Bouquets and Rainbows in commemoration of the day that changed her life so many years ago.

She remembers it as if it were yesterday.

After picking the bouquet of Mama’s favorite flower, Lily of the Valley, Faith and Kitty took their time strolling home. Faith was absorbing what had just transpired in the meadow. Meeting her sister had been magical. No one would believe her, of course, so she relished the memory knowing she would have to keep the experience to herself. She couldn’t even tell Mama and Daddy. They were aware of her ability to see souls, but telling them she’d met Hope would probably bring them sadness. Her parents had been through so much; the last thing she wanted to do was cause them to relive losing their daughter before she had a chance to come into the world.

“Mama? Daddy?” Daddy must be in the barn working on the rocking chair he’s making for the O’Malleys. Mama’s been tired lately. I’ll just put these flowers in a vase and see if she’s napping.

Faith placed the vase in the center of the kitchen table. Immediately, the modest home was filled with the sweet fragrance of Lily of the Valley. While making her way to her parents’ bedroom, Faith’s tummy began to flutter with butterflies. Earlier today, the butterflies brought a miracle into her young life. This time, she was filled with trepidation.

As she entered the room, the floral fragrance from the kitchen became overpowering. Mama looked so peaceful resting on the canopy bed with its white eyelet bedspread. But something was wrong. It took a few minutes for Faith to figure it out. Then she saw it – or didn’t see it. She could no longer see Mama’s soul! No! she screamed inwardly. Moving toward the head of the bed, Faith noticed a faint rainbow shimmering through the window, taking a stance above Mama’s pillows.

Mama was gone from this world. Faith paused to reflect on the moment in the meadow when Hope appeared to her. It was now clear why she chose this day to come into Faith’s life. Hope was the angel chosen to bring Mama to God, whom she so loved.

Faith remembered Hope’s words: As you know, my name is Hope. What you don’t know is I was the child that Mom and Dad never knew. I was stillborn; however, a part of my soul lingered in the womb. Mom and Dad grieved, but God has a special assignment for me.

As Faith leaned over to kiss her mother’s cheek, the rainbow brightened and remained hovered over Mama, as if to say, It’s ok. I’ll stay here. You go find Daddy.

Faith could barely make her way to the barn as tears flooded her eyes and stung her cheeks. The butterflies had ceased, only to be replaced by a vice wrenching her heart.

Her grief was too heavy to allow another step. Faith stood in the doorway of the barn sobbing. “Oh, Da-a-a-d-dy! M-m-m-mama’s g-g-gone!”

The Town in Which This Fictional Family Lives 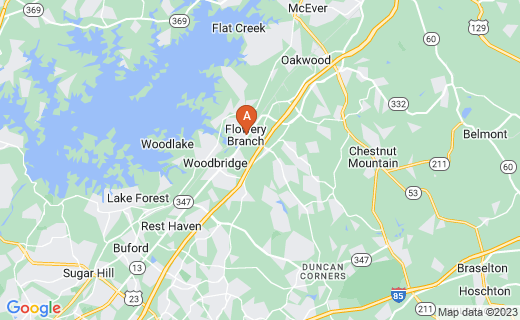 Faith's town has about 5,600 residents

The Next Few Years

Life without Mama was hard for both of them. Daddy kept himself busy with his hand-crafted woodwork. Hal Montgomery was known throughout the state of Georgia for his handiwork; he always had plenty to keep his mind off his broken heart. And then there was Faith. She was only 6 when she lost her mother. Faith spent as much time as she could with Daddy, but the meadows and fields were where she felt the most comfortable. She and Kitty spent most of their days identifying flowers, listening to the birds sing their songs of joy and marveling at God’s rays streaking through the heaven-reaching boughs of the trees. Her heart was calm when she was with God and Mother Nature.

Faith made it through school without any friends until the Barnes’ moved to town. Sarah was new to the school and wasn’t readily accepted. Most of the residents had been in Flowery Branch all their lives. People were born there; they didn’t move there. Sarah and Faith were both outcasts and soon became best friends. They told each other their deepest secrets. Having a real friend was something neither had ever had before; Sarah because her family moved a lot and Faith because – well, Faith could see souls and that scared the bejeezus out of the townsfolk. But it didn’t scare Sarah. In fact, she thought it was downright cool!

Sarah and Faith shared their dreams and together, they set a plan. Faith knew she wanted to open a flower shop when she grew up. Her mom had loved flowers so, and Faith embraced that passion. Sarah was always willing to lend a helping hand and shared in Faith's love of Mother Nature and all She has to offer.

The pair worked hard every day after school and on weekends planting bulbs, propagating seeds, talking cheerily and singing to their rows of beauty. They began selling their beautiful flowers at local farmers’ markets, church sales and school benefits. All of their profits went into a savings account they called “The Dream Machine”. They had a vision and they were determined to make it happen.

“I don’t know. Maybe we’re spending so much time with our gardens that I have separated myself from Mankind. And I don’t mean to be funny. I know there’s a reason for it. I just don’t know what it is just yet.”

“Maybe that’s exactly what it is, Faith. We’re on a mission and it’s not yet come to fruition. Our focus is on your dream. Maybe not seeing souls is a sign that your talents are needed elsewhere or maybe you haven’t yet discovered the purpose of your gift.”

“Yeah, I think you may be right on both counts.”

The bell above the door of Bouquets and Rainbows tinkled, jarring Faith out of her daydreaming, bringing her back to today. As the patron came through the door, Faith saw the first soul she’d seen in years. And it wasn’t pretty.

If You're New to This Story, Here's How You Can Catch up

The Gifts of Faith

The ache in her joints was enough to foretell the impending weather. As if to validate her premonition, the smell of rich earth was emanating from the air. Rain was soon to come - and with a vengeance. Faith always seemed to prepare but never knew what to expect. She didn’t know why, but her ‘feelings’ never proved to be misgivings.

The Gifts of Faith - The Rainbow (Ch. II)

As the colors became more brilliant, the yellow hues seemed to separate from the rainbow, reaching to the earth in a gentle golden rain. Even Kitty stopped chasing butterflies as the earth-bound rainbow shower changed from gold to white then gold again before settling in the meadow just ahead.