The Haggis - An Endangered Scottish Species

As winter approaches, a crime against Scottish wildlife looms. From 30th November (St. Andrews Day) to 25th January (Robert Burns birthday), a small, defenceless furry creature is chased and killed to provide the Scots with their traditional feast.

The Haggis Ready for Carving

"To A Haggis" by Robbie Burns - 3rd Verse

Robbie, or Rabbie, Burns, wrote his famous "Address to a Haggis" after enjoying a gourmet meal of haggis, neeps and tatties (turnips and potatoes). Why he decided to address the haggis, which was not only deceased but digested, is not explained. However, here is the third verse for your enjoyment:

His knife see rustic-labour dight,
An cut you up wi' ready slight,
Trenching your gushing entrails bright Like onie ditch;
And then, O what a glorious sight,
Warm-reekin, rich.

Be honest - did you understand a word of that?

The creature in question is of course, the haggis. The entire world haggis population is native to Scotland and has long been subjected to systematic abuse. Every year hunts take place on the birthday of Robbie Burns, a Scottish poet who wrote poems incomprehensible to anyone who isn’t Scottish, and who was a notable abuser of the poor, wee, innocent haggi. (Haggi is of course the plural of the Latin haggis).

In these hunts, groups of Scottish hunters, many in kilts and wearing strange hats, lead the rabble and direct the hounds - mainly Cairn terriors and Scotties - in the blood-thirsty pursuit of one of the most gentle creatures on the planet. Indeed, it is now claimed by some naturalists, including the highly respected David Attenborough, that the haggis has become an endangered species.

Sadly, the world knows so little about the haggis. A distant relative of the platypus, it is assumed to be nocturnal, as it is rarely seen in the daylight hours, but in fact, it is simply shy, and will run or roll into its haggi-hole when its sensitive ears sense the approach of humans. These vicious hunters with their baying haggis hounds will trample on the haggi's nesting areas, hacking at the ground with long sticks to frighten them from their hiding places.

The haggis is commonly said to have legs longer on one side than on the other and this enables them to walk around on the slopes of the Scottish hills. Some people believe there are two distinct species, one with shorter legs on the left and the other with shorter legs on the right. One can go only clockwise and the other can go only counter-clockwise. The two species cannot interbreed as it is physically impossible for them to mate – they just fall over.

Whether this bizarre physical feature is real, however, I have serious doubts. I suspect it is someone's idea of a joke. It seems to me more likely that the animal is simply rather ungainly when trying to move at speed. Its eyesight is poor as it spends a lot of its time underground, digging for neeps and tatties (turnips and potatoes) which are its main source of nourishment. When pursued, it will often curl up into a ball and roll down the hills to escape. Haggi are of course vulnerable when rolling, and perhaps because of this the species became extinct in most countries. However, they had no natural predators in Scotland until man came along. (Eagles and wolves didn’t like the taste.) Startled out of their haggi-holes by the hunters and hounds, the haggi instinctively begin to roll down the hills. To the hounds, this is nothing more than a fun game of fetch.

In recent years, animal activists have tried to disrupt the hunts. They have blown trumpets on the hills early in the morning, to get each haggis to roll out of its hole. At the bottom of the hill, they are collected in baskets and kept safe until the disappointed hunters have gone off to the pub to drown their sorrows. They also put up posters and stakes, with anti-hunt messages, hoping to discourage those who perhaps are not committed to this cruel sport.

Of course, the died-in-the-wool haggis hunters don't take this lying down. There have been a number of skirmishes and the police have been obliged to attend.

In fact, there are two distinct species of haggis. Closely related to the better-known Highland haggis is the ultra-reclusive moorland haggis. This has a smaller, rounder body and a beakish mouth like its platypus ancestors. It is not eaten, because it tastes even worse than its Highland cousin, but is sometimes hunted for its fur, which is used to make hats. It is so hard to spot that no photograph of it exists, but the picture shows a painting made by a Scottish man who caught a fleeting glimpse of one when staggering home across the moors after a night at a nearby alehouse.

In even greater danger is the white haggis, a rare genetic mutation, which is hunted for its silky hair, used to cover sporrans, which are a kind of wallet that hangs in front of a Scotman’s kilt. Scotsmen have worn the kilt for centuries, and its origins are obscure, but some say they began wearing it when they discovered there was free admission for women to the football game.

The Cry of the Haggis

Apart from those two months of the year, the haggi live in quiet contentment. The only problem they have is that, in good summers, when their staple food of tatties and neeps is plentiful, they often grow too fat for their haggi-holes, and get stuck. When this happens, their mournful cry can be heard across the hills and lochs, and a Scotsman will cross himself – which is strange, as they aren’t usually Catholics – and shout to warn others, “Och aye, the haggi cry!” It is believed to be an ominous sign, a forewarning of a danger to Scotland, or at least a rise in the price of beer. Scholars now believe that the cry of the banshee in Ireland was really the cry of haggi who had been brought over from Scotland and got stuck in the Irish bogs, where they would wallow helplessly for days, fruitlessly flailing their little legs.

The traditional Scottish musical instrument, the bagpipes, was very obviously inspired by both the shape and the sound of the Highland haggis. The bagpipers would walk behind soldiers marching to war: this quelled any urge they might have to turn and come back. However, it is now known that haggi themselves were originally used for the same purpose. They would be captured and held, squeezed or placed in a tight hole, so their baleful cries would ring out.

They were also used on the battlefield, to send cries across to the enemy army, who were often the English. The English are known to be very superstitious and believe in ghosts and demons, and at hearing the horrendous howl of the haggi they would often turn and run, clutching their bowler hats. Eventually, a man called Jock MacBaggus invented a musical instrument which made almost the same sound. A pipe band would march in front of an army unit, and nine times out of ten the enemy forces would retreat, holding their ears.

The Fate of the Highland Haggis

There are some websites, set up by hunt fanatics, which try to persuade people that a haggis as sold for human consumption is nothing more than a sheep's lungs, liver and kidneys, chopped up, mixed with oatmeal and sewn up inside a sheep's stomach. This attempt to hide the truth of the abuse of the Highland haggis is doomed to fail - it is surely impossible for anyone with any sense to believe that people would choose to dine on such a disgusting mixture. How gullible do they think people are? 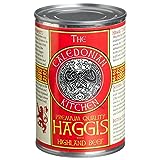