The Second Floor Part One

Mary has loved writing ever since she was a young child, writing and reading have helped Mary through some very hard times in her life.

Mara Adams was a very alluring young woman, she had a perfect hourglass figure, long black hair, and sky blue eyes, unfortunately, the outside was the only thing beautiful about this devious creature. Mara had spent most of her life stealing and being deceitful, all in the name of vanity and greed. She used everybody who ever had the unfortunate chance to be in her life, including her own parents. Her beauty was her choice of weapon.

Mara grew up very privileged, her family was extremely wealthy. Her beautiful mother Jolie Adams was a very famous Opera singer, and her extremely handsome father John Adams was the CEO of a very prestigious clothing company. Mara also had a younger sister named Charisma Adams. The Adams lived very decadent lives, they had two maids, a cook, a nanny, they even had a chauffeur. Mara had almost everything she wanted in life, and whatever she didn't have, she somehow found a way to blame that on her little sister.

Mara despised her younger sister, she loathed Charisma with a passion. Mara had tortured the young girl relentlessly as a child. Even lowering the sides of her crib a few times, when she started to walk, in hopes she would plummet to her death on the floor. Mara even tried to drown Charisma at one point; thankfully the nannies were watching the young girls closely that day. Mara had made Charisma's life a horrible, dreadful nightmare.

The torturing continued as the girls got older, becoming progressively more aggressive and spiteful. As beautiful as Mara was, Charisma was even prettier, both of the girls had their mother's beautiful figure, but Charisma had her father gorgeous, blond curly locks, she had a very ethereal type of beauty. This, of course, made Mara hate the young girl even more, she was green with envy. Charisma had told her parents several times in the past about her sister's abrasive, and crude behavior, but her parents always told her to ignore her, and that sisters will be sisters. If only her parents would have listened to Charisma, Mara was about to take her hatred for her younger sister, into her own greedy, evil hands.

One cold morning around noon, everything changed forever in the Adams house. Thanks to Mara and her cold, black heart. Mara wrote a contrived letter talking about how much she hated her life and wanted to die, but the letter was written as if Charisma had written it. She then went upstairs to Charisma's bedroom on the second floor of the Adam's huge four story mansion with very malicious intentions that morning. Mara tiptoed into Charisma's room and stood over the young girl, being careful not to wake her. She quietly placed the note on her sister's dresser, next to one of Charisma's lovely hairpins. Which Mara knew were soon going to be all hers, then told Charisma to wake up.

Mara looked at Charisma with an evil stare and told her she was going to die today. Charisma kind of "giggled" she knew Mara was mean, but surely she wouldn't kill her. Mara looked at Charisma's beautiful face and assured her once more, that today would be the last day of her life. This time Mara scared her so much, Charisma tumbled out of her bed, onto the floor, then darted from the room screaming. Had it been any other morning everyone would have heard her, but the only two people in the house that day was Mara and Charisma.

Charisma ran downstairs grabbing the phone at the bottom of the stairs, only to her dead air, Mara had cut the cord to every phone in the house. Charisma began screaming at Mara, "Mara why do you hate me so much, I have never done anything to you, but try to love you." Mara screamed "of course you have done something to me, you were born." Mara had everything planned, she had been planning Charisma's murder for months. There was nobody but Charisma and Mara in the house. No way for Charisma to call anyone, all the doors and windows were double bolted, Mara had Charisma trapped.

Charisma had hidden in just about every crevice of the Adam's huge mansion. The only place left to hide was the tiny broom closet hid beneath the stairs. Charisma ran into the closet, locked the door and hid behind one of the shelves, throwing an old towel over her head. While she was hiding Mara was finishing the final touches to her sinister plan. She grabbed a bottle of vodka out of the wine cabinet and dropped a whole bottle of her father's sleeping medication into it. She was going to poison her sister in an attempt to make her death look like a suicide.

Mara started searching for her sister, screaming obscenities at her, Mara called her everything but her name. She even begin chanting "you can run, but she couldn't hide." Eventually, Mara reached the broom closet, Charisma had hoped she wouldn't try to open the door, but she did. Once Mara realized the door was locked the fight was pretty much over, Charisma knew Mara had a key to every room in the house, just like she did.

Mara unlocked the door and begin searching through the small broom closet, it wasn't long before she spotted Charisma. Mara grabbed Charisma's arm, pulled her out from behind the shelf, and pushed her to the floor. Charisma wasn't very hesitate at this point, she was so tired of running, so she didn't want to fight Mara. Charisma thought that maybe if she cooperated, maybe she could talk some sense into her sister.

Charisma looked up at her sister and begin trying told Mara she was willing to cooperate. Mara gave an evil laugh, and told Charisma to go to the kitchen, she then tied Charisma to one of the kitchen chairs, bound her hands behind her back, and began to repeatedly throw insult, after insult at her. Mara poured some of the vodka she had laced with medicine into a glass and told Charisma to drink it. Charisma refused and tried talking to Mara, Charisma thought that by talking to her sister about what few good times they did have together, it would soften her heart.

Charisma couldn't have been more wrong, Mara flew into a furious rage, and forcefully opened Charisma's mouth and forced glass after glass of the tainted liquid down her sister's throat. Mara then helped her stumbling sister back up to her room and waited for Charisma to die. Charisma sensing she was about to take her last breath began singing, Green Sleeves, which was the song her Mother had always sung to her as a small child, Charisma sang until her last breath had left her body.

Mara couldn't believe it, Charisma was finally gone, Mara's dark heart was too black to be anything but blissful, in her eyes she was now, an only child which meant more money, and to Mara, money meant more than family. She cleaned up the mess that was caused by the little tussle, replaced all the cords on the phones, and waited for her parents to come home. 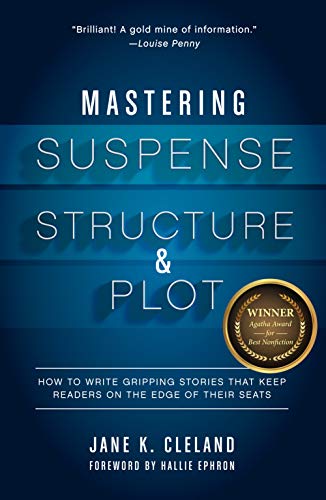 Mastering Suspense, Structure, and Plot: How to Write Gripping Stories That Keep Readers on the Edge of Their Seats
Buy Now