The Man Who Broke Into Auschwitz-Is this a true story?

The man who broke into Auschwitz- Denis Avey

Flicking through the TV channels one morning I chanced upon a fascinating interview with Denis Avey who was promoting his book, "The man who broke into Auschwitz". On the breakfast TV sofa sat an elderly man telling his story of the war which was fascinating and riveted me to the spot. I immediately ordered a copy of his book to enjoy reading during my annual holiday.

Auschwitz was the chilling factory of death in Southern Poland where many Jews met their deaths, most women and children on arrival, along with the elderly and men later when they had been worked out.

Auschwitz- No one wanted to listen

In his interview and in his book Denis Avey says that after the war when he tried to talk about his experiences, "no one wanted to listen". As timed passed people started to listen and in 2010 he was awared a medal "In Service of Humanity" by the Prime Minister, Gordon Brown.Now his story, like the stories of countless others, could be told. Nicholas Avey has been honoured as one of 27 "British Heroes of the Holocaust", with only he and Sir Nicholas Winton, still alive at the time of writing.

Rifleman Denis Avey enlisted in October 1939 into the British army and after basic training was shipped out from Liverpool with no idea of where he was going. Arriving in Cairo he joined British reinforcements to fight against Mussolini's army. After a brave campaign and sickness with malaria and sand fly sickness Avey was posted to South Africa and enjoyed a few months recharging his battery, but he felt a personal need to get back into battle. Avey returned to duty and saw further action in Egypt but was taken prisoner. Avey spent a colourful period as a prisoner, escaping more than once and surviving a near shipwreck. Eventually, after proving such a difficult prisoner Avey found himself in a German Work camp for allied prisoners, near Auschwitz. 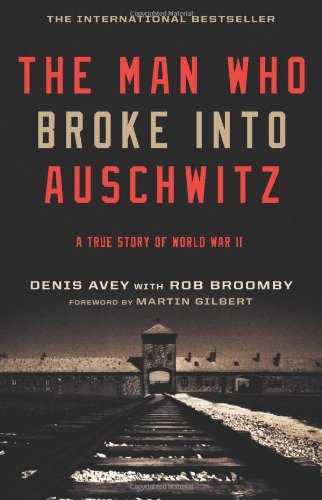 Avey is clear in his description that the conditions in the Allied work camp were far superior to those of the nearby Jewish camp, although most readers would not comprehend how they survived in such bad conditions on meagre rations. Avey describes how he made a friendship with a young polish jew and took actions which ultimately saved his life. He also describes how he felt a need to find out what was happening in the Jewish camp. He had seen the treatment of the Jews in the work camp and the brutality and sudden death shown to workers- who were quite literally worked to death. A friendship developed with another Jew and Avey managed to change identity with him and go into the camp, spending the night there and seeing their food and conditions.

As the war was coming to an end , both the Allied prisoners and the Jewish workers were taken out of the camp and forced to march in freezing conditions with no protective clothing and only what they could forage for food. Avey escaped and made his way to Allied lines, returning home to England and safety. He had a good career after the war and now lives quietly with his wife. Please read this book if you can. I cannot explain why a group of men could be so sub human and why so many were killed, but it is a sobering book- with sadness and joy.

You may need to turn the volumne up on this