The Mitford Girls: The Biography of an Eccentric English Family

Girls of a wilful nature.

Reading The Mitford Girls by Mary S Lovell has been an interesting experience that has left me reassured that I do not come from a disfunctional family background and that my relationship with my sibling is not only normal, it's even benign.

This book, though relatively deferential to a family of minor English aristocracy, leaves one wondering how they all survived the casual treachery with which they all treated one another.

David Freeman Mitford, the 2nd Lord Redesdale (Farve to his children) married Sydney Bowles, a cool and remarkably practical young woman with an exaggeratedly turned down mouth, which made her look unhappy, even though she seems to have been able to enjoy a laugh as much as anyone. They produced six daughters, Nancy, Pam (Woman), Diana, Unity (Bobo), Jessica (Decca) and Deborah (Debo) and one son, Tom.

The children referred to Sydney as 'Muv' and accused her, in their later life, of bringing them up in a sort of distant, hands-off way. Despite this being the norm amongst English gentry in those days, when nannies were employed to take on the burden of the actual rearing of the children produced by the upper classes, the girls still regarded this as a spectacular shortcoming in their mother and it may account somewhat for their abiding love of their nanny, Nanny Blor.

The son, Tom, was educated at Eton before going on to Berlin University to read law and despite having had a homosexual relationship at Eton he later found women much more congenial. Although the girls unanimously loved their brother, his education became a pivotal argument in the family.

Most of the girls had no or little formal education and they objected, constantly, vociferously and even into old age, about the fact that it was thought unnecessary for them to be properly educated. Like most young gentlewomen of the time they were regarded as husband-fodder and they were supposed to marry well, i.e. into monied members of their own class. This did not sit at all well with the wilful Mitford girls. 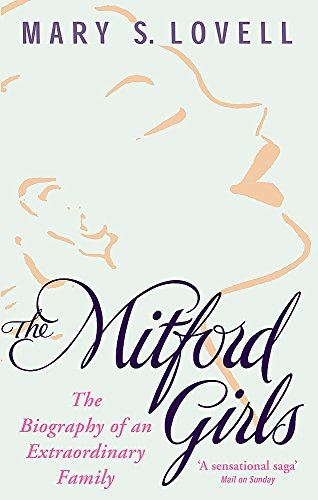 The Mitford Girls: The Biography of an Extraordinary Family
This is probably the best book for getting close to the true eccentricity of the Mitford sisters and is worth reading to get an authentic flavour of the mores of British minor aristocracy. The author was allowed access to personal papers and their extensive correspondence on a scale previously unknown for any of their biographers.
Buy Now

Parting of the ways.

It could be argued that this lack of formal education had more of a hand in shaping them into the extraordinary and eccentric personalities they were later to become than any moulding by traditional teaching could ever have achieved. They were not only lively as children, they were almost impossibly bright with the exception of Pam, maybe, but this may only have been because she was probably less of a self-publicist than the others were and hid her light under a bushel.

So, in time, this rowdy, boisterous family with its penchant for nicknames, secret languages, unusual pets and 'running-away' funds grew up into a family apparently at war with itself but still committed to constant, often snipey, correspondence between its members.

Nancy became a famous writer with a talent for the witty, but usually barbed, comment, Pam took quietly to farming, Diana made a celebrity marriage into the Guinness family, Unity became a Fascist, Nazi sympathiser and rabid anti-Semite who slavishly stalked Hitler until he noticed her, Decca became a communist and eloped whilst underage with a nephew of Winston Churchill, to fight Fascists in the Spanish civil war and Debo quietly grew up on her own until she married the future Duke of Devonshire.

Honestly, you couldn't make it up, could you? If you put this all in a work of fiction you would be accused of being far-fetched. But these were only the starting positions.

Despite the close confinement of their early upbringing such was the strength of their later diverse and passionately held beliefs that great rifts occurred between the sisters; rifts that in some cases were never healed, even by death. Diana, the celebrated society beauty committed the ultimate indiscretion and fell in love with Sir Oswald Mosley, a famous British Fascist politician of the 1930's and left her husband to live with him.

Such a polarisation of beliefs in one family led to irreconcilable differences between Decca, whose Communist ideals had bizarrely and dangerously led her to America during the McCarthy era, and the pro-Nazi's in the family, Muv, Unity, Diana and Tom. They had taken tea with Hitler and found him to be gentlemanly and thoughtful and because of their blinkered opinions formed of him at that time, just before the 2nd World War, they would never admit to his later villainy.

Controversially, they even held to the belief that Winston Churchill was the warmonger who had plunged the country into war. This stance of course made them much disliked by the British public, especially Unity, Diana and Mosley.

Unity, however, was unaware of the public's dislike of her after the war for as soon as war had been declared she had walked into a German park and shot herself in the head. Miraculously, despite the bullet passing through her brain she lived and was nursed in a German hospital until she was well enough to travel back to Britain, courtesy of Hitler who seems to have genuinely cared about her. She was left mentally impaired and lived the rest of her short life being taken care of by her mother who had finally separated from their father after all those years of marriage.

On the surface of it it seemed an amicable arrangement as Muv could perhaps no longer tolerate Farv's well known irascibility and Farv could not bear Muv's dedication to 'the filthy hun' as he termed the Germans. It seemed a sad and wasteful way to end a marriage and the 2nd Lord Redesdale comes across as a tragic figure in his last, lonely days.

Nancy for the most part had watched it all from the sidelines and after the war she left her serial seducer of a husband and went to live in France were she had a long-standing and ultimately unhappy relationship with de Gaulle's aide, Gaston Palewski. She wrote many witty and amusing novels which she shamelessly peopled with caricatures of her family and friends.

Decca, too, was not above using the family as the subject for some of her books though both of them wrote with exaggeration of their own, possibly flawed, remembrances rather than the truth. Even Diana and Debo went on to write books. Diana, loyal as ever to Mosley and his beliefs, wrote to explain what he had really meant and Debo wrote in support of Chatsworth, the stately home she and the Duke saved from ruin.

Deborah is the youngest, and only surviving Mitford girl, and as a shrewd businesswoman she continues to run the Chatsworth estate with her husband.

At the end of it all, and despite the gush of 'darlings' and loving nicknames, despite the lavish sentiments and witty bon mots and banter of all the recorded correspondence quoted in this book I came away from it not only aware of an unusual and complex family but also bemused by one that seemed to turn on one another with absolutely no compunction.

Each was, for the most part, so fixated on themselves that they seemed totally incapable of admitting they could ever be wrong about the past and one wonders if they did ever, could ever, say sorry to each other, even in private, even at the end of their lives.