A Readable and Well-Crafted Book: The Roots of Blitzerkrieg: Hans von Seeckt and German Military Reform

A popular mythology has grown up concerning German military forces in the Second World War which A) Emphasizes the role above all else of German armored and aircraft forces in lightning war victories at the beginning of the war and B)Credits this to a few military thinkers like Guderian or Rommel. While doubtless there were important elements that these men brought to the forefront, it is the contention of James S. Corum in his book "The Roots of Blitzerkrieg: Hans von Seeckt and German Military Reform" that the crucial developments that paved the way for bliterkrieg were actually products of the 1920s and in particular the able leadership of Hans von Seeckt. It makes for an authoritative book which does much to look at the German military of the period.

Chapter 1 of the book is "The Lessons of World War I," which paints a generally positive picture of the Germans, as having fought against great odds and given more than they took on land and in the air, but that nevertheless the Germans recognized that they would have to dramatically change their conception of war for the next conflict - above all else in regards to their conception of technology. Their extensive effort in regards to superior training would have to be applied to reforming the army for the future.

Chapter 2, "Von Seeckt and Rethinking Warfare," looks at the Germans and their efforts to reconstruct the army after the chaos of the First World War, under the general staff leader Hans von Seeckt. An accomplished general at the end of the war in many campaigns, he wished to build up a professional army focused on mobile, offensive war, in close coordination with airpower. He would have great influence in holding together the German general staff, establishing training, and reorganizing the army. In dramatic distinction from other post-Great War armies, the German one would be highly professional, mobile, and offensive.

"Debate within the Reichswehr" the third chapter, concerns the polemics which existed concerning what doctrine would be appropriate for the German army - defensive schools more akin to France with massive reservist armies, an ill-defined psychological school that stressed focus on the psychological element of war, and mass mobilization and popular resistance. Von Seeckt's focus on a professional and offensive army ultimately persevered.

This model of war depended above all else on training, as is outlined in Chapter 4, "Training the Reichswehr", showing how a new focus on a professionalized army and volunteer force led to a dramatically changed existence for army soldiers, who were intended to be highly educated and professional units that the army could quickly expand from once Versaille's limitations were overturned. Major focus was put on education and extensive training in many subjects for all soldiers, with high standards for soldiers, NCOs, and officers. In particular general staff officers retained their high status and prestige and were expected to pass extremely rigorous exams: the Germans used the small size of the army to ensure only the best and brightest joined. To some extent they did so too much for their high command, limiting their potential for expansion of the general staff in the 1930s during rearmament.

"Developing Modern Weaponry" is the title of chapter 5, showing how the Germans thought that their problem in the First World War was a failure to grasp new weapons technology, and how they aimed to acquire modern weapons fully. This was despite Versailles restrictions on the German army that ostensibly forbid this: the Germans simply developed their weapons in secret, working to keep Allied control commissions in the dark. They set about developing new poison gas, thinking about new infantry rifles, dramatically improved radio communications, infantry guns and artillery, and in cooperation with testing in the Soviet Union build a large number of armored vehicle prototypes. The failings came with regular motor vehicles, where a failure to approach them on a commercial basis and too much focus on specialization prevented the motorization program from succeeding.

Chapter six is a topic of great importance given the beginning of the Second World War, being "The Development of German Armored Doctrine," which shows some of the German experiences with armored units in the First World War - heavily impacted by armored cars and mobile operations on the Eastern Front. This led to a focus on mobile warfare with armored cars and light tanks, as well as heavy tanks for breakthrough. Their war-time experience also gave them exceptionally good understanding of anti-tank warfare. The Germans also looked extensively at what the British and French were doing but were less than impressed: the claims that they copied their tank ideas from Britain are false, and certain famous figures like Guderian have been over-estimated among the Germans compared to other theorists.

The other famous side of German forces in the beginning of the Second World War is shown in Chapter Seven "Developing a Reichswehr Air Doctrine", which again looked at how the Germans analyzed their lessons from the war, training, and cooperation with the USSR. Above all it points out that the German air force was intended above all else to be a tactical, rather than strategic one. In the absence of a formal air force, civil aviation was heavily militarized to enable it to build the nucleus of a later air force. Careful cooperation with the army was undertaken and there was much focus on technological development, while the Germans put effort into establishing air general staffs.

A final chapter, chapter 8, "The Reichswehr as a Mature Military Force", looks at what the Reichswehr hoped to do with their newly formed military: they both had provisional plans for conflict with their neighbors, mostly focusing on defense, and more importantly extensive plans for what their long-term expansion would be if Versailles limitations were removed. Furthermore they put extensive effort into building up matériel reserves and reserves, although the latter was not wholly successful. So too, the Germans began to hold major military exercises once more, reviving their pre-war tradition.

The epilogue, chapter 9, restates the the thesis that von Seeckt's army would be crucial to the quick build up of German forces under Nazi Germany, and providing the high quality of combined arms forces and operational art displayed during the beginning years of the war. A massive focus on training made battlefield success possible. It would be von Seeck's ideas that enabled the Germans to fight as long and as effectively as they did.

The book ends upon a number of tables of organization of German divisions, cavalry, infantry, and motorized, and the final bibliography and citations.

The book is supposed to be about Hans von Seeckt, the German chief of staff who led the German military during the 1920s, laying many of the basic doctrines, concepts, the organization and the culture of the German army in preparation for another World War. It does however, tend to quickly have very little to do with Seeckt, who after the beginning with talk over various different personalities and different opinions for the army, fades into the background. Replacing him is the general nature of developments in the German military in the 1920s. This is to me more interesting than a single individual, but regardless it does belie the title. It proves along the way the thesis of the book: that German armored warfare doctrine in WW2, popularly known as blitzerkrieg, did not come from Guderian or Rommel, but from Hans von Seeckt and his contemporaries who laid the foundation of the German military in the 1940s long before in the 1920s.

Nevertheless, the content within makes up for it. In its limited expanse, the volume is sweeping, looking at the reorganization of the army's divisions, changes in doctrine, discussing why the Germans adopted offensive doctrine after the bloodbath of the First World War seemed to show the primacy of the offense, air warfare, motorized and armored warfare, equipment, procurement, training, organization - a whole host of different topics. In doing so it critically examines what other authors have propounded and offers effective refutations: in response to the idea that the German military's aristocratic culture was the principal reason behind the adoption of the offensive mindset after the war is the reply that the Germans conscientiously considered exactly the lessons of the war and decided upon their offensive doctrine, and concerning the idea of British armored theorists and Guderian being the principal driving forces behind armored warfare development is provided a detailed account of the development of armored doctrine.

Furthermore the book is to be commended for being rather easy to read, while still providing plentiful detail, that its points are easy to grasp, and that it is cohesive and fits together well. This is a book which both the amateur and the expert can understand and be poised to learn something from: Corum has accomplished his task very well indeed in crafting such a well-constructed book.

Overall if one has interest in the German military during the run-up or during the Second World War it makes for an interesting book - albeit a highly specialized one. As the author notes, most of the material which has been written about the German military in the Interwar period has tended to be of political nature, trying to determine what led the German military to be of such doubtful loyalty to the German Republic and why it supported the Nazis in the end. There is less about developments in actual military thought in the 1920s, which is above all else the focus of this volume. But it does make it so that if one wants a look at the broader relationship between the military, state, and society, in the 1920s, that this volume is not one to look for: its role is consigned to purely military affairs.

4 stars for The Roots of Blitzerkrieg 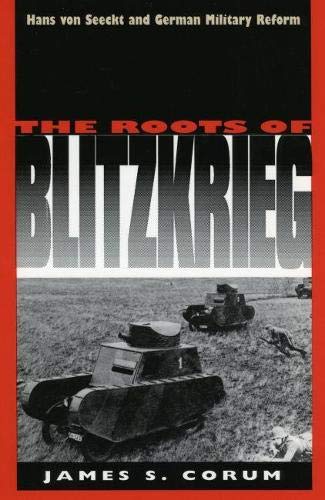