The Wee Free Men, by Terry Pratchett -- A Book Review 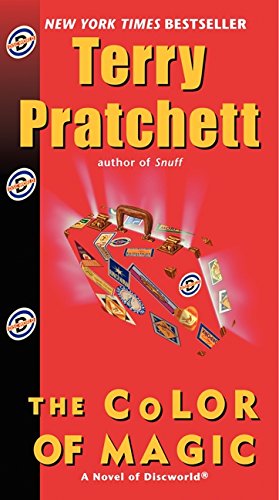 They say a witch needs to grow up on hard ground to be any good at what she does. Imagine the surprise of Miss Tick, a proper mountain witch, when she discovers that there is a witch living on The Chalk who is supposed to be in charge of a collision between two worlds. Curious, Miss Tick seeks out the mystery witch and finds a young girl, Tiffany Aching, who doesn’t even know that she is a witch. Tiffany has already had some run-ins with this other, darker world and has prevailed through simple good sense, but now she has to be able to enter that world and bring her stolen baby brother back without allowing the denizens of that world to spill into hers. To add to the mystery around the girl, she has the respect and even fear of the Nac Mac Feegle. This fearsome – and distinctly Celtic – race is generally avoided by everyone, with good reason…even though these blue-skinned men are only six inches tall.

With the help of the Nac Mac Feegle, Tiffany slowly becomes aware of her abilities – as well as ways she can get help with her chores – and strives to fight in an otherworld of dreams and strange monsters. Above all, there is a selfish and immature queen who steals babies and gives them everything they want and nothing else, so Tiffany must find her brother before he suffers permanent damage from being fed nothing but candy.

While this is purportedly a Discworld book, there is really nothing in it to show that it is supposed to be in the same tradition as Thief of Time, Night Watch, Going Postal and all the other favorites. Granted, this is supposed to be aimed at a younger audience than those other Discworld books, but is it really necessary to cut out all of the distinctive satire and political humor of the rest of the series? Throughout this book I had to continually remind myself that I was reading Terry Pratchett as this particular book reminds me of nothing more than some of the less-popular Piers Anthony books about Xanth, though without all the puns.

Pratchett’s writing has always been distinctive for its detailed characters and well-developed story, always with some kind of historical background and satire liberally portioned out through the entire story. The Wee Free Men was entertaining, though only mildly, and had none of the substance of those other books.

This is a very quick read that will likely take even the slowest readers less than a weekend to finish, and is an excellent empty-headed book to relax with. If you want any of the thought-provoking satire or laugh-out-loud humor that Pratchett is known for you will come away disappointed.

Overall this is far from the author’s best work, and in fact appears to be more a supplement to his existing income than any inspired literary work. The story is relatively flat and dull, and while some of the characters are certainly wacky enough to be worth meeting this book really isn’t worth going out of the way for.