"The Woman Who Walked Into Doors" by Roddy Doyle

Roddy Doyle, an internationally famous writer from Dublin, who won the Booker Prize in 1993 for a novel called "Paddy Clark Ha-Ha-Ha" , wrote a novel called "The Woman Who Walked Into Doors".

For my money, that's the one that should have won the Booker Prize. Roddy Doyle treats this difficult topic with sensitivity, humour, irony, and sympathy for the Woman Who Walked Into Doors.

This woman (Paula Spencer) is a battered wife. She isn't really walking into doors all the time; that's her excuse for the black eyes and split lips she suffers from the beatings her husband delivers. The book is written from her point of view; it's written with her voice, telling her story. I was truly amazed to find out this book was written by a man.

This book is also a social commentary: with featherweight irony, Mr. Doyle shows us why the woman in the case is so determined to keep the secret of her life--the criminal beatings by her husband. This book shows us why the woman doesn't fly--why she stays where she is so mistreated. The answer to that question is quite simple: she has nowhere else to go. If anything moved me about this book, that did. Mr. Doyle conveys to us exactly how trapped this woman is; and how common that is, or was, to have the woman of the household putting up with anything, because her alternatives to being there are just so bleak.

"The Woman Who Walked Into Doors" also shows us why the friends and neighbors, who aren't buying the woman's story that she's naturally clumsy and keeps running into doors, don't do something to help her. The book shows why everyone goes along with the Woman Who Walked Into Doors; why they pacifically accept what they know is a tissue of lies, and conspire with her to protect her abuser. 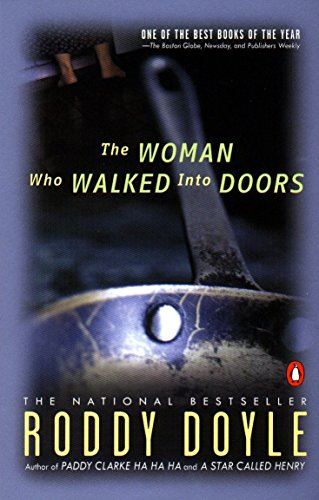 The Woman Who Walked into Doors: A Novel (A Paula Spencer Novel)
Buy Now

Roddy Doyle was born on May 8, 1958 in Dublin, Ireland. Ireland has produced so many great writers and great writing. Mr. Doyle carries on that tradition admirably. His literary voice is a distinctly Irish one--anyone who's read "Angela's Ashes" will recognize that its author, Frank McCourt, and Mr. Doyle hail from the same place geographically. Mr. Doyle grew up in Dublin and graduated from Dublin's University College. He was a teach of English and geography before winning the Booker Prize in 1993, for a book called "Paddy Clark Ha-Ha-Ha". That book established Mr. Doyle as a writer of international repute, and allowed him to retire from teaching and become a full-time writer. The book is about working-class Dublin and a ten-year-old growing up in the late 60's in Dublin.

Mr. Doyle writes humour like no one else. I still crack up in a heap of giggles every time I watch the movie, "The Commitments" or re-read that book. It is so funny, and so true! The Commitments are a little hometown band who decide to invent something called "Dublin soul". "The Commitments" is part of the Barrytown trilogy: a series of three books about working-class Dublin. The next book, "The Snapper", is about a teenage girl who gets pregnant. We follow the continued adventures of the Rabbitte family with this book. And the third book, "The Van" is about what Mr. Rabbitte, Sr., decides to do when he is "made redundant" (became unemployed, for all of us Americans). It's the funniest writing I've ever read: and it also rings true. There is no false note struck in any of Mr. Doyle's writing.

The Woman Who Walked Into Doors made a reprise in 2006. Paula Spencer, The Woman Who Walked Into Doors, comes back to us ten years later. I haven't read that book yet, and just discovered it's been written when doing research for this hub. Oh boy, a new book by a favorite author!! What could be better than that? The title of this book is, "Paula Spencer".