Those who Can’t, Won’t, or Don’t Talk… Write

I haven’t written any new articles for some time now. I’ve been so busy with working on other projects lately, but I forced myself to sit down today and at least get this one started.

This all made me think of something for a topic, and that is that I write quite a lot, I would say. I have several blogs, some of which I write on every day, and others a couple of times a week. This is why my article and fiction writing efforts have suffered: I just don’t have the time! I just exhaust all my energy on them, and so I don’t want to work on any.

But anyway, I digress. For years, practically my entire life, I was always accused of being too quiet; too serious – even on HubPages. And this more often than not made me feel irritated, since I didn’t think there was anything wrong with me! Nothing wrong with me anyway – it’s just how I was made, and I can’t help it.

I’ve always maintained that if there were people I wanted to talked to, then I would, but there were other people who instantly made me think: I don’t want to talk to this idiot, let alone have anything to do with him or her whatsoever.

And those were the people who often, like I said before, accused me of not talking enough and ridiculed me mercilessly.

I was raised to be quiet. In my home growing up, you couldn’t cry, shout, or even let the dog bark – mainly because it upset my dad, who grew up in a time when “children should be seen and not heard”. But I think as I grew older, “I started to come out of my shell”, so to speak, or at least that’s what others said.

Of course, once again, this perplexed me, as I thought that nothing was wrong with me. I would often think: what the hell is wrong with these people? Why is it so important that I talk or don’t talk? It was like a façade of concern, whereas they were really just concerned about making me feel different and inadequate. 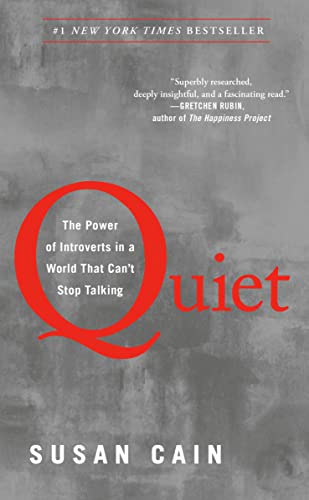 Quiet: The Power of Introverts in a World That Can't Stop Talking
Buy Now

Quiet people are more often than not introverts: people who are concerned with their own thoughts, feelings, and don’t care too much for the outside world and other people. They (probably extroverts) call us selfish. Needless to say, we don’t get along. Because we know when and how to shut up; they don’t, and love the sound of their own voices.

As the years went by though, I discovered the wonders of the internet, and found that not only are there places for us “socially inept” people to go, but we could also have our own place on the net as well – where we can write articles, we can blog - we can even leave scathing comments on forums, too.

Participating in all this is ironically called social bookmarking and social networking. And likely we don’t ever see or speak to these people in our entire lives in person. And yet we may get to learn much more about them from reading and writing than we would otherwise.

I found that blogging and writing gave me a platform, or a pedestal perhaps, where people read what I have to write, if they won’t listen to what I have to say.

That pretty much covers a lot of people like me, who don’t want to talk for whatever reason. Now what about those of us who can’t actually talk?

I was intrigued the other day when I read a piece on Roger Ebert, a film critic among other things, who has cropped up in many an article on the net in my world, as he wrote an article not too long ago saying why video games can never be art. This no doubt made for some debate. But I won’t cover that here.

But I was interested to see that Roger is actually mute. He can’t talk, seeing as he lost the ability to speak years ago due to complications related to thyroid cancer. And yet this man has been able to stir up so much emotion and online conversation over his topics.

I also remember something I read once regarding Marshal Mathers, or Eminem, and how instead of confronting people personally or directly, he’ll deride them behind their backs, and usually in his lyrics which he’ll obviously write, and then voice on the microphone or in his studio. Now, I used to listen to his music years ago as a teen, and wouldn’t really consider myself a big fan of his, but in his own way, when people annoy him, ridicule him, or whatever, this is what he does, and how he gets back at them – and with much vitriol, usually.

Geoffrey Chaucer's character (played by Paul Bettany) in A Knight's Tale said to two loathsome buffoons: "I will eviscerate you in fiction. Every pimple, every character flaw. I was naked for a day; you will be naked for eternity."

And we can all also do the same thing come to think of it. In addition to writing or blogging, we can make podcasts, we can record our own songs, we can upload our own videos to YouTube and so on, where we can get our point across.

So bear in mind the next time you persecute your next quiet, shy, “weak” victim out there, because they may well have a lot to say, and many others will hear it in one way or another. You probably won’t, because it just might not be to your face.

"Yes... it's (talking to myself) the only way I can be assured of intelligent conversation."

Do you talk a lot or not?