Timeless or Clichéd? The Sound of Waves Review

It is a story which has been done time and time again: the young man, on the verge of adulthood, in a village which could really fit, minor details exempted, into any conceivable period of history in the last ten millennia, who falls in love with a girl and ultimately succeeds in his quest for her as he comes of age, despite reluctant parents and suitors. In this, The Sound of Waves’ basic storyline is nothing new or particularly dramatic. At the same time, it is a beautiful, charming, peaceful story and if the characters might be paragons of virtue to excess, but it is reasonably well worth a read.

The innocence of the two principal characters, in effect children, Shinji, the main protaganist, and Hatsue, the girl for whom he falls in love, is one which is marked and forms the critical seed around which the book's story takes place. It is the normal story of awkward teenage love, and in this there are very few turns and plot twists indeed - disapproving parents, still finding a way to see each other, and yet of course, miraculously, ending up together in the end! Shinji, entirely too noble to tell a lie, unsure of himself, Hatsue, the beautiful virtuous young maiden who shyly connects to the young fishing man, and then the two, after no particular real challenges, end up happily together. Characters such as Chiyoko, the "ugly" (although clearly not actually so), student girl who went to Tokyo, who makes mistakes and feels contrition for them, who engages in jealousy and pettiness - these to me constitute far more intriguing souls than the perfect pair of Shinji and Hatsue. Yasuo too, the bully, although a character one grows to dislike and despise, at least has a greater feeling of authenticity and realness about himself for modern eyes. But the distinction for Chiyoko and Yasuo are that they have both been away from the island, to "modern" civilization, in Tokyo or the blossoming metropolises of Japan in the beginning of the Japanese economic boom: by contrast Hatsue and Shinji are largely immune from this, and this must surely be what accounts for their astonishing simplicity, honesty, and virtue - their position in a fisherman society, one not corrupted by the evils and sins of industrial civilization.

It is just another way in which the book balances perilously on the line between being quaint, charming, and peaceful, and falling into by contrast the camp of being clichéd, excessively perfect, and stereotypical. The main characters are altogether too perfect, innocent and virtuous, that they fall slightly flat - even for their native milieu, in a quiet and peaceful Japanese fishing village, they seem to be characters who are perfect to excess, without the natural flaws inevitable to any member of the human race. But is it just because we today are too jaded, too used to conflict, violence, and decadence, to comprehend the product of a society where modern temptations and sins are kept at bay?

If the human element is one which is troubled, the author's prose does, in the simple and direct style which seems to be the trait of Japanese work, convey a sense of calm, peace, and a splendid description of nature which forms a vital backdrop for the canvas of his piece. The title of the book is in this regard very well chosen: the sound of waves. Most of the time peaceful, at the end it culminates in a storm which forms the conclusion to the novel and Shinji overcoming the challenges which faced him. But throughout it manages to tailor the description of the environment and the characters, and in its minamilistic style gives a true feeling for the beauty of the sea and its relationship to the island. The same can be said for its simple yet elegant description of the fisherfolk and their work, ranging from their time on the pearl diving to catching fish. It is perhaps in these moments that the most authentic and genuine feeling comes from Shinji, as he labors in the environment in which he is the most at home.

And thus one arrives to the end of a short work, one which is marked for the most part by the calmness of the seas, even if it is punctuated with storms and cries. It is a type of story which is perhaps only imaginable in the quiet and peaceful place of a Japanese fishing village, during the last decades of their existence before the Japanese economic miracle destroyed a way of life which had lasted for millennia, one marked by an unparalleled degree of innocence, and rustic simplicity. Perhaps it is from this setting that the book redeems itself, for the understanding of its context and milieu into which it places itself, as a timeless story from a timeless place about to be wrenched forth from the unchanging stream of agelessness and transported into the great furnace of modernity and transformation, which to makes it touching rather than simply contrived and cute. Certainly no splendid and earth shattering novel, it is still a decent book, for a look into the time if nothing else.

3 stars for The Sound of Waves 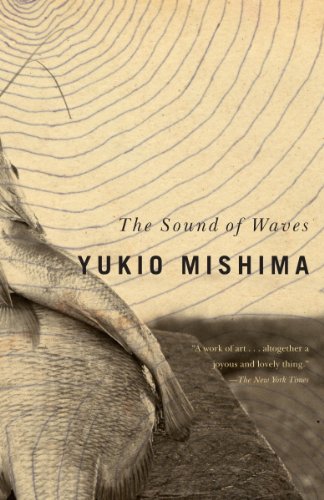