Upon leaving Manila, the capitol of the Philippines, friends - who were also flying out of the International Airport that day - joined me for an early lunch of strange foods before departure. At the restaurant, the waiters spoke little to no English and I was left to mime my order to the waiter, as the others spoke to their own waiters. Pointing at a picture in the menu, I indicated that I wanted a salad with a side of beef covered in gravy. To clarify, I pointed to the meat in the picture and, with each hand on the side of my head, used my index fingers to point up, and began to "moo." Satisfied that I made point, I smiled and nodded and the waiter was off with the order.

A short while later, my friends and I were laughing over stories. While engrossed in conversation, the waiter returned with our meals. A few bites later and I frowned. This beef was unlike any beef I had ever tasted and had a different texture - unlike that of beef. My friend, a native Philipino asked me what was wrong and examined my food. I told him, "I don't like my food. It doesn't taste like beef." To that, my friend answered, "That's because you're eating dog." I just about fell out of my seat, saying, "No, no, no. I ordered beef! Moo! Beef!" Feeling sickened, I picked at my salad until it was time to go.

That's how it is in other countries. The noises we make for our animal sounds are not the same animal sounds people make in other countries for the same animals. The foods we consider strange and unusual - or even horrifying - are normal to other people. People eat these foods out of convenience, custom, or necessity. In my travels, here are some of the strange foods people have eaten in the lands I visited.

Their Usual Foods - Our Unusual Foods

Some strange foods are well-known. For example, it is known by North Americans that, in Asia, people eat dogs and cats. North Americans have a difficult time understanding or accepting this concept. Likewise, in Nepal and India, slaughtering cows is not only taboo but illegal and the concept of killing cattle is as disgusting or sacrilegious to them, as it is normal to North Americans. Unusual food choices to North Americans that are normal in other countries may include rodents, mammals, and creatures of the sea:

Then there are the very unusual off-the-menu choices:

Eating Dog in Vietnam - Sold Live in the Open Market 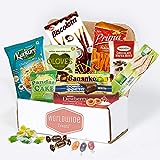 People Eat Scorpions - Here's A Video To Prove It!

Why Do People Choose Usual Food To Eat?

Eating in so many countries has given me a high tolerance for people who eat differently than I do. Even so, the more I see it, the less interested I am in eating meat and bugs. I haven't gone fully vegetarian but I certainly am not the everyday meat eater I once was.

Eating abroad can be an exciting food adventure. But travel as an informed visitor when a guest in a foreign land. People eat strange food because it's normal to them. But the traveler can avoid potential shock at finding something that may have been on the menu - but just not the menu from home!

Did You Find This Article On "Travel and Food - Weird Foods People Eat" Helpful?