View from the Right

In society, there are certain set of ideals and principles which enlightens and justifies how society works and provides a framework on how the political and cultural social order would operate. When it comes to political ideology, it expounds on how power is used and how it is divided among people. When an individual embraces a political ideology, it is often based on the dimensions of how society is perceived to be organized – goal; and the strategies or methodology by which the said goal is to be achieved – methods. With the collection of ideas embodied in an ideology it gives a clearer view of the type of leadership for governance whether it autocratic or democratic or in terms of the economic system if it is a socialist or a capitalist one. Among the known ideologies prevalent were socialism which was intended to support the economic system, there is also the political ideology of communism that was associated with the leadership of Marx and Lenin.

Political ideologies often come with problems; in fact, it has been an elusive element of society because of the controversy that it reflects in categorizing people along the political spectrum. These political ideologies are shaped by an issue or several issues and sometimes inherited or handed on from generation to generation. Another political ideology that could be of interest is liberalism, which intends to protect and enhance the freedom of a person or any individual and keep them from being harmed by others. A political thought originated by John Locke who believed that there is great potential for human progress in a modern civil society and in a capitalist market which could thrive in a society that ensures individual liberty. Jeremy Bentham supported this thought further as he affirmed that under this ideology there is respect for international laws. And Immanuel Kant likewise agreed that the government is also instrumental in establishing peace in society. The three were considered the major influences on the thoughts of liberalism.

According to the prevailing concepts of liberalism the government should promote the freedom of the people rather than just protecting it.

Liberalism as an Ideology

Liberals assert that the primary powers of the government are to promote the freedom of the people and so therefore it is responsible for eliminating the elements that would prevent any individual to live freely and develop to their full potential. Among the obstacles identified that harms individual freedom are poverty, ignorance, discrimination, and disease. Given its western origin, liberalism emphasized more on individuality. If in other culture and in history a person has always been immersed in a clan, ethnic group, tribe, caste system or status, under liberalism individuality is highlighted. An individual is freed from complete compliance to a group or authority. Under liberalism competition whether between political parties or producers in the market is a means to develop social order.

Emerging from the social construct of Plato where society has been perceived to operate like a colony or beehive whereby the members of the group functions according to specific functions attached to their classification or status in society liberalism upholds that competition is essential for the government and society to settle any disagreement through dialogue and learn to compromise. But liberalism is different from democracy, the two may seem alike but in must be understood well that democracy derives its authority from the popular election or choice of leadership while liberalism focuses more on the extent of functions of the government (Girvetz, Ball, Dagger, & Minogue, 1998).

Time and circumstance are important elements of liberalism just like any other political ideology. The way a nation adopts liberalism varies and changes through time. Depending on the status of how power is used and managed by the government, based on its use, abuse and misuse and the willingness of the government to accept corrections, the type of liberalism changes. The rectification of the inequalities resulting economic competition such as the unfair distribution of wealth and the inequities that deprive people to equally live as free individuals are essential in liberalism. With this function the power and responsibility of the government focus on the regulation and restriction of the opportunities that will benefit the consumers and workers. The government utilizes its power to protect the people as well from the hostilities that stops him from realizing his full potential which may include restructuring and reforming the social institutions to address this need. But this is also different from radicalism; the eagerness to welcome the changes is likewise complementary to the acceptance that sometimes change may also result to loss in as much as gain (Girvetz, Ball, Dagger, & Minogue, 1998).

Under liberalism, in order to achieve modernization there are three key elements which are human progress, human reason and cooperation. There exists a mutual interdependence between the government and the people and as division of labor increases in the market so does the international relations is strengthened among nations and thus conflict is reduced.

Human nature is the fundamental factor in building apolitical philosophy. In the concept of human nature, it is either fixed or flexible, for the liberal’s human nature is fixed and has the tendency to either be good or bad. The nature of a person is inherent, developed through biological and cultural factors and there is a supernatural force that rules human behavior and moral conduct. In addition to this, thought the nature of man is fixed, he cannot be presumed to be naturally good or naturally evil. Both natures are present in him and social influences such as family, religion, education and community. As an individual search for opportunities to develop his full potential social influences become crucial to his freedom. If an individual is subjected to authority or a tyrannical form of leadership, he is perceived to be unable to function fully. It is therefore expected that the government will provide him the protection of his rights, to freedom to his property, free trade and enjoy equal protection with other individuals under the law.

Given the universality of human nature there is still a need to acknowledge the individual differences and if the government is to protect the freedom of the people this needs to be considered. Maintaining equality among people means upholding their individual differences as well. And as human nature is not deemed to be flexible there is the limitation that in an attempt to establish social order human nature also has its limitations (Human Nature: A Conservative, Classical Liberal & Libertarian View).

Conviction of international relation to be cooperative rather than conflicting

With the two elements working well, believing in the good nature of man and that he can make his choice to protect his freedom, when there is a strong international relation then it is easier to bring forth progress.

Alain de Benoist gave one criticism on liberalism; according to him liberalism was based on the individualistic anthropology which perceives man as an individual and not as a social being. To further expound, he notes that liberalism is not a unified doctrine that often it has been interpreted as a divergent school of thought that carries on contradictions. It intends to present a market structure that is self-regulating and the government is a power that oversees the economic doctrines. Both government and market are viewed as models of collective identities and to embrace this membership in this two collective structure means to go beyond individualism. However, liberalism has the tendency to sever the social connections of an individual. To realize the optimum operation of the market it is necessary to forego of the individual structures and values, it means to cross the limitations and boundaries that separates one individual from the others (Johnson, 2018).

Liberalism stems from a strong motivated stand on political issues. There are also certain biases that are influencing the thoughts of liberals, and sometimes as individuality and freedom of each person is emphasized people are treated individually and differently rather than equally and the same. This is one of the risks that ensue with the task of the state to protect the freedom of its people, in as much as human nature is perceived to be good it may be influenced at times to commit errors. Therefore, it is a must to keep a balance in the responsibility of the state and the concepts of liberalism to avoid being labeled as unfair and pretentious.

View from the Right by Alain de Benoist 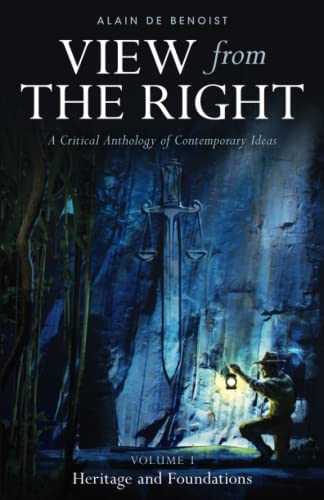 View from the Right, Volume I: Heritage and Foundations
Buy Now