Vernon Subutex 1, The Grimy Side of Paris

Some novels answer to the call of their time, to fill our need to provide for an encapsulation of our society and the transformations and the changes which traverse it, modifying it and twisting it into something different beyond our previous recognition, leaving us behind in confused awe, despair, joy, or simple incomprehension. Vernon Subutex, 1, this French language novel set in the streets of Paris, following Vernon Subutex, the former owner of a small music disk store, his life upended by the end of the industry, cast out of his previous modest life onto the streets by the death of the contact that sustained him (the oft-mentioned, but never met, Alex Bleach, his former music star friend who had paid his rent for years in his dark times, and who stands at the center of the whirling vortex of characters and intrigue which surrounds him) and with a new existence as a sans domicile fixe, or homeless person, in the muddled existence of Paris. Although it has been made into an English language book now thanks to a translation, this review is about the French version: I presume that the English version is rather similar, but until I read it, if I ever do, I have no way of knowing.

It is easy to write a tale of woe, one which pulls at the heart strings and commands your sympathy. Superficially, such a book is one which can be immensely satisfying, but it lacks the deepness and the profoundness associated with a novel that is more than this parlor trick. Thankfully, Vernon Subutex manages to avoid such a a simple story, and to choose one which is more sophisticated, advanced, and elegant. It is true, the story of a man being kicked out from his apartment, cast onto the streets, and losing his livelihood is one which is inherently a less than happy one. But the most memorable points of the following story are not simply those of him sitting on a bench in Paris, begging, but rather the relationships with people along the way, the little specks of light of gazing into the perspective of other people, be they as varied from an old and cynical film worker, to an an abusive ex-husband, to the mother of a dead friend, to a Brazilian transsexual, to a galaxy of other people along the way. These people are the ones who truly for the illumination of the novel, with their brilliantly cast personalities, their genuine opinions, thoughts, beliefs. Misery may be the common denominator, the universal heritage of almost everyone found within, but the genius of the book is to entangle this misery with the rest, to prevent it from being simply a story of either success or woe or happiness or success, but something far more complex and compelling.

For these people give us an illustration of our society, for Virginie Despentes is an author who plays around with a host of different themes: poverty, depression, politics (the book has been noted for its commentary on far right politics and ideas), sexuality, transsexualism, masculinity, the growth of internet's power and falsehoods upon society, islam, pornography, one's life crisis at 50, the list goes on and on. It is a refreshing look, one which castigates none, but prefers to see them, to understand them: few writers can both write about a young girl, daughter of a pornstar, who adopts Islam and give a real sense of her passion and cause, while at the same time writing about members of the extreme-right, or the extreme-left - the two cross over at times - without simply condemning them, but rather letting them speak and talk freely, to help us understand the milieu from which they stem.

The quality of the writing is something which too must be judged, and here is where Vernon Subutex truly shines in my opinion. It is a book which is deeply focused upon people and upon their lives, and less so upon the most common themes of descriptive glory, nature, the environment, cities, buildings... And yet it is one which deeply suits the needs and the style portrayed, with an extremely rich vocabulary of informal and colloquial French expressions, often times difficult to translate, which speckle the pages in huge numbers. It transforms the book from being a story which is merely set in Paris to one which plunges into the depths of the most shady, grungy, and grimy parts of life in the down and out in the French capital. It puts Vernon himself into an excellent spotlight as well, in this moody, lost, disenchanted, cynical, intense, masculine, grimy, proud man in his 50s, deeply imperfect and deeply human, a man who matches perfectly the environment around himself. The mixture of misery and this dynamic elan which constitutes Vernon is what transforms the book into something which can approach a thriller.

And yet it is also a book which can be at times difficult to follow, as it swaps from character to character, seguing onto new vectors and new visages, with little interest in whether the feeble mind of the reader can pursue and keep up with the author's unfolding plot. It takes, I feel, a certain mentality to be able to stay abreast of it: perhaps like one of the sans-abris of Paris itself, one should instead learn to simply accept the barrage of new characters who come, to realize that they need to be accepted on their own terms, that they are individual facets in their own right, and that their relevance, or lack of relevance, to the plot is not something to be explained right away. But for myself at least, I would have enjoyed it if the writer had done more effort to present and to draw back together some of the storms of different secondary characters that we happen upon as Vernon descends in his ever deeper spiral through the city of Paris, buffeted by the winds of fate and constantly finding along the way new companions and old acquaintances.

A brilliantly written, if sometimes elusive and difficult to follow book, as a commentary on contemporary French society, and as a story which is gripping in its evolution of its characters and plot, Vernon Subutex is a book which should be recommended to anybody with a joy for contemporary French literature, or simply good modern literature as a whole. Gritty, sometimes gloomy, but never hopeless, it makes the lives of a homeless man in Paris come alive with incredible clarity and compelling force. 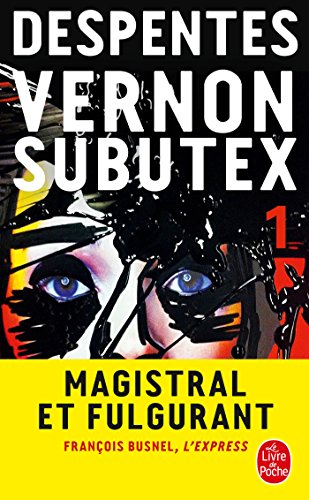