What Makes a Great Novel?

Have you ever compiled a list of your Top Ten Novels? This list took me about two weeks to complete. I compared several Top One Hundred Novels lists that are found in many different literary websites.

As I complied my list, I thought about what criteria I would use to make my decisions. I chose books which I read that had altered my views about life or influenced my worldview in some way.

This got me thinking about what criteria others used when choosing their list of greatest novels. So I started to explore what other criteria that may be used in selecting great novels. I have included comments of and criteria used by three men to choose great works of literature:

Mortimer Adler was an American author, educator, and philosopher who was influential in popularizing the idea of reading and compiling great literature.This scholar authored or edited more than fifty books. This included editions of the Encyclopedia Britannica. He wrote How to Read a Book (1940) which I found profitable in my personal study of history and literature. Along with Robert M. Hutchins he edited the 54-volume Great Books of the Western World (1952).

Adler listed three criteria for putting a book on the List of Great Books: 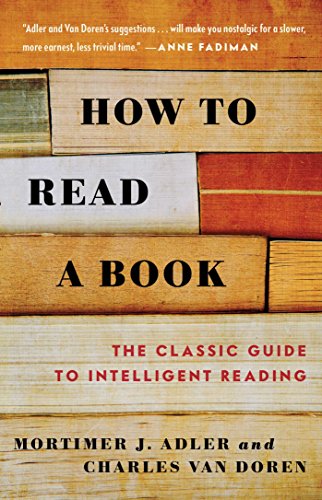 How to Read a Book: The Classic Guide to Intelligent Reading
Buy Now

Thomas Jefferson wrote letters to several friends and included lists for them to read in history, philosophy, religion, and literature.

"These by no means constitute the whole of what might be usefully read in each of these branches of science. The mass of excellent works going more into detail is great indeed. But those here noted will enable the student to select for himself such others of detail as may suit his particular views and dispositions. They will give him a respectable, a useful and satisfactory degree of knowledge in these branches."

Thomas Jefferson collected literary works voraciously throughout his life. A fire in his home in 1770 cause him to lament most for his beloved books. During the 1780's, Jefferson acquired thousands of books for his library at Monticello. Jefferson's library was always critically important to him. His reading and collecting of books acquainted him with a broader knowledge of the contemporary and ancient worlds than most of any world leader in his time. He sold his book collection the the United States government after the British burned the Capitol. His library formed the foundation for what we became the Library of Congress.

A resource that I discovered has compiled and organized a list of Jefferson's great literature. We have to remember that he did not have the benefit of the writings we have from the 19th Century until today.

I've included a partial list below. The complete list of history, philosophy, religion, and literature can be found here.3

Homer: The Iliad and The Odyssey

Jonathan Swift: Gulliver's Travels , A Modest Proposal, A Tale of a Tub, The Drapier's Letters

Another resource I found was the Literary Tourist blog written by Nigel Beale. The blog summarizes a list made by Somerset Maugham in his introduction to a book he wrote called Great Novelists and their Novels. It is a collection of essays about authors and their novels.

The complete list culled by Nigel Beale has been removed from his blog.

I have condensed four from the list of the nine criteria that Beale summarized from Somerset Maugham's book.

1) The book's theme should interesting to men and women of all sorts. The novel has to have broad appeal, read by people of all ages, both men and women, young and old.

2) The story needs to be coherent and persuasive and have a beginning, middle and end. Plot structure should be clear and produce a satisfying effect on the reader.

3) The writing should be simple enough that it can be read it with ease by anyone of ordinary education.

4) The novel should be entertaining.

As I read this list, I feel confident that the Top Ten novels I have selected fit the criteria listed by Somerset Maugham.

Have You Ever Considered Your Greatest Novels?

Have You Ever Made A List of Your Greatest Novels?

Summary of the Greatest Novels Of All Time

The selection of the Greatest Novels Of All Time are based on various criteria that are probably different for each one of us. I have presented evaluations of great literature used by two authors and one book collector.

After reviewing the criteria some great writers and thinkers have used as a measure for great novels, what do you think? Have you ever thought about why you like the novels you do? What criteria would you use when choosing certain literary works to be among your greatest?