I know what you’re thinking.

Comic books are for geeks, nerds, and people who are most likely to go to the prom with their mothers. People who go to comic conventions have lost every hand hold on reality and do nothing but talk about theoretical battles between The Hulk and Superman or whether the Justice League is a better team than the X-men or Avengers.

And they’d be half right. These guys, for the most part, are geeks. However, while they may have a secure IT career or blog to the point of distraction, they are relatively normal folk. Most of the professionals you’ve encountered have that secret geek persona that is impossible to divorce from their core personality – which also puts them right at home at a comic convention.

For some of you outside this group, you may wonder why someone named your production webserver Boromir, Merry, Frodo, or Bilbo.

I could spend pages and pages describing the types of geeks out there, but I’m sure you’ve had an inkling that your friend who has that unhealthy fixation on Star Trek (Trekkies or Trekkors), Doctor Who (Whovians), Star Wars (they still don’t have a name), and Lord of the Rings (LOTR for you people new to the game), is one of them. If you want the lowdown, you can always purchase I Love Geeks: The Official Handbook by Carrie Tucker.

What’s more important is that you’ll have to be patient for any PC problem you might have at work during the week of a comic con – because that’s where your geek went.

Okay, you’re not one of us. You obviously either don’t know or are dating a geek and you need to know what’s in store.

A comic convention is a huge city money maker that is held many times for multiple days where scifi fans (some say SyFy but I’m of the opinion that that abbreviation was a marketing ploy from an empty suit that just didn’t “get it”), comic book aficionados, horror, zombie, vampire, fantasy book fans, and the new upstarts into anime and manga, gather to meet their favorite writers, illustrators, and cult movie star actors in one place. And when they are not doing that they are meeting with many of the comic book dealers and buying as much geek merchandise and collectibles as they can – at a discount.

It’s hard to describe to an outsider why these things are so awesomely cool.

The major comic cons are broken into four major activities: 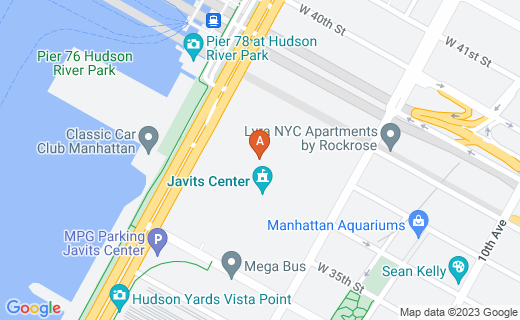 The location of the New York Comic Con. Easily accessed by cab, train, or bus in the area.

What are the Biggest Comic Cons?

There are three major comic book events in this country.

The biggest comic book event, by far, is the San Diego Comic Con. People come from all over the world for this ONE WEEK extravaganza. And the fans go all out. They come in costume or dressed as their favorite characters either drawn or in films. Other people come with their camera and autograph book. The panels are insanely good. It is not unheard of to get the entire cast of True Blood, The Big Bang Theory, Fringe, and Burn Notice all under one roof. This is where the legends assemble and where you’ll probably get a sneak preview of everything thing that’s coming over the next year.

I consider the next two comic cons to be good runners up. There’s the New York Comic Con which is the second biggest money maker for the city. It usually lasts about four days – Sunday being the best day for bringing the kids. While it is not on scale as its west coast counterpart, it is certainly not worth missing if you’re in the area. Typically, it’s held in the Javits Center in midtown by the West Side Highway. The New York Comic Con is good because, really, it's where most of these writers work and it’s where you’ll see the most literary action. If you’re looking for the celebrity angle, go to the San Diego one. However, if you want to meet writers and artists, come to this one. It's held in October.

The third is the one held in Chicago. This one gets a mix of all of them. You get a lot of cult heroes that visit this one. The 2012 one will have Stan Lee, William Shatner and Bruce Campbell as part of their VIP experience. It is held in August.

Geeks around the world have had a hard time growing up. Do yourself and do them a favor, don’t hassle them about their going.

They’ve been cursed with knowing that they know what’s really cool and no one believes them. Comic Cons are where they can congregate and truly partake in their passions. There is so much to do and more than not, with even a week allocated to a con, there’s so little time.

Even if you plan meticulously, very few people can go through the rigorous physical endurance of being at a convention for days. I can take about three days before I’m physically exhausted and most of the time, I’ll stay home on the last day to rest for work. This is after three days of carrying a back pack of my geek made spoils and autographed graphic novels.

It takes a lot out of you.

I mentioned the three biggest comic conventions around – that does not mean there are not others. Only last month, I went to a small comic convention in Asbury Park. Among the guests were the cast of Kevin Smith’s Comic Book Men. It was a great time and a good excuse to get together with fellow enthusiasts to discuss where we think the industry is headed and why some writer took the direction he took with a specific character.

Good deals on comic books and merchandise, meeting experienced writers, meeting cast members of great TV shows, and meeting fans that are as passionate as you are about the medium – you can’t beat that.

As for me, I got some of the best writing advice from the 2010 New York Comic Con Fantasy writer’s panel which had (among them) Jim Butcher (The Dresden Files), Joe Abercrombie (The First Law Trilogy), and Brendan Sanderson (Wheel of Time). They helped me look at my writing differently and that, in itself, was worth the price of admission.