Who is the best Batman villain, baddy, arch enemy?Joker Vs Two Face Vs Bane Vs Catwoman Vs Scarecrow Vs Ra's Al Ghul

Batman has so many cool enemies it is hard to choose which one is the best. They all have their own personalities and bring their own kind of evil to the stories.

So who is the best supervillian? Is it the evil twisted Joker, the schizophrenia Two-face, the evil opposite to Batman - Bane, The sexy Cat Woman, the scary Scarecrow or the mastermind that is Ra's Al Gore?

I have also included the likes of the Penguin and Riddler for your enjoyment.

Will the joker get your vote?

The Joker, what can we say about this psychopathic, mass murdering, schizophrenic clown with zero empathy supervillian. He is a master criminal with a clown like appearance.

He is known best for being Batman's archenemy. He started life as a comedian who found life too hard in this and therefore turned to crime. He was one of many criminals on Gothams streets, disguised as the criminal Red Hood when Batman comes after him. He then falls into a vat of chemicals while Batman was after him. These chemicals bleached his skin white, dyed his hair green and his lips ruby red. It was also attributed to his insanity.

He has been the cause of many tragedies in Batman's life and yet he has no notable superhuman qualities. Instead he relies on his massive intellect and a series of gadgets and tricks to cause the chaos and revenge on Batman he so desires.

A close friend and ally of Batman, Harvey Dent was the District Attorney of Gotham City. However this all changed when criminal boss Morini threw acid in his face. This severely disfigured one half and yet left the other unharmed.

Dent escaped from hospital and descended into madness because of the constant pain he was in. He became obsessed with opposites and developed a second persona. The villainous Two-face was born.

His trademark was to wear clothes that consist of two halves, made of different materials. He also carried a double-sided coin with one side scratched which he uses to make up his mind on how best to cause havoc.

He used his contacts and intellect to shift power from the mob bosses to himself and other costumed criminals in his time.

He is not all entire evil though; he is a character that is in conflict all the time, and thus relies on the flip of a coin to decide whether or not to commit the crime.

Maybe Bane will get your vote?

Bane will always be known as the 'Man who broke the bat' for the time he broke Batman's back, which forced Bruce Wayne to give up his crime fighting while he recuperated.

We first met Bane as an escaped convict from an island prison in South America. He spent his childhood in this hellish place, the prison called Pena Duro. Although he started life with a distinct disadvantage, he read as many books he could get his hands on, he also spent many hours a day in the prison gym and of course he learnt to fight down there. This was a way to stay alive but with the sort of prisoners around him - mass murders - he really needed to know how to fight well and be merciless with it.

Due to experiments involving derivative of the drug Venom, he has abnormal physical strength. It also gives him great reflexes and incredible healing powers and stamina. Because of this though, he has a dependency on the drug and therefore must wear a mask to get his needed dose.

Bane is one of Batman's most intelligent and powerful of foes - one of a few who have bettered him in hand to hand combat. But he used his intellect to get to Batman in this - he helped the inmates of Arkham Asylum escape by blowing up an outer wall. Batman then spent the next three months rounding them up until he was exhausted. When he returns to Wayne manor, there is Bane waiting for him.

How about the sexy Catwoman?

Catwoman, Selina kyle, started life as an orphan who, in order to survive the hostile streets of Gotham, took up being a thief. She learned martial arts and perfected her skills in cat burglary.

She has a complicated history with Batman - often she eludes capture, occasionally working with him, frequently flirting with him and sometimes actually got a little more serious than that.

One reason Batman can interact with her like this is because killing is against her moral code. Her only true crime is theft and can often steal from the true criminals of Gotham city.

She is often portrayed in a sexy cat-suit, with Ann Hathoway making this character look amazing recently but she is a lot more than just a sexy feline - there is a lot more depth to this character, with good intellect, a strong moral fibre that she does not waver from, and you almost feel sorry for her, or at least see why she has followed this path, with how her past has spanned out.

Is the scary scarecrow your favourite?

The Scarecrow, also known as Dr. Jonathan Crane, is an insane ex-psychiatrist who uses a variety of drugs and psychological tricks to instill fear in his victims.

His costume is inspired by a horrow fable - the legend of Sleepy Hallow, which he makes himself look like a scarecrow, hence the name.

The innocent people of Gotham are the guinea pigs for the Scarecrow as he 'studies' the effects of fear. His crimes are never to do with wealth because of this.

His greatest weapon is his fear gas that he uses to cause his victims' worst fears to come true. His mask has been made to stop him effecting himself by the gas. Although, overtime he has become immune to it - this causes fits of depression though. He is an accomplished martial arts expert too, although this is only used as a last choice.

How about the evil mastermind - Ra's Al Gore?

'Head of the Demon' in Arabic, Ra's Al Ghul is an international terrorist whose ultimate goal is to eliminate most of humanity as he sees them as currupt. This goal is aided by his many centuries of rejuvenating in the chemicals of the Lazarus Pits that has granted him a lifespan of several hundreds of years.

Batman is seen as his worthiest opponent but altermatly an ideal successor to his cause. He knows of Batman's secret identity and they usually battle over interlect rather than physical prowess. This relationship is further complicated by Batman's romantic entanglements with Ra's Al Ghul's daughter, Talia.

Little is known of his early years before he entered the Lazarus Pits but he is known as a brilliant master strategest and he is the master of a group of followers who aid him in his quest.

Batman does not share his view of the world and altermatly fights to save these 'currupt' humans.

How about the Penguin, is he the best supervillian?

The Penguin, Oswalk Chesterfield Cobblepot, was teased for his short nature, his obesity and his bird-like nose throughout his life, which altermatly led to his alter-ego as the Penguin because of the taunts from children about his nose. This made him very much an outcast, which altermatly drove him to get revenge on people. Again his astute mind, with his scientific skills, allowed him to develop weapons to intimidate and control others.

His weapons of choice would be his umbrellas, which come in varies guises. He was forced to always carry an umbrella as a child from his over protective mother because his father died of pneumonia from being drenched.

The Riddler - does he get your vote?

The Riddler, born Edward Nigma, loved puzzles as a child and he gradually incorportaed them into his criminal career. As a boy, his father phycially abused him, which left him with a compulsion to tell the truth (which he got around by placing the truth behind riddles) and he has an isatable disire to prove his superiority of interlect over others.

He is usually pictured wearing green clothing, with question marks over it. He also likes to carry a question mark- shaped cane. 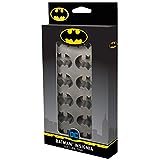 Who is the best Batman nemesis?

Batman has some amazing enemies, making him one of the best superheros of all time. Each one of them has their qualities and Batman has to be his best against each and every one of them.

They are not all included in this hub either, but I have tried to include the enemies that people will remember the most (probably thanks to the recent batman trilogy). Although I have not included every single enemy here, I do think I have included a lot of the greats though.

So now it is your turn to choose which one do you think is the best supervillian that Batman has to stop.