Why Do I Wear My Hair Long; A Confession of a Senior!

Selfie of the Author, Don Bobbitt

Why do I keep my Hair long?

"Hey Don, Why does someone your age have Long Hair?"

You would not believe how many times, over the years, I have been asked this stupid question.

One significant thing that I have learned though is that when you don't conform to "that other persons vision of normality" you often end up being a source of personal confusion for them.

I've been questioned about this by family members, friends, casual acquaintances, and even co-workers, over the past several decades, and, I finally turned how I answered these silly questions into a little game for myself.

Depending on the person, and how well I knew them, and the circumstances at the moment, I would usually tailor my answer to this inevitable question for the biggest laugh, or on occasion, just to see how easily the other person would be confused by my response.

Reasons for having Long Hair

In all honesty, I do feel that my personal hygiene, and my personal taste in clothes, among such things, are my business, and when I'm questioned as to my choices, I often see the question as an intrusion in my personal life.

But, in the corporate environment, I have to control myself anyway; so in my mind, I have a personal list of responses, developed over the years whose purpose is simply to make the questioner move on to something else to talk about.

Here are a few some of my favorite responses:

Using these have all been good fun for me over the years, for different reasons, and most people realize from my response, or lack of one that they have meddled too much into my life and will back off, leaving me alone.

And, I have found that there are the persistent ones, who must have some kind of personal problem that forces them to be so rude, so with them I really don't feel bad about my flippant responses to them, at all

The real reason why I have long hair is a multi-faceted thing, and to most of you, probably pretty boring.

First of all, in High School, in the early 60's, I actually had the Beach Boys look. I had a FlatTop haircut, with bleached blond hair in front. Why? Well, I was a teenager, and I had to fit the mold, just like everyone else.

I later joined the Navy for a few years, and when I my enlistment ended, I was lucky enough to find a good wife. And, to pay the bills of a new family I went to work, and my wife and I started building a life of our own.

I had the long hair, down to the shoulders for a number of years in the late Sixties, when it was fashionable, and I eventually cut it short in later years, again as fashion dictated. 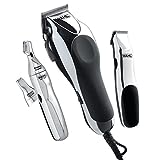 Wahl Clipper Home Barber Kit Electric Clipper, Touch Up Trimmer & Personal Groomer, 30 Piece Kit for Professional Style Haircutting at Home – Model 79524-3001P
I have this kit and I use it to trim my hair as well as my beard. They make a quality product and mine has lasted for several years so far.
Buy Now

Being Ill and going through CHEMO

Then in the early Nineties, I caught a rare disease, called Wegner's. It was a near fatal disease for me, and I went through a long period of experimental medical treatments and radical drugs as a range of Doctors tried to keep me alive.

The disease pretty much wiped my Kidneys out, before the Doctors could stop it's progression, and after I was stable, I still had the disease to be dealt with.

For one of the treatments I went through, the Doctors put me through several months of Chemo-therapy, on the premise that it would possibly improve my kidney function.

At that time it was fashionable for couples like my wife and I both to get our hair done by a hairdresser.

You know, one of those, "sit down and have a glass of wine while I take care of you" types of places.

We tipped well, and the guy was pretty good at his job, and when I became ill, he was very upset, along with us.

Anyway, the Doctors were very adamant that I was going to lose all of my hair from these treatments, so I decided to have a little fun with the whole CHEMO experience.

I mea think about it, if I was going to lose my hair, I figured "let's have some fun" so I went to my hairdresser, the week before I went on Chemo, and told him to color my hair jet black.

He, of course, was appalled, but after a couple of glasses of wine he saw the humor of my plan, and said OK.

It was great! Over those weeks on Chemo, I was seeing a number of different doctors a couple of times a week, for different treatments and tests.

And when I saw all of these medical professionals, I would show up with Black hair and the next time I was a bleached Blond while the next, I would would be a flaming redhead. In between, I might have a full tight perm, or the next it would be straight long hair.

It cost a little extra, these multiple visits to my Hair huy, but I enjoyed the shocked looks I was getting, and anyway, it was all going to fall out at any time, right?

I am that one in a hundred, or whatever the statistics are, that doesn't lose his hair when undergoing Chemotherapy. Not a single noticeable hair was gone after six weeks.

My Doctor laughed at me and told me about how lucky I was.

A little dejected, I then went to my hairdresser, and told him the good news, and I tasked him to "get the color and curls out", and make my hair look like it did before the Chemo.

He gave me an odd look, that turned into a broad grin and then degraded into uncontrollable laughter.

He walked over, poured two glasses of wine, handed me one and told me to sit down, which I did.

He then explained to me that, it wasn't his fault, in fact it was actually mine, because no one abuses their hair like I had done over the past few weeks, and expects to escape without hair damage.

I frowned and said; Hair Damage?

He laughed, and explained that I had Fried my hair, and to fix it, the best solution was to just shave my head, and let it all grow back, new, and undamaged.

I thought for a few minutes, and accepting my fate, I grabbed his bottle of Chardonnay, sat down and let him shave my head.

The great thing about having Long Hair is the fact that I don't need to get it cut every few weeks.

I had a Hair Epiphany

As my hair grew back, it again became the subject of many questions and conversations with friends, and even strangers.

The interesting thing was, as I explained about my Chemotherapy and all, most people really seemed to care more about my health than my hair situation.

So, I just kept letting it grow, and then, one day, I was able to pull it back into a Ponytail.

I suddenly realized that I had not been to a hairdresser or barber in over six months. And the thought of planning for and going to get a haircut, after all of the health problems I had gone through, just seemed like a nuisance to me, rather than a necessary service.

So I quit getting my hair cut!

It was an easy thing to do.

I have straight hair anyway, so maintenance entails washing my hair when I am in the shower, and then combing it and pulling it into a Ponytail when I get out of the shower.

Once or twice a year, my wife will grab a pair of scissors, and cut off the Dead Ends, whatever they are.

That is the sum of my hair care and maintenance program. No more being told my hair looks shaggy, or my sideburns are too long, or I need a razor cut, or whatever.

It grows of it's own volition, and I just don't worry about it.

Another Advantage of Long Hair!

There have been some other advantages of having long hair, in a world of short haired people.

First of all, it was easy for people to tell which person I was in a crowd or a large meeting. I was the guy with the Ponytail.

As I aged, I was the OLD guy with the Ponytail.

Another thing of interest is that, as an Engineer, I worked in a high-tech business.

On top of that, I spent the next dozen years or so in the R&D section of our business.

Internally, the R&D world is a very competitive area of a business, and pretty much everyone is a little wierd, typically young and highly educated.

Oh, and universally, the people are non-conformist, to say it nicely.

I found that being older than most of them wasn't as much of a hinderance in communicating with my co-workers over those years as I would if I didn't also look a little non-conformist myself.

Strange but true, I am afraid. I actually fit in, by not looking like "an Old Man", but like a weird Old Engineer..

Now, I'm retired and living the good life, as they say.

So, I've been asked; why don't I just cut the damned stuff off?

Well, I invite you to pick one of the reasons you see listed above, because, you see;

Besides, I don't know but I hear that, with all of the fashionable baldies running around today, they have a lot of nice head polishing products on the market. HMMMMMMM? Maybe?

I am actually just having too much fun living my life, even if it is with socially disturbing long hair! And, before you ask anything else.

I need to stop here and brush out my long Hair!!

Have a Nice Day!

How to Scissor Cut Mens Hair