Writing a One-Sentence Story; Exercise in Creativity or Frustration?

Can you really do more with less?

A little while ago I read this hub about using a single sentence to tell a story. It didn't tell a complete story, mind you, but it did (or was supposed to) set the stage so you would want to find out more.

The upside to this is that if you do it at all well, that exercise in frustration known as the "Opening Sentence" will hook people from the first. Consider this classic gem:

Poetry, isn't it? Of course, Charles Dickens' A Tale Of Two Cities is filled with such wonders from beginning to end. And a poetic first line can paper over a multitude of deficiencies in the early chapters. But on the other hand, a bad opening line can really kill a book. Let's take this equally famous (though in a different way) example:

It was a dark and stormy night.

Think you know that one? Sure! You've read it a thousand times as Snoopy sits on top of his dog house, pounding out his latest deathless masterpiece, only to give up after a page. It's actually the opening sentence to Madaleine L'Engle's A Wrinkle In Time. (And I bet you thought it was something else!) The actual opening sentence that a lot of people know about comes from Edward Bulwer-Lytton's 1830 novel, Paul Clifford. Here it is:

It was a dark and stormy night; the rain fell in torrents — except at occasional intervals, when it was checked by a violent gust of wind which swept up the streets (for it is in London that our scene lies), rattling along the housetops, and fiercely agitating the scanty flame of the lamps that struggled against the darkness.

Nothing like overdoing it a bit, eh? Actually, though I've never read the book myself, several articles I've read about how to construct an opening sentence say that the novel isn't bad. But who wants to keep going after they've slogged through that swamp of an opening sentence? Not me!

Which brings up one of the pitfalls of the One Sentence Story, namely that in an effort to get as much into as little as possible, you make a run-on sentence. You know, when it's actually three or four sentences, but instead of periods the author will use commas and semicolons. As someone who dreams of getting his novel published, I understand the allure of this, but trust me, it doesn't work.

Really, what I'm reminded of more than anything else is the faits divers, the old French journalistic practice of writing a little story about murder, mayhem or death that had actually happened, in three lines. Rediscovered recently, the anarchist and art critic (that line is used in every single description of him, if he were still alive he should get it trademarked) Felix Feneon. Here are a couple of examples:

Mme Vivant, of Argenteuil, failed to reckon with the ardor
of Maheu, the laundry's owner. He fished the desperate
laundress from the Seine.

Finding her son, Hyacinthe, 69, hanged, Mme Ranvier, of
Bussy-Saint-Georges, was so depressed she could not cut
him down.

And my personal favorite:

Scheid, of Dunkirk, fired three times at his wife. Since he
missed every shot, he decided to aim at his mother-in-law,
and connected.

Ah, the elegance of economy! If I could figure out how to write like that on a regular basis, how happy I would be!

It's a great exercise, and one I highly recommend! Have at it!

Here are a few attempts of my own, I bet you can do better!

*Missing a shoe and her skirt torn in three places, Sarah stared at the ravine in despair.

*Todd's tailored suit and perfect hair made Bonnie think, "Too much red meat."

*Tim was a great kid and a straight A student but cars were not meant to go 80 mph while upside down.

*Slimy, disgusting and gross were three adjectives that flashed through little Jamal's mind when he saw the dog salivating.

My favorite one-story sentence is by: 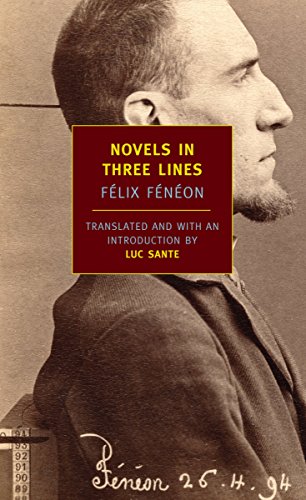